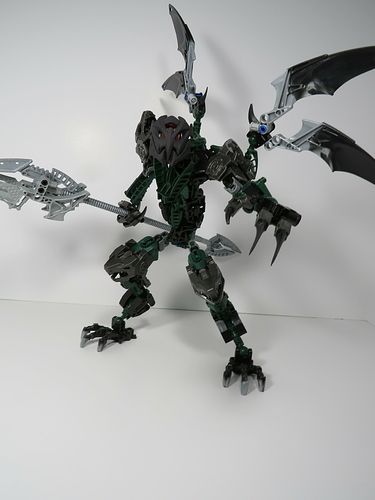 (Credit for the Great Mask of Incomprehension goes to KhingK)

Initially, when Teridax revealed his plans during the Convocation, Malix was in favor of the his grand scheme, though his mind was changed when a Toa of Stone, who used a Great Mask of Clairvoyance, informed Malix that he saw a vision of the future. Though the Toa had not seen much of what was to come, he saw that Teridax’s plan would result in the deaths of thousands, if not millions, of Matoran, not to mention the whole of the Brotherhood of Makuta. Malix was horrified of what the Toa revealed, and vowed to do whatever he could to prevent Teridax for completing his plan.

Sometime after the Convocation, Vaha Nui was caught in its own civil war, which started because of a dispute between two villages: one of Ko-Matoran, and the other of Ce-Matoran. After a few months, the allies of the villages joined the fight, and than the other villages’ allies joined after that, until the whole island was consumed in the war. Malix, along with his Toa Hagah and Rahkshi, fought long and hard to end the war.

The Vaha Nui Civil cost over a thousand of Matoran and Toa their lives, including most of Malix’s Toa Hagah. Because of this high death toll, Malix did something almost no other Makuta had ever done before: he created Matoran, lots of them, to replace the island’s desolated population. 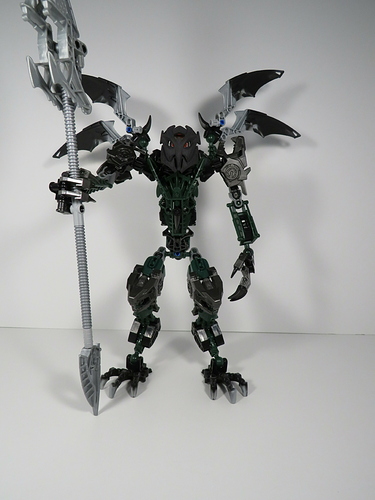 All right, with all of that out of the way, we can now move on to the MOC. Malix’s legs are inspired by General Grievous’ legs’ design. Unfortunately, he’s almost impossible to pose, due to his size. 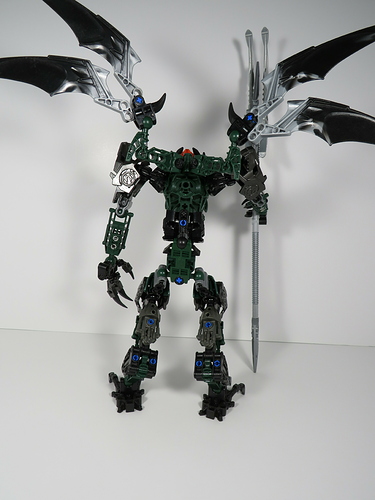 Here’s a view of his back. There’s not much I can say here… 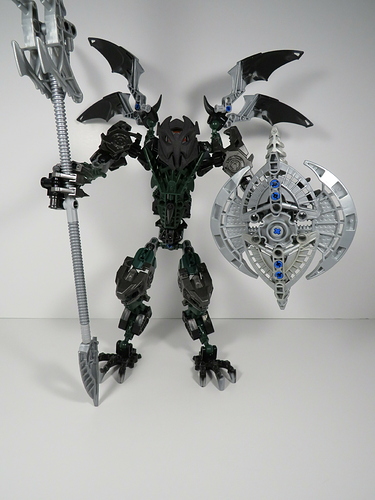 Here’s the shield I was working on for him, but I think it just looks too complex. Not to mention, he doesn’t really have any good way to hold it, besides how he has it in the picture above. 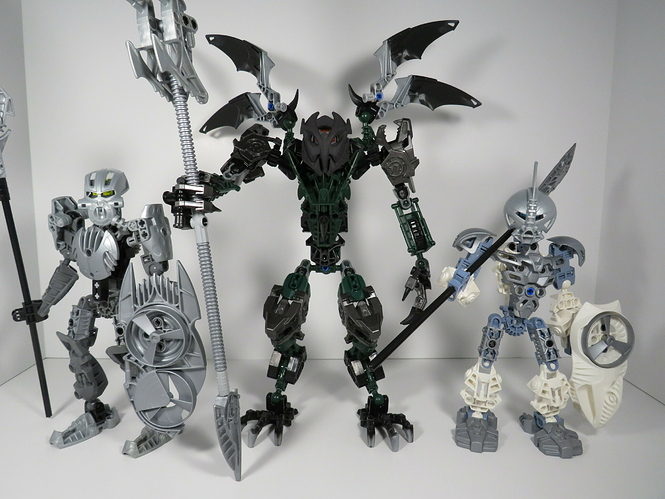 Finally, here’s Malix with a Toa of Sonics and a Toa of Ice, who are two of the surviving members of his Toa Hagah team (there’s also a Toa of Gravity, but there’s no way I can build him

Thanks for viewing! Hopefully I’ll be able to build the rest of the Toa Vaha (which includes an update for my self-MOC) in the coming months.

neato. I like the idea of a Makuta not being quintessentially evil. coughmyownvillaincough

I like the repeated use of the Bulk helmets. Gotta love those digitigrade legs too

repeated use of the Bulk helmets

They’re actually not Bulk helmets, they’re… okay, I forget what that creature was called, but they came from the Savage Planet sets. I just got a bunch of that piece in random part lots

Seriously, though, great work on the MOC and on the fanon.

It left me wanting more, desiring answers about things like “what were these new Matoran like?”, “Dark Hunter Invasion?”, and “Will he fail to stop Teridax, or will the timeline deviate from the official story, resulting in Malix’s survival?”
Very well done.

Very cool, I really like the use of the Fangz heads on the shoulders and knees!