Sorry it has been so long since I’ve posted. I have been super in real life with work and such, I only have time for one or two drawings a week. What follows is a pitch that might be a bit outdated, but I think still holds up. Keep in mind this is my own head canon, so it branches away from the cast’s canon quite a bit.

##Makuta
After Makuta’s banishment, he lived out the rest of his days withering away in his mortal form. During his time alive, he was an instigator of countless wars, puppeting the matoran into needless bloodshed. He met his demise at the hands of the last Toa, who slayed the mad tyrant once and for all. There were no tears or ceremony for Makuta, his body was left to rot where he fell. 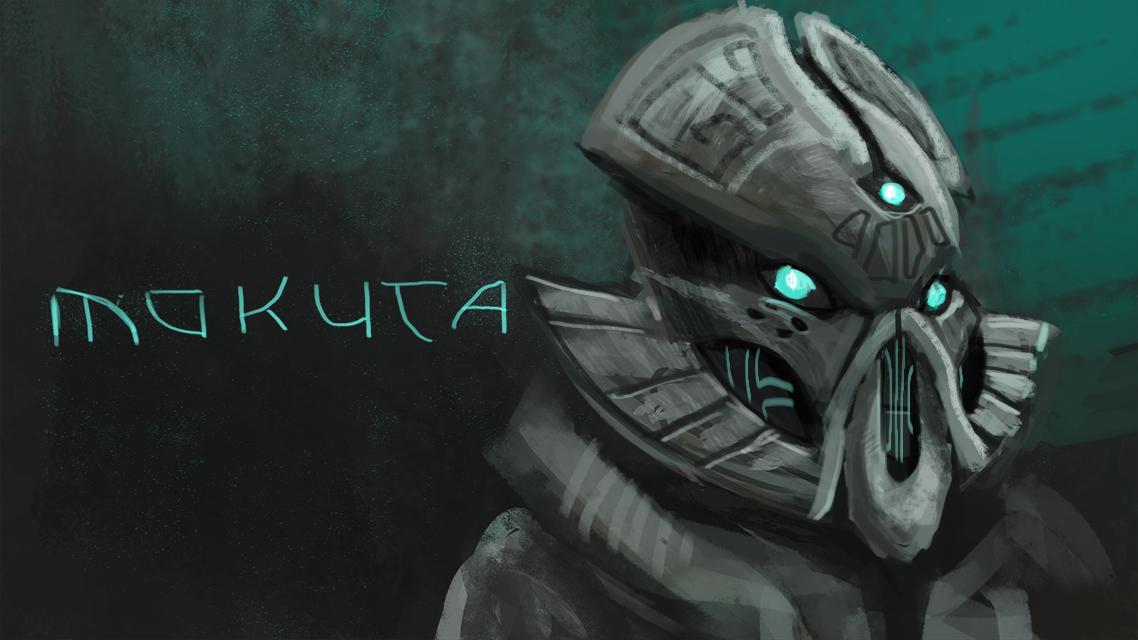 ##Origins of the Brotherhood
Two sisters, known only as the Bahlrag, happened across Makuta’s remains. The Great Mask of Control took sway over them, filling them with the knowledge and wisdom of the Makuta. They took the mask across the Island, indoctrinating Matoran where they gained entrance. One by one, the mask took hold of them. They longed to see Makuta wear it again. 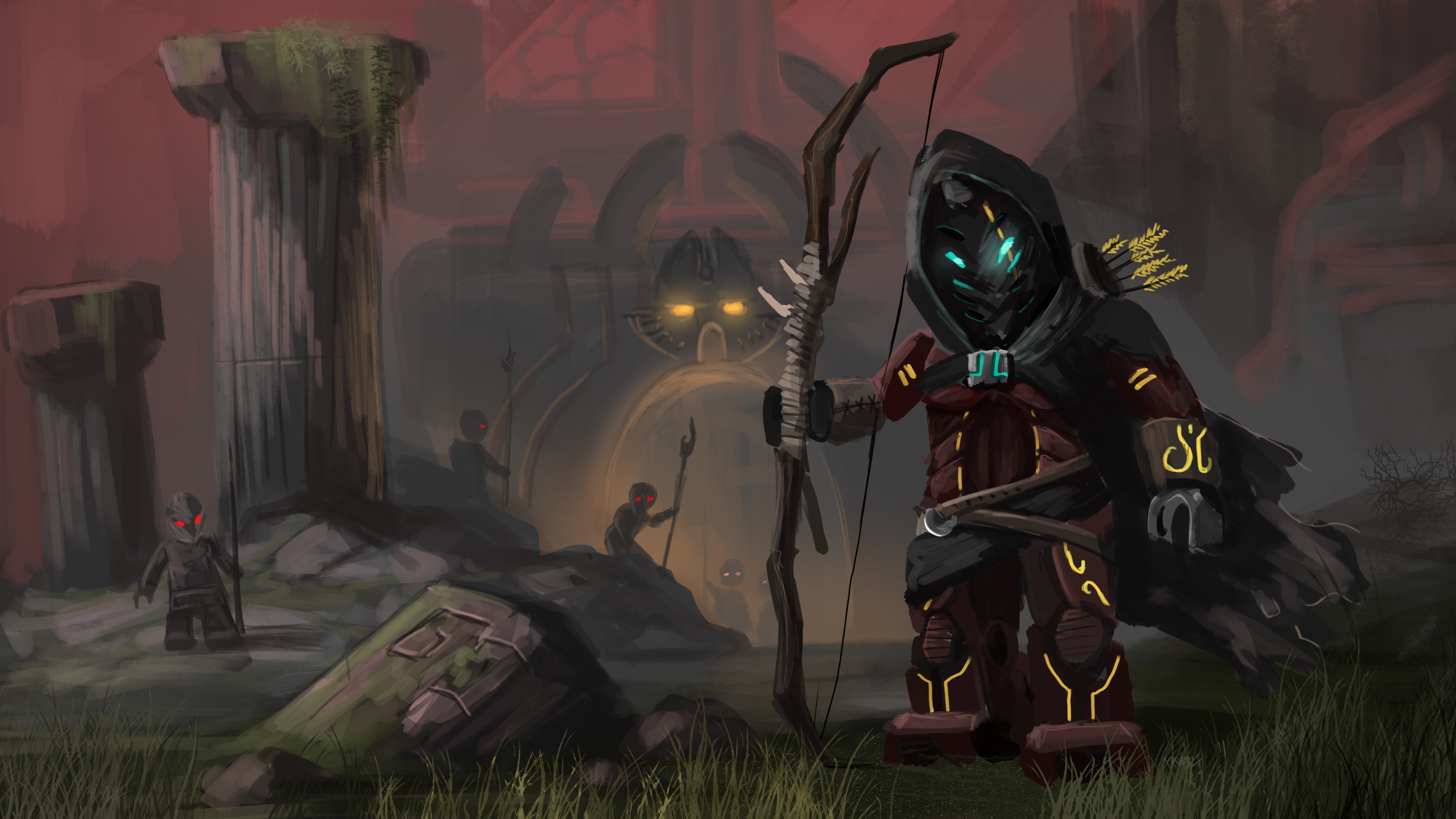 ##Wheels Turn
The Makuta Brotherhood had many unnatural practices, dark magics and sorcery. Artifical Kanohi masks, hybrid Rahi, spellcasting; they turned a blind eye to morality in order to achieve their goals. For years they schemed, planned and honed their skills. Rumours of an ancient mask of power that could null the matoran’s defeneses circulated- the Mask of Time. 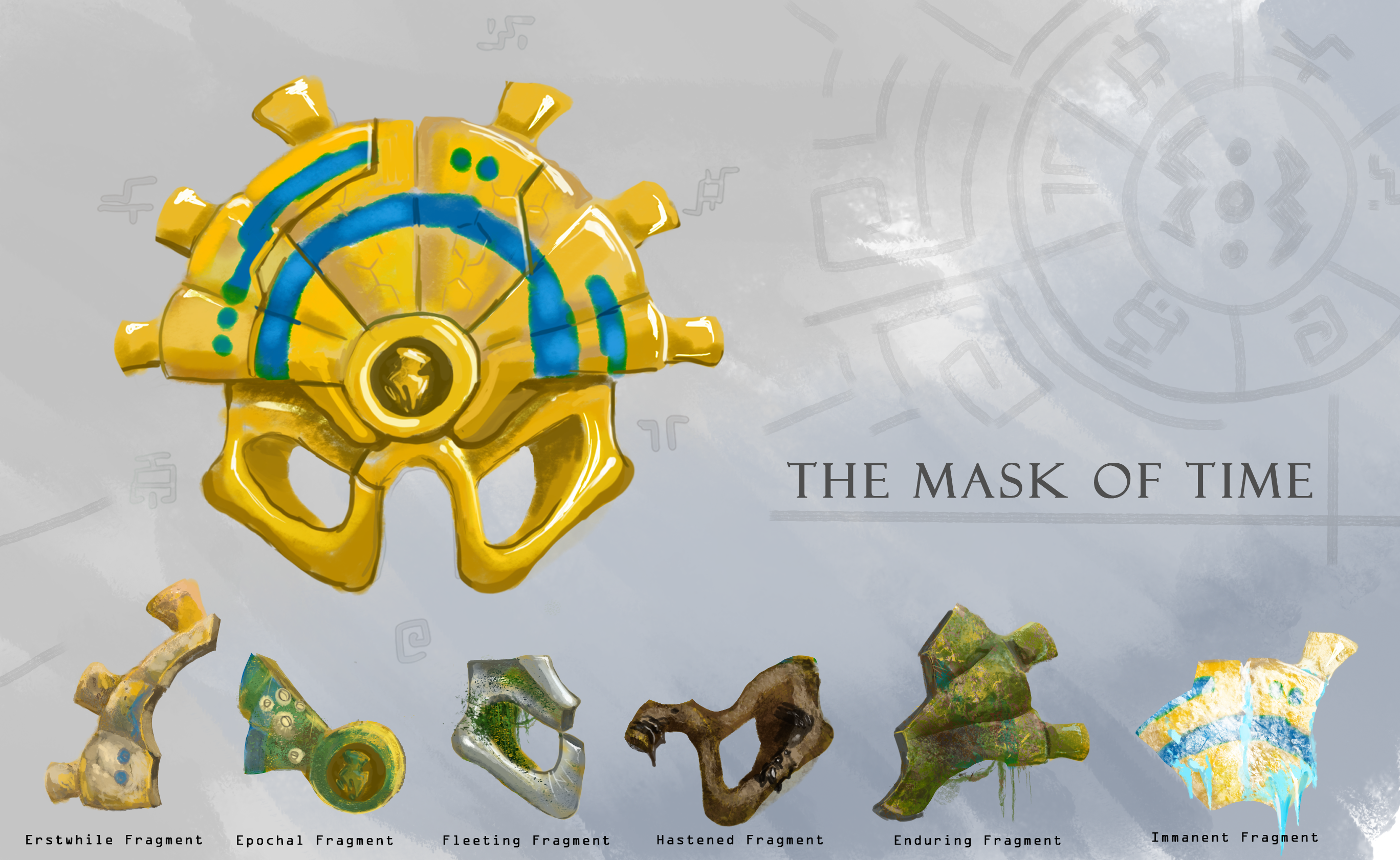 ##The Rahkshi
The Rahkshi are one such a hybrid, the culmination of all the Matoran’s spellcasting. Only they could wear the great Kanohi mask of Time, a shattered relic form a time long past. Armed with weapons and wit, the Rahkshii hunted for the scattered shards of the mask. 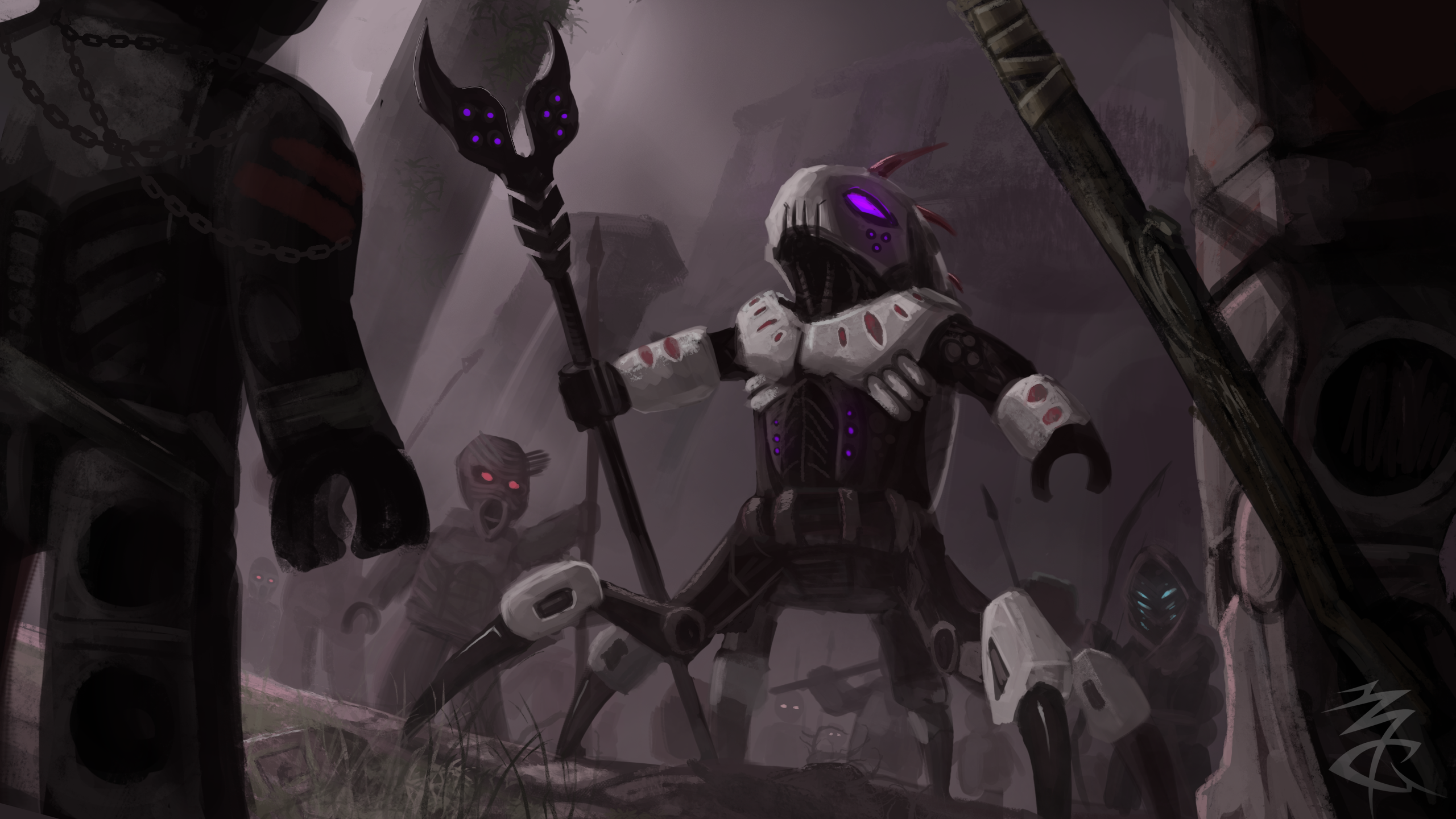 ##The Nuva Symbols
After collecting the mask of time, the Rahskii channeled it’s temoral powers to place the mainland in a frozen state. Vast cities stood still, defenseless. In the heart of the great capitol cities were the Nuva symbols, ancient relics of creation and the source of each regions element. Save for unexpected return of the mythic toa, the Rahkshi could stroll in and take the symbols.

##Nautali
This is a completely original concept on my part, with the help of @Phoenix. Cryoshells, or Nautali, are how Matoran reproduce. The large metallic chambers are relics or creations, given to the mortal matoran my Ekimu to further their kind. With a donation of elemental energy from two parents, the Cryoshell synthesizes are a new baby matoran. 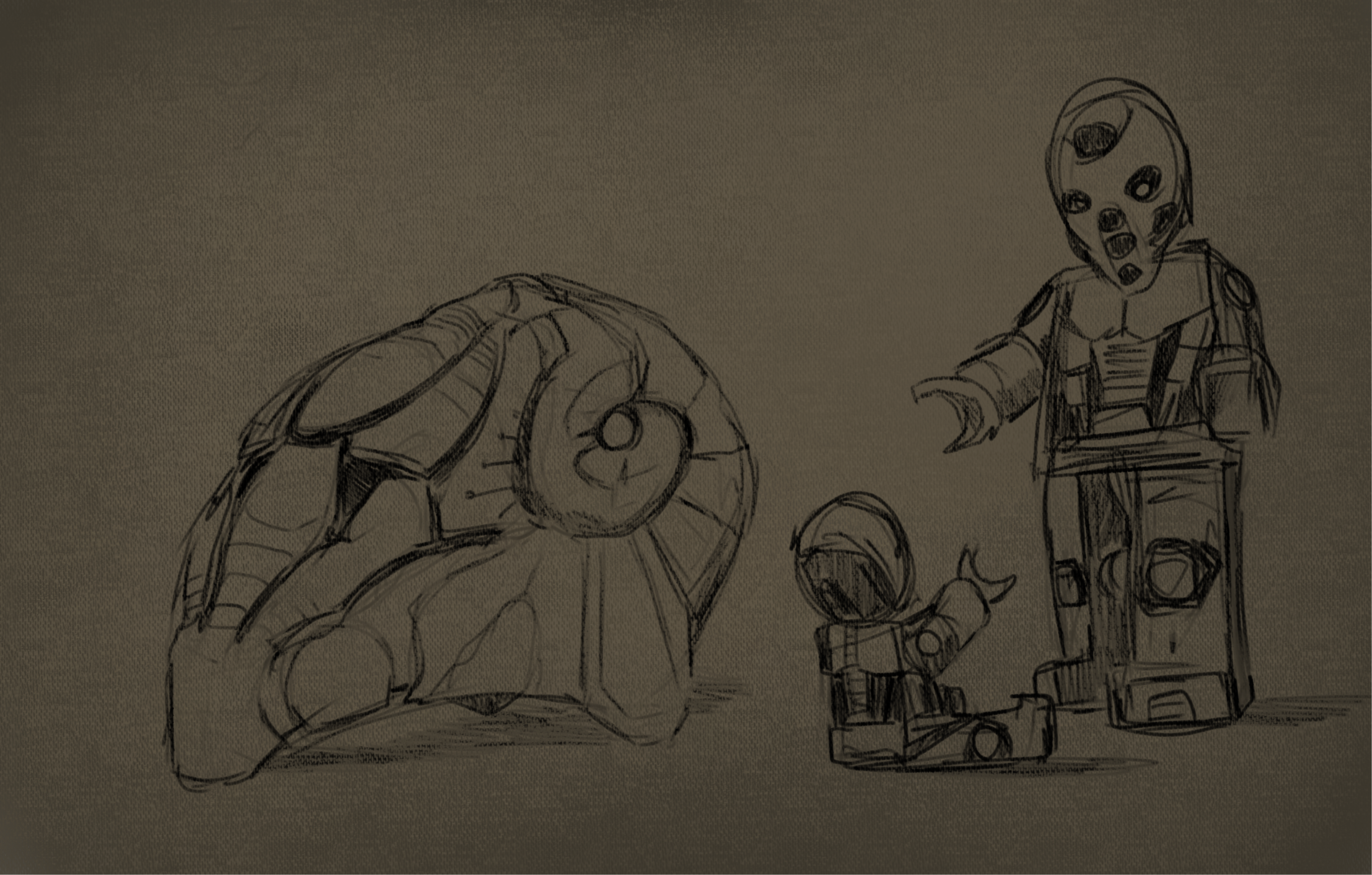 ##Makuta Reborn
Stealing away a sacred Nautali, the Rahkshi prepare to complete their plans. Using the Mask of Control as a memory imprint, and the Nuva Symbols as parental energy, the Rahkshi literally rebirth Makuta. Though small and weak, the small Makuta bears all his memories. With time, he can grow into the unstoppable thread he once was, inciting violence across all of Artkahta. The Balrag’s dreams will be realized.

Again, I love this a lot, but I just can’t get past the minifig look. Nevertheless, it’s really great art and I love the lore. Really, it’s just my problem. I love the Cryoshells/Nautali and I hope that gets into canon. I actually had the similar idea with Okotans, but decided to go with the route that six elders helped build new ones.

Cyroshells? Finally, we can get closer to the truth!

I still think metru red and trans purple would be a gorgeous color scheme for Makuta, perhaps with black/gunmetal to tie it together, at least, the blue doesn’t feel Makuta, at all.
Also the mask has an almost, jolly? look to it imo, not sure how to fix that, sharper corners maybe? I think it’s mostly the eyes.

I critique on the Makuta visual front because there’s nothing else I can find wrong with the pitch.

I can just picture a baby Makuta now.
High pitched voice “You cawot deestwoy me! FOR WHIE AM NOTING!”

I can just picture a baby Makuta now.
High pitched voice “You cawot deestwoy me! FOR WHIE AM NOTING!”

I sort of imagine his body would be a little further developed, and not quite a baby. This felt like sort of a callback to his tohunga form in g1, a deceptively small thread with immense power. Still… this is funny.

hmmmm, interesting idea on makuta being reborn weak and progressivly getting stronger, kinda like Voldemort, say, would Makuta be super weak and crippled or would he just be a small matoran child kinda thing?

Though he’d be born in a child’s form, he’d have an accelerated development. This could be in part to the raw energy of the nuva-symbols channeling the Nautali. He’d quickly grow to a full sized matoran, with a complete memory of who he was and what his purpose is. Since much of his consciousness was grafted to the Mask of Control, this would actually be more of a Makuta clone… but still Makuta for all intents and purposes.

t least, the blue doesn’t feel Makuta, at a

This is a new generation of bionicle. The g2 Makuta beared hardly any resemblance to how he did in g1. I actually really like this Makuta design, as yes it doesn’t look completely sinister, however it does still have a very intimidating look to it.

I have been looking for this art everywhere Oomy, and finally, here it as z! As always, fantastic job, and I really like your Matoran Creation pitch.

With G3, we have an opportunity to reinvent the franchise. I don’t that should be wasted by recycling old concepts.

I’m highly fond of the many concepts proposed here. The premise of the Nautali being a means of reproduction amongst two Matoran is brilliant, really adding a more unique take on how they are created. The colors used for Makuta feel a little dull, but the design of his mask and all the tunes running along it give him a great presence.

I think all of this sounds excellent.

Gunmetal with baby blue eyes and highlights doesn’t exactly say “big bad” to me, that combined with the soft eyes and almost jolly looking mask make him look more like a turaga of earth tbh.
He’s supposed to be the main villain, and as oomatu described a cunning cruel dictator that caused years of bloodshed and unrest, a “mad tyrant”, the current concept art doesn’t reflect that, at least imo.

The cast described Makuta as a smart calculating character who is not usually in the front lines, but in the background scheming and such. This portrayal of Makuta I think fits that description. Also because of this description, I don’t picture G3 Makuta as a huge sinister evil dude.

That describes g1 teridax and g2 Makuta, and they both looked imposing and powerful, I don’t get your reasoning, Makuta can be a physically imposing figure and still be the shadow puppeteer who prefers to avoid direct combat.

He can still be physically imposing, but I’m saying that he shouldn’t be the stereotypical big baddy that is all red and black and huge. One of the reasons that I like this Makuta is because of the unique colors. I also don’t see your point on this Makuta looking like a good guy, because he looks pretty sinister to me.

he shouldn’t be the stereotypical big baddy that is all red and black and huge.

why? I’m not saying I want that necessarily, but why shouldn’t he?

One of the reasons that I like this Makuta is because of the unique colors.

I also don’t see your point on this Makuta looking like a good guy, because he looks pretty sinister to me.

the aforementioned colors give off a cool harmless appearance and the soft eyes and rounded mask create the look of a soft sage rather than a tyrannical god-king.

this design would work great as a sage for one of the regions, but it isn’t makuta.

@Payinku
Again please keep this type of nitpicking arguments off of my threads. You can have a civil discussion without splicing each other’s sentences to smithereens. Also keep in mind this design is still in the works, and merely a suggestion for how to present Makuta.