It’s a long title, but it gets the point across. I’m not going to type too too much since what I’m here for is to the point. I was about to put up a post involving a M.O.C.only to have the site tell me there’s a curse word in the title, when there clearly isn’t, so I couldn’t put it up. The closest I could find was the word “Salvage”, which you can probably find the word yourself. There is basically nothing else in that title that could be misconstrued as a curse word.

That means what ever algorithm the site is using actually picked apart every single word, not looking at the word as a whole picked out what ever it found as a curse word, and immediately said “nope” regardless of the fact the word it found was part of a completely different word. I’m a tad irritated considering I was typing that post for a couple hours only to have it rejected because of a flaw in the site’s curse identification system, so hopefully someone could possibly fix this, because I kind of need the word “Salvage” in the title of what I was going to post.

“Salvage”, which you can probably find the word yourself.

but the same happend to me, when I tried to put Assassin in the tittle, and I dont know if not allowing you fixes anything, since when you try to post it a message appears with a lot of bad words

yeah this has been happening to me a lot recently,it’s really annoying

@Ghosty
I just came back after being gone for a good while, so this problem is a first for me, though it is immensely annoying. I’m not experienced with making websites, or coding at all, but I know there is definitely a way to prevent what ever algorithm this site uses from censoring words just because it picked them apart like a lawyer looking for a loophole.

let me look that up on the translator,

no wait, I was stupid, now I know what you mean, how was I so blind?
well I mean, I didnt know just a three letters of the word were that bad, I think the filter for bad words is just way to much, it should detect when the word isnt used the way it think it is, dont know if I explained myself, I am falling asleep so… excuse me stupidity

Well by that logic, they should be censoring “assume”. I’m honestly not sure why this would happen. Perhaps you should post the entire title. The problem may not be in the word you think, and it would make it a bit easier to help.

Got hit with this as well the other day when trying to fix a title.

It’s…rather contradictory. “You can’t post this title because it has a swear word embedded in a completely different word, but here we’ll show you the page of several hundred alternative swear words for you!”

@Asriel
You weren’t stupid, it’s an oversight, I was more worried you were someone younger when you said you didn’t know what it meant, and that is a journey I would not want to send someone young on.

As for the censored word, it’s sort of a slang implication of the word, which most things get moronic shortenings because of “slang”, and this site’s poor algorithm is definitely making everyone else suffer because of that, among other letter sequences used in a similar, if not the same order as many other swears within words that need them.

@MaximusPrime
The only possible word is “Salvage”, though I’ll type it out.

Which now spoils my post, all of three people that care about that will be very upset, now.

@Ekorak
Yeah, not the most sound idea there, either, now that I think about it. Good point to bring up, really.

but here we’ll show you the page of several hundred alternative swear words for you!

Yeah, if the title has a swear, or something it perceives as one, it’ll show you a WHOLE LIST of every swear it censors. As in, every single one, filled with a variety of swears in differently typed ways.

try editing a title that has a swear in it.

like, say, try and edit this topic , by adding the word “assume”

Well, it’s worth a shot, but assuming it does work, I find it annoying you have to cheat a dang broken system just to have a title that has the words you want in it after it’s been posted.

Yeah, if the title has a swear, or something it perceives as one, it’ll show you a WHOLE LIST of every swear it censors. As in, every single one, filled with a variety of swears in differently typed ways.

Why. Why would anyone think that’s a good idea. 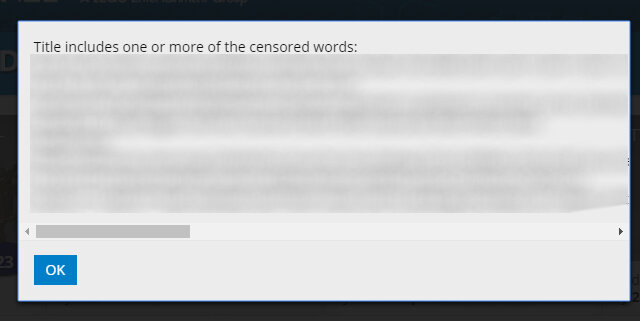 there are a lot of words here, worse than anything you have ever seen before

I put (Test: Assume) at the end of the title, and then suddenly there was a curse word that it wouldn’t allow in the title. This system is 7 kinds of broken on a 12 page essay.

the thing I dont understand is that you can write Assassin on a post, but then if you put in a tittle suddenly it’s a bad word, I just dont get it

Alright. So we’ve confirmed the fact that the topic title censoring system is broken. Now here’s another question. What good does giving a massive list of swear words do? Also, wouldn’t the censoring system for topic titles and posts be the same? Because if they where, this wouldn’t be an issue. I don’t see the point in having two different algorithms.