“A creature of great power and anger had been discovered by a loyal scientist of the Brotherhood of Makuta. I do not know what had happened to the brother of mine that went on the expedition, but he did not return back whole. His sight was gone, his sanity shattered like a flawed kanohi mask, and his strive for innovation had been replaced by cruelty unlike any that I had witnessed!“

“The Brotherhood’s Scientist brought agony to the island of Destral, turning the Makuta race into a cult of worshipers of a lesser spirit, and killing anyone who stood in his way. He listened to no reason or plea, and when the brotherhood’s greatest warriors resorted to force, his anger came crashing down like myriads of head-crushing thoughts, destroying my home and slaughtering my people.“

“Mutran, my dear brother, brought great madness upon Destral, and I know he’s not going to stop there. His darkness will spread into the core of the universe, your home, little ones. Which is why my only choice was to escape. I had abandoned my brothers and sisters to die in hopeless battle in order to protect the universe. There are others of my kind still alive and unconverted, but they are few and I have failed to reach out to them, meaning we’re on our own.“

“Which is why I have gathered you here. Matoran of light, you are destined to become the heroes that shall stop the plague that enveloped my brother and is spreading throughout the Matoran Universe, and I, Leutenant Teridax, will be the shadow to guide your way to the brightest future imaginable!“ 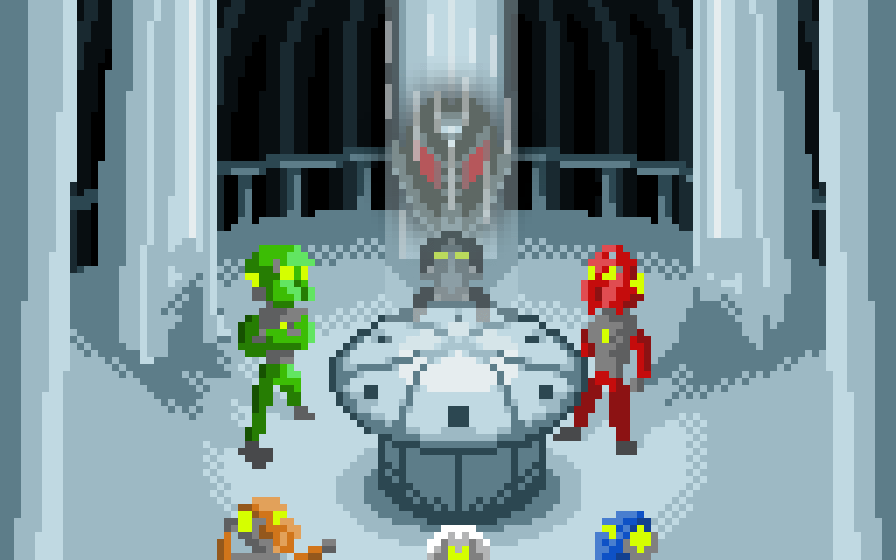 Some time ago, I drew [Mutran going studs over joints because he encountered Tren Krom] (Mutran, the Tren Krom's Hierophant) at a bit of an unfortunate time. Then, I myself went studs over joints and drew [Solek as a Toa of Light] (Toa Solek (Swolek))

Now I decided to have lieutenant Teridax, who miraculously escaped war-torn Destral, transform six of the matoran, we otherwise know and (don’t) love as Kardatoran from 2008, into a team of toa of Light. Can Makuta do that? Dunno, but let’s imagine that Teridax that fled from maddened Mutran is different enough to be able to do that.

-Very interesting story concept
-Nice pixel shading
What are their kanohi supposed to be?

I have this little theory that when Artakha designed the Adaptive Kanohi Nuva, he just modified noble versions of existing noble Kanohi, hence the reason for uncanny resemblance between adaptive masks of Toa Phantoka and Kardatoran. If you applied that same logic to the rest of the Toa Nuva’s masks, it’d be possible that noble Hau, Kaukau and Pakari would closely resemble Hau Kaukau and Pakari mistika.

As for why those exact masks, they’re the canon ones for Av-matoran Kirop, Gavla and Radiak