Metru builds definately won’t be enforced for these characters. Actually I think it is much more possible there will be a rule preventing it.

I am not saying it should be there. All I mean if one of those were to happen, it would be the latter.
Do not misread please.

I don’t see why the latter would happen though. Like, ever.

This is comparing apples and oranges and both will never happen. End of story.

Everyone’s talking about characters but I wouldn’t mind contents for other things such as the Staff of Artakha or art contests for other islands.

I’m mixed on characters with alternate forms, such as Turaga Jovan, Toa Dume, etc. It’s something the fandom has always wondered about, but then again, these alternate forms aren’t really important to the story, except maybe the Barraki.

I wish we could see more pictures of that fan-made Brutaka, so we could see what it looks like from all angles.

got you covered fam

Everyone’s talking about characters but I wouldn’t mind contents for other things such as the Staff of Artakha or art contests for other islands.

Honestly, I’d rather have contests for various creatures and artifacts than certain characters. The Staff of Artakha would be a good start, and I wish I thought of that earlier. I can see the Bota Magnan Vorox’s blasters getting canonized if there’s a contest for Kabrua, although I’ve almost always viewed them as these since they’re based on the same tech as the force blasters but not the same. 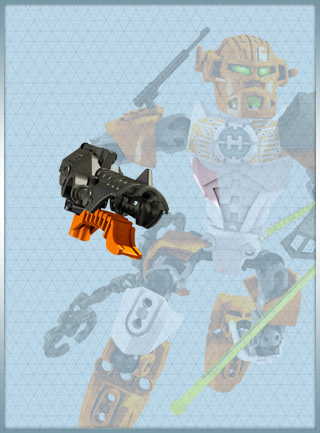 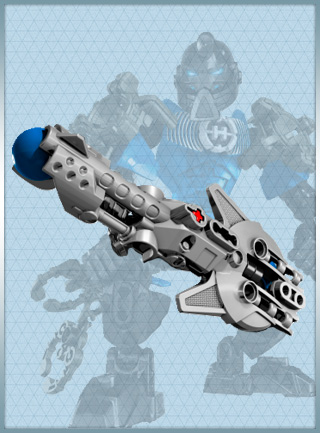 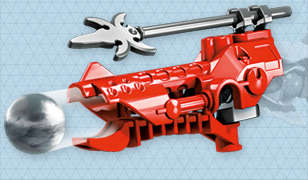 The Shadowed One, Ancient, Conjurer, and Tyrant are all the same species, with no mutations or anything (Besides Conjurer losing his tail to The Shadowed One).

I always like to headcanon that the differences in head shape are because some of them wear Doom Viper skulls as helmets. Reasoning:

I don’t think they’re too different to class as a single species. They’re no more diverse than, say, Toa are.

I say we avoid this problem by giving them all completely outlandish metallic colours.

art contests for other islands.

I’d actually be on board with this.

I’m mixed on characters with alternate forms, such as Turaga Jovan, Toa Dume, etc. It’s something the fandom has always wondered about, but then again, these alternate forms aren’t really important to the story, except maybe the Barraki.

I’m kind of against this. By the metric of “did they appear in the story” - many didn’t. We know they must of had other forms, but the whole point of giving visual depictions to characters is to better visualise them in-context. WHen all we have from them is word-of-mouth tales for other characters, it doesn’t make sense that we should get those designs (at least, the way I see it).

I can see the Bota Magnan Vorox’s blasters getting canonized if there’s a contest for Kabrua, although I’ve almost always viewed them as these since they’re based on the same tech as the force blasters but not the same.

There’s these things (basically Thornax launchers, but still) in the Core War panel for Mata-Nui sage that I always imagined being Force Blasters.

Regarding Tren Krom, I thought the point of his appearance was that he was too horrifying to look without going insane, which is an eldritch quality that makes it fun to interpretate. Giving an actual appearance would sort of water him down because the moc won’t actually make us insane. Unless we’re going for a censored version of him.

because the moc won’t actually make us insane

Then I probably shouldn’t post my custom Tren Krom, since I went insane while building him

Matoran went insane after looking at Tren Krom because he is organical. They get sick when somebody eats using mouth you know. Also, when Brutaka and others saw him they haven’t went insane, so he is not that horrifying. But such a MOC should be something with eldritch/another-word-with-same-meaning-but-not-referimg-to-Kthulhu motives.

Please. I unironically want this.

And then maybe orange for Gakki, green for Kualus, and that metallic blue for Bomonga. But purple/pink Pouks is the important part.

The key is that the metallic colour cannot be a normal colour for that element. Like how gold is not a usual colour for Toa of Air.

Please. I unironically want this.

Y’know, I actually won’t argue. I’d kind of like it too.

For team metallic combos, I’d be happy to see:

I do think we’ll need to be a bit more careful with these two, because white/black are going to be easily affected by whatever other colour you pick and mixing the wrong thing could mislead the element more than some of the others. So that’s a good point.

Tbh that’s another argument for pink Pouks - he would look a bit like a walking geode.

(oh no what have I done

We can probably get away with anything on Gaaki that doesn’t make her look like a toa of Psonics/Lightning.

Whereas black has often been used as a filler colour, such as on the Toa Mata.

Still though, Bomonga will be primarily black. I, personally, couldn’t see that as a Toa of Water. Though the concern is there.

The thing with earth is that so many bright colours are already associated with it: Purple, orange, and tan are already Earth colours. Even green is already a fairly “Earthy” colour, so blue is really all that’s left.

EDIT: I’m stupid, red is a colour. Between Kualus and Bomonga, we still have blue, green, and red. Kulaus can’t have blue, or else he would just look like a standard Toa of Ice, and Bomonga should avoid green, since Toa of Earth already have green eyes. So maybe green for Kualus and red for Bomonga?

SECOND EDIT: Is red too similar to pink/purple?

There is not a single set ever released with white as a filler colour. (I think? Any corrections?)

Well, Hahli Inika used white as her secondary color, but I’m not sure if that counts.

Yeah, that was intended to be a secondary colour.

(Which is stupid in its own right, but that’s a discussion for another time.)

I look at it this way: If you were to draw the character, freeing you from the limitations of physical part colours, would you include the colour?

Drawing Hahli Inika, the white would be included.

And, honestly, I’m not even sure anymore that black is a filler colour on the Toa Mata. I think it was an intentional tertiary colour.

The problem with rainbow-metal rmor is that it needed to be paimted. Though there is no much gold in Bionicle G1 either.

I think that canonization contest for Morbuzakh and Karzahni (plant) would be cool. But, since they sre, well, plants, it would be quite hard (and interesting) to create them. So it might be just Art contests. In that case, Morbuzakh already has an art, and only Karzahni needs one.

Still though, Bomonga will be primarily black

I’d argue that the Hagah’s armour color is about as prominent as their “main” color, especially if they are using the metrutoran torso armour piece.

Assuming that Bomonga will follow the soft rules established by Iruini and Norik, he would look something like this: 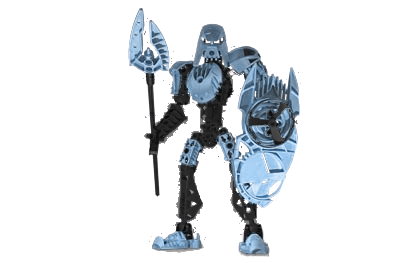 I think that it’s too much blue

Bomonga should avoid green, since Toa of Earth already have green eyes.

Matau had red eyes, whereas Iruini had orange eyes, so I don’t think that the Toa Hagah need to have matching eye colors with the Toa Metru. I personally don’t like how so many ice characters are given light blue eyes, while everyone else get’s unique contrasting eye colors.

btw, this is getting a little off-topic. Maybe we should discuss further on the g1 canon contest discussion topic?