This year, 2021, is the 20th anniversary of the launch of Bionicle G1. A lot of Bionicle fans (including myself) are rejoicing at this anniversary. I wasn’t even old enough to speak in 2001, so obviously I never got any of the OG Toa Mata sets. I’m contemplating going on eBay at some point this year and getting all six of them…if my budget allows it.

Some people on these boards have said they want Lego to put out some kind of Bionicle product this year to celebrate. Factually speaking, I’m not sure that’ll actually happen. We saw how Bionicle was considered to be in The Lego Movie 2, only to be cut. And there was the massive letdown that was the Lego Ideas results last June. Both of those things make me doubt that Lego will release any kind of commemorative set. Sure, there’s Christian Faber’s hints that he’ll release something, but even then, nobody from Lego itself is making any promises.

But, just for fun, let’s assume that Lego does remember Bionicle’s anniversary and is willing to put out an anniversary set. If that could happen, what would you like to see? Would you like to see rereleases of older sets, or some new build that pays homage to the days of old? As I have hinted above, I never got my hands on any of the sets from the early years, so I would be pleased if Lego rereleased them and I had a chance. But I’d also like some kind of new commemorative set. Maybe it could be a brick-built Tahu figure, or a mosaic set where you could build the Toa Mata’s masks. Or it could be in the vein of Sokoda’s Ideas project, where it had dioramas of key events in the Bionicle storyline.

What about you guys? What would you do for a 20th anniversary set(s)? Don’t worry about facts that might prevent your ideas from becoming a reality-this is all wishful thinking.

This is kind of similar to this topic

I’m working on one, I’ve put months of work into it and it’s very close to being put on Lego ideas. I have just had some set backs…maybe It will be done today, I’m not sure.

Here’s two things that I think would be cool if LEGO did for Bionicle’s anniversary.

EDIT: I made a rough concept of what a great spirit robot box would look like. The actual model would probably be more system based in an actual set. 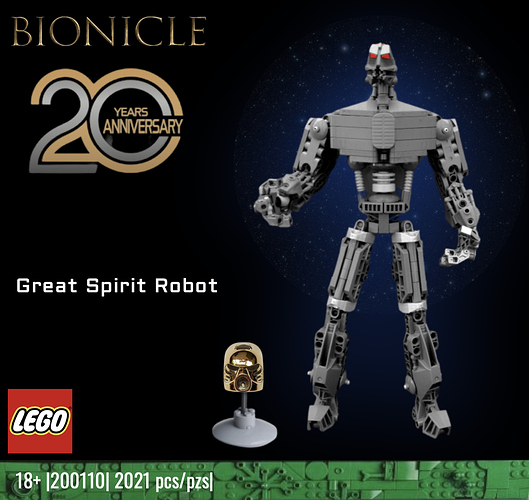 If there were no limitations at all, I would have a conclusion to the serials UCS, ultra-detailed versions of the Toa Mata.

But the truth is, if we’re going to get a “UCS” set of any kind, there would only be one. Any kind of multi-set “line” would probably be aimed at kids. For Lego to put the effort into a “adult/collector’s” anniversary, they would dump everything into one set. (Or BrickHeadz)

And that’s why I think the Great Spirit Robot is such a great candidate. It’s a single model, and a massive, iconic part of the Bionicle story that never got any kind of set depiction. Additionally, it wouldn’t require any crazy new molds; it could be done entirely with System. Just look at that Mata Nui bust that I posted here a few days ago:

This is pretty cool. Lego Designer Niek Van Slagmaat released instructions for this model of Mata Nui’s head. It may not be official, but it’s still awesome.

If you showed me a picture of that without context, I would it assume it was an official 20th Anniversary set, and I would be happy.

(Plus, if Lego is worried about sales, Giant Robot With Lasers has mass appeal outside of the Bionicle community.)

I can tick the “giant system Great Spirit robot” for you

let’s have it be a rerelease of Solek

If they can’t risk to create a large UCS-style set, I would like for LEGO to do a promotion of sorts where we could get a re-issue of the Golden Ignika, so more casual people would be able to get it. I know this probably won’t realistically happen since the mold is probably long gone, but I think that would be an anniversary thing that would satify most people.

I feel if anything, we maybe would get the Mata re-released in a Stars like set similar to Tahu

) a range similar to the minifigures range but like the original Bionicle blind bags for masks, except they would be masks we had but in colours we never got

Some kind of articulated brick built figure would be my goto, (best case scenario would be remakes of all of the toa mata, but they would most likely just do tahu if they were to go that route.) but I’m open to other ideas.

Hey, CCBS is already 10 years old too! And Ninjago also! Where will be the party?

As for anniversary set, I really liked Sokoda’s one, but LEGO obviously did not. Also some buildable mask (Ignika, Hau) or GSR would be nice ideas. Rerelasing old set is weird, because if rereleasing one, the rerelease them all. Also, something like and advent calendar in Star Wars would be interesting. 5 small items per year, 45 items total, for example (and there could be Masks!). Also they could’ve released Mask of Ultimate Power and Mask of Time from G2. So those were some random thoughts.

Honestly, I would really like a JTO Makuta set with all the parts to finish its component sets (so I can finish my Ikir and UtD) and the Mask of Ultimate Power, similar to Kardas, Voporak, or Ultimate Dume.

I’ve been able to make a decent recreation using only Ikir and UtD, alongside some parts from other sets I already own, and I would like to have the real thing, 100% accurate, in my hands one day.

I would want a brick built map of mata nui, one that could be hung on walls, as well as minifigure versions of the toa mata.

What about Bionicle Minifig Blind Bags? Exclusive mini-figures of the most iconic characters from the theme, the Toa Mata, Makuta, Mata Nui, Krakua, etc. Sounds a bit more plausible for LEGO to release those in honor of Bionicle’s 20th Anniversary. And a throwback to Bionicle’s original roots with the Kanohi and Krana blind bags.

while I would love minifig toa, I am personally wishing for a CCBS stars-ish set (or sets?) of the toa mata with new takes on their old masks and toa tools.

And that’s why I think the Great Spirit Robot is such a great candidate. It’s a single model, and a massive, iconic part of the Bionicle story that never got any kind of set depiction. Additionally, it wouldn’t require any crazy new molds; it could be done entirely with System. Just look at that Mata Nui bust that I posted here a few days ago

I imagine it would take some explaining on Lego’s part, so that the casual consumer would know what the GSR really is. But yeah, it could be done with Lego’s current arsenal of parts.

let’s have it be a rerelease of Solek

Ah, yes. The one and only Solek. The single, most beloved set in the entire Bionicle community. The set that will sell out faster than the 501st battle pack should Lego give it a rerelease.

If they can’t risk to create a large UCS-style set, I would like for LEGO to do a promotion of sorts where we could get a re-issue of the Golden Ignika, so more casual people would be able to get it. I know this probably won’t realistically happen since the mold is probably long gone, but I think that would be an anniversary thing that would satify most people.

And if it were in solid gold, then I imagine it would go for hefty amounts on eBay.

Some kind of articulated brick built figure would be my goto

Which reminds me of this topic you made a while back…

So recently, LEGO released images of the new wave of monkie kid sets, among them was “The Flaming Foundry” which includes this small brick built figure of the demon bull king [Screenshot at 2020-07-07 18-23-52] We’ve seen LEGO make brick built characters like this many times before (the redstone abomination from minecraft dungeons for example), but this one is very close to what I, and many others, would want from a system reboot of bionicle. It makes me wonder if LEGO is actively experimenting with the concept of system constraction, even if a bionicle reboot isn’t the intended culmination of those efforts, (which it most likely isn’t) it’s still very interesting to see.

I just want there to be some kind of actual product that I can buy.

As does almost anybody in the Bionicle community…

Wow. I can’t believe I forgot about that.

What about Bionicle Minifig Blind Bags? Exclusive mini-figures of the most iconic characters from the theme, the Toa Mata, Makuta, Mata Nui, Krakua, etc.

I’ve had that exact idea in the past. Although, redesigning Bionicle figures in minifigure form would be a pretty risky gamble. Mission Statement:20 years ago Bionicle began, and 10 years ago it ended. Over those 10 years a story full of memorable characters and deep lore was ...

Which reminds me of this topic you made a while back…

it does definitely seem like lego is trying to meet us constraction fans halfway to some degree recently, with stuff like the minecraft bigfigs, the demon bull king (the original large version and the smaller one), the monkey king warrior mech, and those new superhero mechs that can almost function as standalone figures.

It doesn’t seem out of the question that lego would go a similar route if they were to make a celebratory bionicle set.

also I personally think that a character like tahu would sell better than the great spirit robot because tahu is far more likely to be recognized by the average joe who never really got into the lore and just “had the red one” as a kid.

it would appeal to both the core fans and the nostalgic casuals.

sure, a great spirit robot set would be cool, but a brick built tahu would be a much more realistic thing to expect imo. (if we were to get a set at all that is)