@Cordax suggested a way to keep 08 sockets from breaking while using them in MOCs. I’ve recently disassembled my Rockoh T3, which was kept built for over a year. I put friction adders on Pohatu’s long sockets, and used them in a MOC. None of them have had any damage (at least not that I can see). Luckily I haven’t had any trouble with his black Y-joints.

Ah yes this was 100% your idea and was definitely not suggested by me.

I’ve had some Balljoints broken clean off from the limb they were attached to. Mostly Vahki legs, but also others.

That’s not the balljoint breaking, though.

The ball doesn’t have to break in half in order to call the joint broken, just as a knife that has the grip fall apart ist still a broken knife even if the blade is still sharp.

Look, I don’t know what you’re trying to say by making this distinction that isn’t factual nor useful to the conversation.

tl;dr
Yes it literally is what are you talking about

If you want to argue semantics, I made clear that I was talking about the point of attachment between the Ball and the rest of the piece.

Yes, but you made that point to counter my point about the ball, not the attachment.

idk what to tell you if you’re going to get that defensive. I was referring to the actual ball. I don’t think I’ve ever heard of one of those standalone balljoints breaking, for example.

also what is with this board and the word “semantics”?

balljoints are basically indestructible tho.

Please, I’ll do anything! Just- just don’t kill me!

Any design ideas / tips for a larger head design? Ive been working on a MOC for a while now, but im stuck on the head design. What I have doesnt feel quite right for the build. 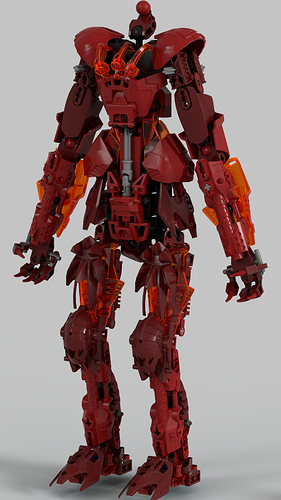 (currently designing in stud.io, and im still rendering the pictures of the main body, so I only have this one image, and none of my current head yet.)

Edit: just to stay ahead of the funny guys, that ball joint connection on top is his neck, not his head.

just to stay ahead of the funny guys

I’d suggest looking around some MOCs with custom head on Flickr for inspiration. Not sure about a specific head design, from what I can tell custom heads are usually pretty specialized to their MOC.