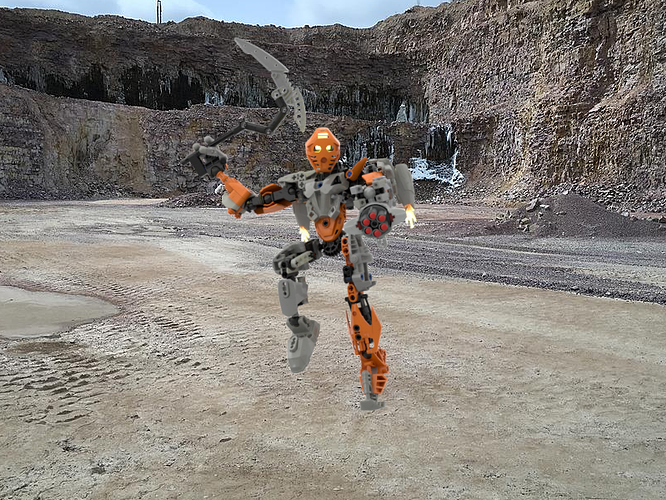 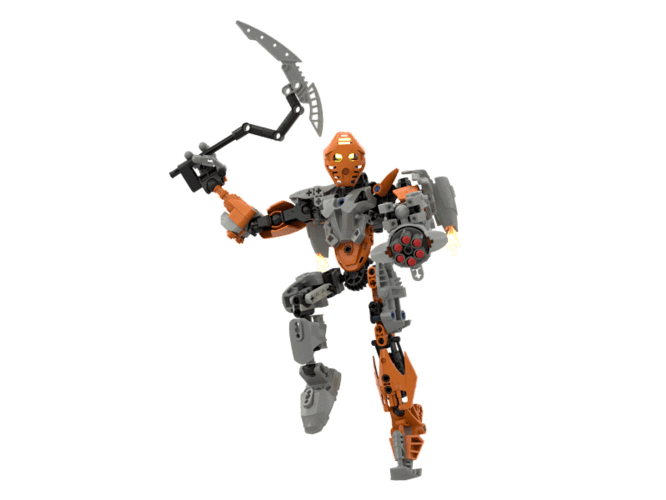 Vectus, Toa of Iron (rendered jumping)800×600 150 KB
Early Life
Hailing from the island of Nynrah, Vectus was a member of the Fe-Matoran group known as the Nynrah Ghosts. The Ghosts were renowned for forging weapons and armor rivaling that of the Xian foundries. The Ghosts were working on a brand new project yet they needed an experienced test subject, preferably a fellow Nynrah Ghost. Vectus volunteered for this project as he was the one who created it. The Nynrah Ghosts backed up Vectus’s AI into an external drive, removed and preserved his organs, submerged his Matoran body into molten protodermis, and began to hack, slash, hammer, and drill his molten body. The project succeeded, transforming his Matoran body into that of a Toa. Vectus’s organs were replaced with the preserved organs of a fallen Toa. The only thing is while he had the body of a Toa, he lacked the powers. To remedy this unfortunate outcome the Nynrah ghosts crafted neural magnetic manipulators, devices capable of controlling metal with but a thought, and implanted them into his head. They also made an alloy liquefier, another device that controlled metal this time converting it into a liquid and being able to solidify it again, and implanted this into his body as well. The outcome gave him powers nearly identical to that of a Toa of Iron. He was armed with an electromagnetic scythe and a surface calibrated cordak blaster that fired electromagnetic torpedoes. When the Makuta found out they evolved and came to the Ghosts for new armor the Fe-Matoran were not pleased with their hostility and deployed their new weapon to fight the Makuta. Vectus killed an unnamed Makuta by shattering its armor with his cordak blaster (the electromagnetic shockwave left behind vaporized the Makuta’s antidermis) Unfortunately for Vectus the other Makuta were not pleased with this and wounded him badly in battle.

Rebirth
After the Brotherhood left the Ghosts inspected their injured friend. They were conflicted on casting him out or not due to the fact that he was one of their closest friends. They resolved to implant life support into him while he was sleeping and sending his crippled body washing up on the shores of Stelt. The Steltians saw potential in Vectus and modified his broken body, building his cordak blaster into his new mechanical left arm. They also replaced his broken mask with a new Pakari and gave him a mechanical right leg. He fought in numerous arena battles for the Steltians until he was discovered by a misfit team of Toa after Spherus Magna’s reformation. He joined their band of outcasts as the third member of their team, swearing to get revenge on the Brotherhood as one of the last Toa of Iron.

I will make more renders eventually to add on. I didn’t have much time so this is all I got.

Very nice, I really enjoyed that backstory, and especially love how you were able to disguise the fact that your moc has a Inika build.

I love the idea of an artificial toa. The build also looks really good and the mask and weapons and work. Overall this is a pretty solid moc.

Thank you! I was most proud of covering up the Inika build and making it look like a custom build. This guy is 100% buildable so I will have to build him irl.