Actually, this is the 10th version of Voltstorm (still not quite fond of the name, but I named him that several years ago). 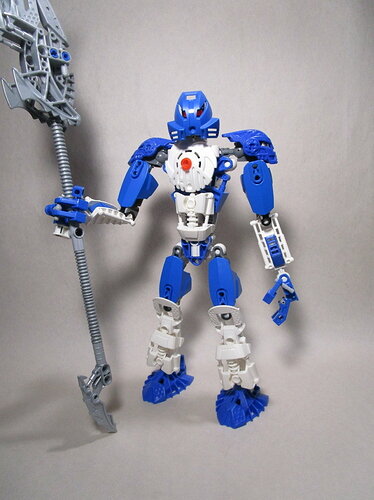 Name: Voltstorm
Species: Vo-Matoran (created by the Makuta of Vaha Nui)
Gender: Male
Element: Lightning
Mask: Kanohi Kakama, Great Mask of Speed
Home Island: Vaha Nui
Weapon: Scepter of Elemental Energy (more on that later…)
Affiliation: Toa Vaha (leader)
Backstory: After the Vaha Nui Civil War, and event which decimated the Matoran population of the island, the Makuta of Vaha Nui did something almost no other Makuta has ever done: he created new Matoran, thousands of them, to repopulate the island. Voltstorm was one of those Matoran, though it remains a mystery as to why the Makuta made him a male Vo-Matoran, as most other Vo-Matoran are female. Voltstorm’s fellow Matoran (except a Vo-Matoran named Volah) thought that a male Vo-Matoran might be a sign of a curse on their village, causing him to live on the outskirts of Vo-Koro. At some point, Voltstorm encountered a Ta-Matoran and a female Av-Matoran, both of which were on the run from the Dark Hunters’ constant siege on the island. A Toa of Iron, accompanied by a Fa-Matoran, a Bo-Matoran, and a Kra-Matoran, visited the three Matoran, informing them that the Turaga of the Vaha Nui requested their presence. The Toa and six Matoran traveled to the island’s capital, where they found the Turaga (a Le-Turaga, to be specific) and, upon meeting him, the Turaga gave the six Matoran Toa Stones, which transformed them into the Toa Vaha… 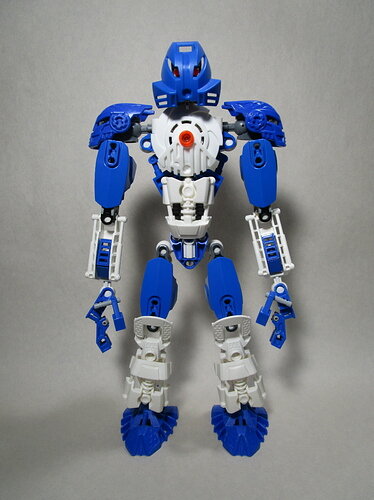 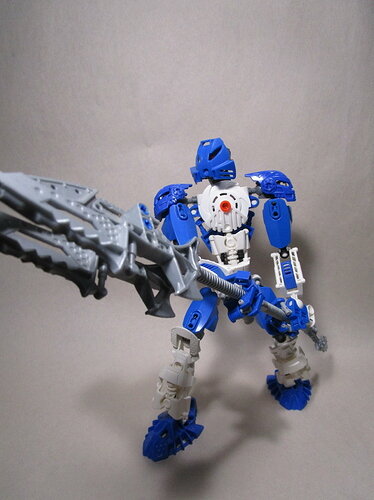 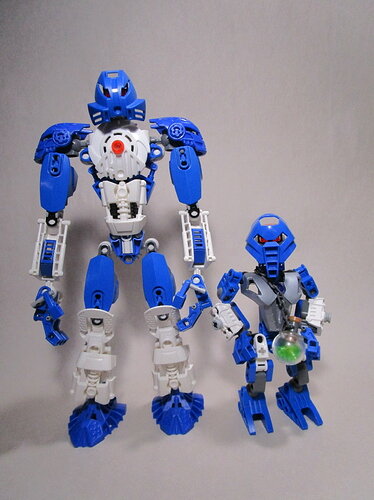 Notes: I may do a little work on Voltstorm’s backstory, since there are a few things I could still improve.

Thanks for viewing, everyone!

I love the color scheme, and the weapon is really cool!

@Wolf_Pack @Kardax @LegoDavid Thanks! This is only the second version of Voltstorm to have the proper color scheme for a Toa of Lightning (the first version was an accident, since I didn’t know what the proper colors were back then

The arms are a little long, maybe you can fix that with a redesign of the upper arm? I think the upper legs can be a little bit longer but you’d have to compare their size to the lower leg, I’m not quite sure how they compare if they’re the same size it’s okay.

I appreciate the filled in sockets on those mata feet in the torso. If you wanted to redesign the whole shoulder and arm assembly you can use those balls to connect the arms and use the free space in the top to attach the shoulder pads differently. Right now it has this kinda stiff “shoulders that feel too separated from the body” type look I’m not a fan of, but some people like that.

I like how the torso is put together as a whole, those armor plates at the front fit surprisingly well together.

Thank you! Yeah, the shoulders and upperarms are a couple things I wanted to fix. As for the legs, they’re the exact same length as the Toa Inika’s legs.

Then the legs are fine, if you make the upper legs longer they’ll just look weird, I couldn’t tell well.

Excellent job on this MOC! I like the many interesting uses of pieces from Mata feet in the torso, to Surge masks as the shoulders, to the capping on the legs with G2 torso plates. The colors are also very well balanced and intriguing to see together at various parts of the body. Also a neat Vo-Matoran build too, especially on the legs