As most of us know, the primary inhabitants of the Matoran Universe (by which I mean Matoran and Toa) all have certain assigned elements, and those elements have certain assigned primary, secondary, and sometimes even tertiary or quaternary colors. They are are follows, according to BS01:

Obviously the validity of all of these being able to be considered “elements” could be pretty easily brought into question, but it is what it is and that’s not what this topic is about. This topic is about colors.

Out of a lack of parts, and an unwillingness to compromise on my own lore, I would propose something slightly different:

Instead of staying strictly within the rules, play around.

I do not mean the obvious things that have already been done within the sets - yellow in fire Toa, Purple in Earth Toa, etc. That’s not what this is. This is taking an element and their color scheme, and going outside of the obvious, while remaining within what is recognizable.

An example would be a Toa of Psionics with a purple and gold color scheme, rather than Metru blue. For me, I’d still say this would remain recognizable as a Toa of Psionics. Or a Toa of Light with tan and gold, or white and tan.

Another thought process would be taking something that’s more inherently recognizable as an element, and using real-world aspects of that to change your MOC. Take water, for example - give a Toa of Water asymmetrical, multi-colored armor and greebling to represent coral. Or a Toa of air with heavier sand blue coloration.

For me, the implications of this are as much for making builds more compatible with my collection as they are for infusing different types of character into a MOC purely through its colors. Going back to my Psionics example, the minute a the color goes from blue to purple, the feel of the MOC goes from graceful to regal. Or the Light example, it changes the feel to a more experience, older character.

The other point I wanted to bring up was differentiation between armor and “skeleton”, and the color blocking that follows.

If I have a black MOC, and the torso and upper limbs have a consistent color, with the lower limbs being black, it gives the illusion of plate armor. If you stick to that formula, you can further give the impression of heavier or lighter armor. Reconciling our modernistic views of clothing with BIONICLE gets a bit sticky, but you don’t have to explicitly state it in your MOC, but rather just create the illusion to give a MOC more character.

Anyways, this is mostly just me ranting about random stuff and not really bringing up something to discuss, but I’d like to hear your own suggestions for alternate color schemes and/or color blocking styles.

I’ve done a few interesting ones:

A Toa of Earth who was entirely Dark grey and orange, no black. A Toa of Ice who is light grey and light blue, no white. A Ce-Matoran who is blue and keetorange rather than blue and gold.

I also had a water Toa with primarily blue, but her secondary color was red, in honor of a fallen fire Toa. I’ve considered a whole team like this, but so far I’ve just got the one.

I did some “out-of-the-box” color schemes for a couple of my characters, but that’s mostly because I usually come up with the MOC first and then try to fit it into the canon and assign elements. So basically I just wanted to make them look cool without trying to stick to any particular “canon” colorscheme This character, Nero, for example, is a Toa of Sonics, but I decided to go for red as the accent color to spice things up a little. Obviously I tried not to go overboard with the red, but I think him being mostly silver gets the message that he’s a Toa of Sonics accross pretty well (even though, now that I think about it, his red-to-silver ratio isn’t that far off from Tahu Mistika…

but that’s really saying more about the Mistika than anything :p) There’s also Fyrja, who’s a female Skakdi of Stone, but sports a purple colorscheme. Why? I don’t know to be honest, I just thought it’d look cool.

Overall I just like going for contrasting colors to make the characters pop and stand out more. One of the things I disliked in the original Bionicle was the fact that a lot of waves suffered from very dark and boring colors (Toa Metru, Hordika and Mistika being the worst offenders, thankfully G2 did much better in that regard), so it’s something I try to avoid while moccing: 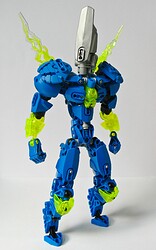 And honestly I wish people would do that more. But sometimes I feel like people feel “restricted” by the official story and just stick to the “canon” colors and color combinations. But in my opinion the canon colors are just a suggestion, not a strict rule that you should always stick to.

Hell, even the official sets strayed away from canon colors, Hahli (both in her Inika and Mahri forms) being one of the best examples. Tahu Uniter from 2016 also had little bits of azure as an accent color and I personally loved that a lot (though I might be in the minority here).

So yeah, as a moccist, I would just advise people to go crazy with the colors, choosing unorthodox color combinations doesn’t even contradict canon (Hahli, Tahu) and can really work wonders in a lot of cases.

I decided to make him a Toa of Plasma, since Keetorange is technically a shade of orange

I think this would be more obvious if you replaced the grey with white, though, since Toa of Plasma are supposed to be orange and white.

very dark and boring colors (Toa Metru, Hordika and Mistika being the worst offenders, thankfully G2 did much better in that regard), so it’s something I try to avoid while moccing

This crap would be easier with fewer canon elements. I mean, let’s say there’s only 9 elements, just as an example: the original 6 (minus Stone) plus Light, Lightning, and The Green. If you take a color wheel, as well as black and white, you can easily assign a single color to an element and say the only rule is that a character of that element must read as being primarily that color.
Red: Fire
Orange: Iron
Yellow: Light
Green: Air
Cyan: The Green (confusingly)
Blue: Water
Purple: Lightning
White: Ice
Black: Earth

Each color would look pretty different from one another and still have room for variation in a specific color scheme. You don’t have to worry about specific color combos looking too much like the wrong element, and there’s room for a neutral or metallic color to take center stage where needed. Hell, there’s still vacant spots for primarily grey, magenta, or lime Toa if you want more elements. But 15 elements? That means that either elements must be distinguished by oddly specific color schemes, which we have now, or some elements have to be super close on the color wheel, to the point where they’re hard to tell apart.

As such, I believe that colors, much like elemental genders, ought to be disregarded when MOCing and writing. The canon machine’s broke, so don’t lean on it like it must be abided or else what you’ve created is trash.

This. So much this.

That is true, and I’m not saying you shouldn’t use darker colors at all. In fact, in many cases you should, because as you said, darker colors can give a whole new different feel to the character. But in my opinion even a darker color scheme could use a little bit of brighter accent colors - or any accent colors at all. Toa Metru just had a combo of dark primary color + dark gray as a secondary color, resulting in a very boring, bland look. There are many revamps that replace the gray sockets with other colors, i.e. the sand varations of the primary ones, and that change alone fixes a lot of issues I have with their vanilla color schemes, without losing their “darker” tone.

A Ce-Matoran who is blue and keetorange rather than blue and gold.

I honestly just default to this; gold is too rare in my collection.

But in my opinion the canon colors are just a suggestion, not a strict rule that you should always stick to.

Strongly agree with both of these, though. A lot of the charm and interest in Bionicle comes from the creativity, so you get a lot more out of it if you treat the “rules” a bit more loosely. They’re more like guidelines, anyways.

Hey, original color schemes are cool.
But if thinkink of something weird and strange I can give even a couple of set examples - Pridak, Carapar, Mata Nui, Roporak, Pohatu Fantoka.
I always find it cool if rare colours are used, such as Sand Green, Very Light Bluish Grey, Turqoise, Tan, Yellow (not Keetorange). Not that they are reallly outstanding, but I think they actually improve color palettes for elements, while keeping consistency.
Now just my weird colors ideas: yellow for lightning (Surge, actually), pink for water (coral), Transculent colors for earth (crystals/diamonds), Platinum for Iron, Light Blue for Plasma (I don’t know why).

Only one of those is a Toa, and he matches his Element’s “official” colour scheme.

Are you referring to the Platinum Avohkii?

no idea how green and white equals ‘vacuum’ in my head

Prolly because Vacuum is air on its day off so checks out.

Is that for a certain moc?

This. So much this.

I personally think it depends on what you’re going for.
I personally like the elemental genders, and have adhered to them when building plenty of the MOCs that I’ve made. Also, though, there were times when I wanted to give a character a color scheme that didn’t fit within those of the canon MU elements, but I did so anyway, and was satisfied with the way the MOCs looked.

for me the canon comes first. if something doesn’t fit with canon in my mocs, i fix it so that it does. got a white female toa? slap some blue on there, call it electricity.

Or, alternatively, having to make every single blue character of yours female.