Hello there, I present you my submission for the Toa Hagah art contest. 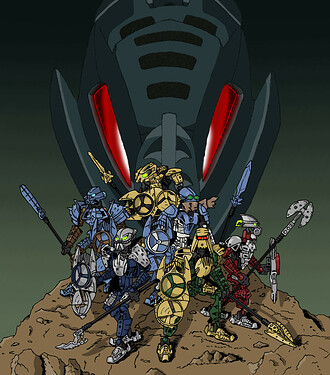 He wanted to show them in some kind of battle formation, ready to go. The Kraahkan in the background represents Teridax’s presence and threat on the Toa, either deceiving them with lies or deceiving them with mind control (he is not actually physically there, I am not implying that at some point Makuta takes the form of a giant Kraahkan).

MOC changes
The first thing I wanted for the team was an equal armor color ratio, and since the disput for that was beetween gunmetal Pouks and metal blue Kualus, I end up chocing metal blue for both. This color works surprisingly well with Pouks, and also give a more precious metal look than gunmetal (although I’m not sure what precious metal).

Gaaki
Originally I wasn’t gonna change Gaaki’mask, but since the MOC author express his desire for it to be changed, I did. I chose an Elda since it also have an aquatic look and it don’t introduce a new mask with unkwonw power. Also she wear it in honor of the Toa in Jovan’s team when they were for the Ignika (maybe that Toa was the one that sacrife himself). The mask is basically the same than Hahli one, but it fits a Metru head.
I also changed the spear tip, since the original one is a little expensive piece. The new tip is more accessible piece and it looks like a harpoon.

Pouks
Pouks was the one that recived more changes, not because I didn’t like his original design, but he was just a victim of the circumstances. I already explained the color choice. Since the original tip don’t exist en metal blue, I opted to change it to something more in line with BIONICLE (something with pin holes).
I also changed the Champion Kakama for a Noble Kakama since both looks very similar, and the latter avoid the problem of introducing new unkwonw masks. 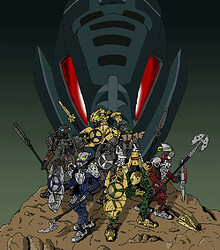 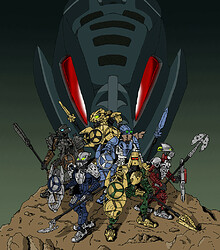 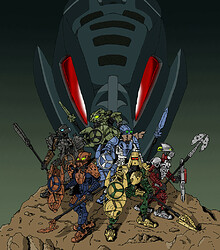 I hope you like them. If you like one of the concept that I changed (mask choice, spear tip, color) feel free to used them in your own art entry. I like my choices, so I would like to see them getting through the contest.

I‘m not a fan of a 2/2/2 split but anyway:
That’s the wrong bomonga. You drew Perp‘s bomonga and not the winning one. Well except for the mask. (I think atleast. The shoulder and neck armor thing look more like Perp‘s)
But the Art looks good

The lineart here is great! Is there any 3d printed mask you’d prefer for the elda?

This is one great piece of art. Can’t say I’m a -huge- fan of the Elda-esque mask for Gaaki, But the 2/2/2 with metallic blue is an absolute win for me.

I agree with @Winger; I really like your choice of recolors (I personally want Kualus to stay metallic blue, and I’d say that Pouks is the best one to switch to that color to maintain a balance).

and 2 have been worn by Hahli (this last point was a coincidence, I swore)

Part out of curiosity, and partially because I completely missed if this had been discussed before, do changes to eye color constitute a significant, and thereby prohibited, modification to the design?

Right now, we’re leaning yes, it would be prohibited. The previous winning entries retained the colors of the winning MOCs, and we’re opting for precedence for the time being.

Good catch. I hope this would be allowed under that, even though I don’t like the 2/2/2 split. (#CopperGaaki)

Jesus Christ this is what I’m up against!??
(I love your style so much, best of luck in the contest:))

Neat drawing. Too bad it has blouks, so no vote for this from me

Neat drawing. Really glad it has blouks, so definitely getting a vote from me

No, the shoulder armour is different. Double used Metru shoulder pads. This uses the Metru thigh+barraki armour, similar to Perp’s. It also uses the same neck armour as Perp’s, again unlike Double’s entry, which used Metru thigh armour for the neck.

Lovely art! Love the Kraahkan in the background. I’m personally not for the 2/2/2 split (copper Gaaki/metal green Bomonga are my beloved) but I really like this. Good luck in the contest!

Got my vote solely because it keeps bomonga’s limbs ambiguous. Good call.

This is a really outstanding drawing, the details are really well done. What you have achieved here is very impressive. The kraahkan as background it’s a nice addition. I have seen you made a few changes, which is fine for consistency, especially, the metallic colors since I aprove the 2/2/2 ratio (I originally wanted gunmetal to be the third, but metallic blue works fine too).

If I have to choose which is the best change, that would be Bomonga’s shoulder armor. I don’t know if it’s allowed, but in case it is, we’ll have different shoulder armors for each Hagah avoiding the repetition of the metru shoulder and the nuva one that clearly doesn’t cover the shoulder properly in metru builds. Amazing idea! Hopefully, more entries will do the same if it’s allowed.

From another point of view, the usage of the Elda in a toa of water may be a bit repetitive, but it still works.
What I truly believe doesn’t fit here are the spear changes. Gaaki is using a piece that has already been too overused, the mahri blade. Since 2007, we have had it in matoran, toa size sets, titans, vehicles and even playsets. Her original piece was too big compared to the other spears, so looking for a smaller piece was a good idea, however, that one in particular is not the best choice.
About Pouks, he’s using a piece that is already Kopaka’s characteristic weapon. It’s true that Norik uses Gali’s aqua axes, but if we can avoid repetition, I believe we should and with even more reason if it’s an ice piece in a toa of stone. He’s previous weapon already worked fine despite being a Hero Factory piece.

And also one other thing… thank you for not showing Bomonga’s limbs.

I see the debate about what Bomonga I drew and I understand the confusión, since Double’s and Perp’s have a similar build. But I did drew Double’s Bomonga, I used that model to have that pose.
I hide the limbs with the shield and Kualus to left them ambiguous. But those torse limbs are there, just not showing.
The spear and the mask are the same (although the last one I try to merge the original design with the Mahri one, to again keep it more open to interpretation, but I may have gone too aquatic).
The neck armor is the same, metru knee cover, I just didn’t drew it that well at that point and didn’t think it requiered a correction. Same with the shoulders, I didn’t plan change them, but the draw is more open to interpretation (although I don’t really think that looks like a Barraki armor)
Sorry for the bad spealling, I’m not in a computer to check it.

Looks like Metru shoulder armour to me. I think the art style just makes it ambiguous.

Is there any 3d printed mask you’d prefer for the elda?

I haven’t seen any 3d piece that looks just like the organic one (without that mouth). One of the reasons I chose that mask was to have a more “official” inorganic Inika masks. For my original MOC entry I used Galva one, wich is really close but not close enough.

Yeah, I read that after painting the eyes. At this point I’m just testing if they accept it. If not, it’s an easy fix, but it would ruin each character’s uniqueness and some contrast.
Since in the comics they loved changing the eyes color, I though it wouldn’t be that big of a deal. Even Makuta have a different eye color that his set counterpart.

Also, why draw the regular Faxon?

Since Double’s mask and regular Mahri Faxon are so similar, I tried to draw them as a combination of the two, leaving it open to interpretation. My major concern is that mask would end up been considered as a mask of unknown power, that looks like almost exactly as a Faxon, instead of a non aquatic Faxon.

Jesus Christ this is what I’m up against!??

Given the amount of talent in this community, I don’t really have high hopes of winning, but it was a fun exercise nevertheless. So don’t worry about that and go for it! 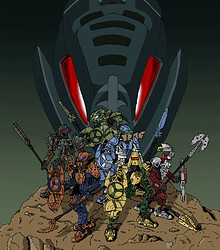 I don’t think the overused of the Mahritoran blade is a bad thing for her, speacially since that weapon hasn’t been the main weapon of any Toa size set (as I recall). I really like the harpoon look that it give, making her spear the more spear-like tool from all the Hagah (including Norik and Iruini).
About Pouks spear, I honestly chose that one because I saw that Galva’s Pouks (that used that piece) end up in the final and because it fits well with the rest of the team. Others knights kingdom swords seems to big to me. Also, the different color of the spear would help differentiate it from Kopaka’s weapon.

Yeah, I read that after painting the eyes. At this point I’m just testing if they accept it.

It won’t be accepted. You will need to return them to the eye colors represented in the winning MOCs. Please do that before the entry period ends, thank you.