"You killed me! Here! See how death feels to you!

Terrible isn’t! Next time be careful what ‘bug’ you decide to crush!"–“Victim”

Immortality or to be undead, most understand how these work to a degree and plenty would seek it. To never end, to be forever, able to do it all. Most would think the worst fate is to see generations of friends go or to grow bored from such eternal life. Few, if any, would find such a blessing or curse to be a terrifying one.

Imagine, if you will, that you are immortal. People can still kill you, you can die any number of ways, but you will always seem to come back. Seem to. Your immortality is not certain, like a limited number of extra lives in a video game, but you can’t seem the number remaining. And if with ever death, it grows closer to the next one possibly being your last. You have come back every time so far, but do not understand why or how. Fear of a final death that may never come. If you can imagine that, you may begin to understand the one they call “Victim.” 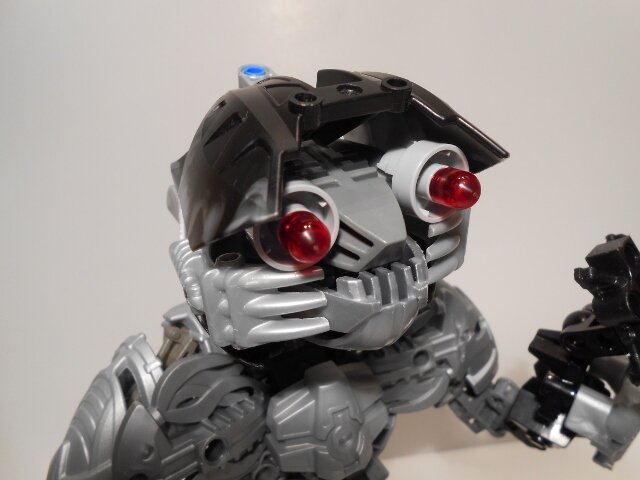 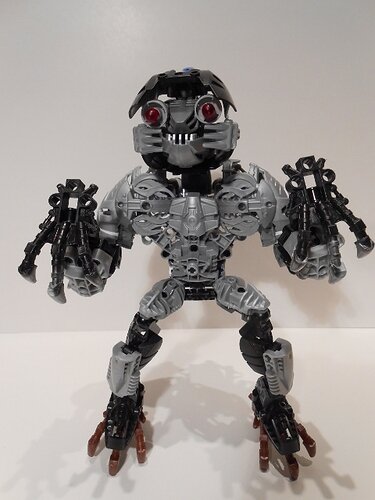 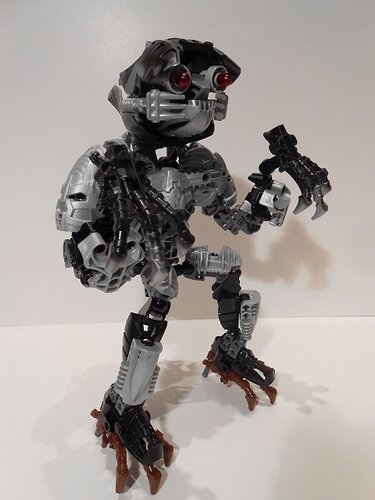 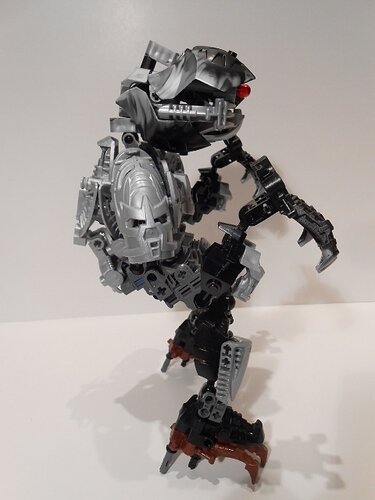 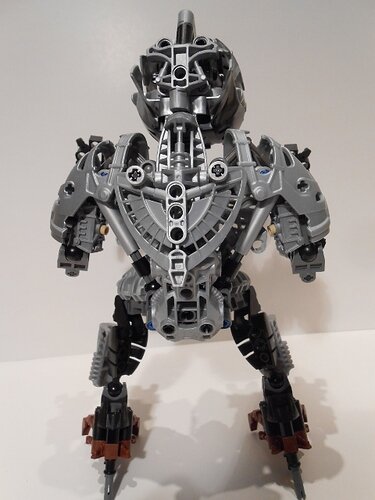 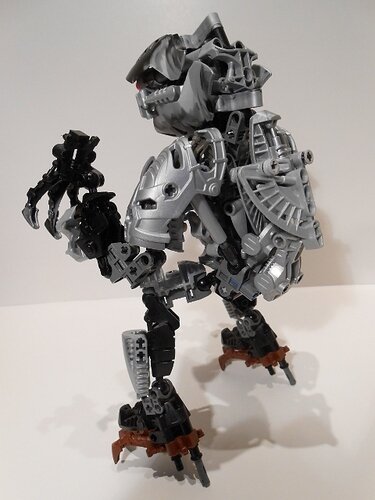 Kanohi: Doesn’t use one.

Powers and Abilities: Among the Dark Hunters, “Victim” is mostly known for one thing, something that surprises all those outside of the mercenaries–revival. “Victim” can be killed, but he cannot die and will always return. Impale him, behead him, cause his body to explode, vaporize him, destroy every last atom and he’ll still come back. Not only come back, but show no sign of any physical damaged done to him. Though as if that is not bad enough, that which killed him will find him to reappear either right behind them, or in front as they look back, and meet a swift end. The only known limitation of this seeming resurrection is that his killer, after killing him, must look back in the direction of his corpse (or where his corpse would be) and then in the opposite direction again. Only after that happens will “Victim” reappear for his revenge.

What this is, be it a power, ability, or technology, none are too sure and even “Victim” himself does not know how it works or why it happens. Only one thing is for certain, and that is “The Shadowed One” seems to know the secret to his immortality and can remove it at any time. But aside from this strange means to never stay dead, “Victim” is swifter than Toa and as strong as Skakdi. His claws are razor sharp, which, combined with his mighty strength, allow him to tear or punch through most armors and beings. Though he has no personal weapons of his own, he tends to grab whatever is available and is decently skilled with a variety of tools. He has learned to be quite stealthy, moving nearly silent and unseen to avoid detection. Though his own clumsiness has failed his stealth attempts many times.

Personality: Grim, but loyal, “Victim” prefers concentrating on the job and little else. This is mostly just to keep his own mind distracted as his power terrifies him and lives in constant fear for when his next death might be his last. Working extra hard to not only please his leader, but to avoid another death. To this end, he is always sneaking around, up on his toes and stalking around ever corner to avoid hazards.

Background: Where did “Victim” come from, when was he recruited, why is he here? None know, but none care much to ask either, for his has one ironic purpose, to be the victim. When he came, he died on the first day after falling for their target’s trap. Only to surprisingly come back with the target’s corpse, with him being alive. And the patterned continued, where he kept falling prey to target’s attacks, falling for their traps, getting captured, getting killed; most started to even believe he had a cursed power to always result in him becoming the victim, to die. As a result, he received the codename “Victim.” A name that would become known throughout the Matoran Universe, but one that none realized belong to one being. To outsiders, it was believed that “Victim” was the general name for all Dark Hunters sent on a suicide mission or ones killed for failure.

“Victim” himself, however, despised the name. He wanted to be better, less clumsy, and to not die. To kill his targets and live, to avoid pain. He felt the pain of every death and the pain never dulled with time. And all the more terrifying was all the other hunters wanting to test his resurrection. What if he killed himself, could he come back? What if another hunter purposely kills him while captured, could he reappear outside the cell and let them out? So many questions, but “Victim” would never let them try. He already didn’t know why he came back and that was during times he was trying not to die. He didn’t even know if there was a limit to unfortunate deaths, let alone purposeful suicide, and refused to try. And in that refusal, he eventually became more skilled and died less. It seemed the universe itself was still against him and death was always near by, but still far less than in the early days.

Though he was always sure of one thing, that being “The Shadowed One” could finally kill him. And for that, he was upmost loyal to an undying degree, eventually becoming a very highly talented assassin for the Dark Hunters. Between his skills, loyalty, and knack of undeath, “The Shadowed One” started pairing him up with particularly untrustworthy hunters. Ones that would, most certainly, try to betray “The Shadowed One” or kill their partner. As a test, “Victim” was once teamed up with “Vanisher,” and the teleportation fiend returned alone again. Only this time when he came before “The Shadowed One” to answer for it, “Victim” came bursting through the doors and severely beat “Vanisher” for what he did to him. After that, only young and naive hunters who didn’t know of “Victim’s” power would ever attempt to kill him while paired up.

Alright, so “Victim” has been the hardest one for me to build and this is my compromise ending build. In my descriptions, he’s always hunched over, on his tippy toes, walking around like a cartoon character sneaking past something. And in that state, he’s about half the height of a Toa, but is supposed to also look bulky, like a bruiser and/or Krekka. At any time, if he were to stand up straight instead of constantly sneaking, he would be Toa height. But for me, just trying to build that cartoony sneaking form was painful. I still don’t think I achieved it, but it’s as close as I’m getting.

The perfect combo of “nothin personnel, kid” and “no u.” Honestly, this goofy face design really complements him as a “joke” character.

Ok, I really love this! That head is fantastic!

The lower legs are very simplified, but OHH THE HEAD I love it.

Well, goofy and derpy is better than cringe, so I’ll take it.

The perfect combo of “nothin personnel, kid” and “no u.” Honestly, this goofy face design really complements him as a “joke” character.

Yeah, kind of. I was going to say he isn’t a joke character, but he does end up in a lot of funny deaths, so I suppose “joke” character is an apt description.

Ok, I really love this! That head is fantastic!

The lower legs are very simplified, but OHH THE HEAD I love it.

Yes, but visually those were always the pieces I had in mind when I thought of “Victim.” Simple, but I personally don’t think it sticks out much in comparison to the rest of the build.

Thanks. I had some fun with the head and it can be modified to add a Visorak foot coming off the front. Makes it look like a witch’s nose. I considered keeping it for the lols, but the connection was not the most stable.