And another Dark Hunter is completed. I’ll be honest, this one is not the greatest. I might come back to this one and give it another whirl when I obtain so much needed parts. But for now, I suppose this is a good enough representation of “All-Star”.

Please let me know of how you think I could better created a Kanoka in the middle of his chest. Comments on how to improve this one overall are definitely welcomed.

On another note, since I am using Flickr now, let me know if I should leave all extra and close up pictures over there and solely post general pics on here. I know I’m a bit picture happy, so if it’s annoying, let me know and I’ll try to make it more enjoyable in the future. 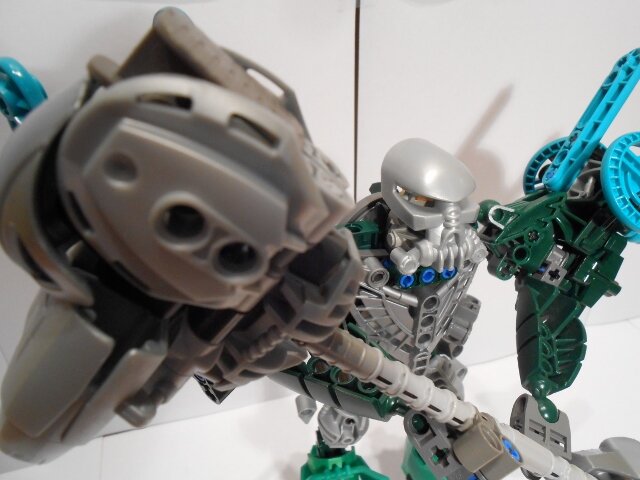 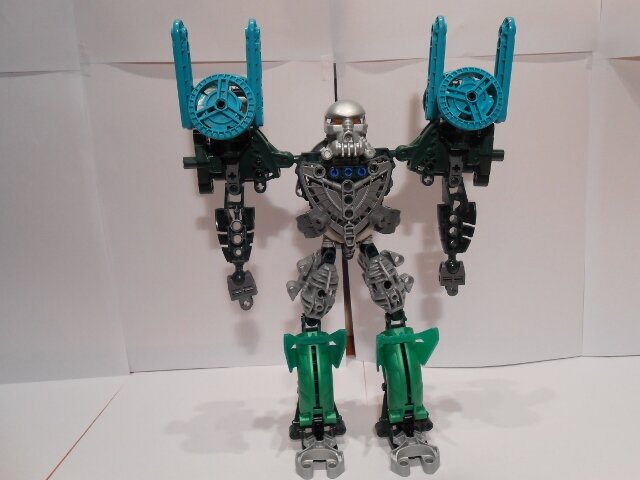 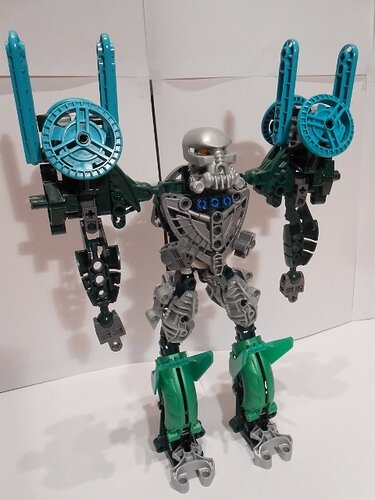 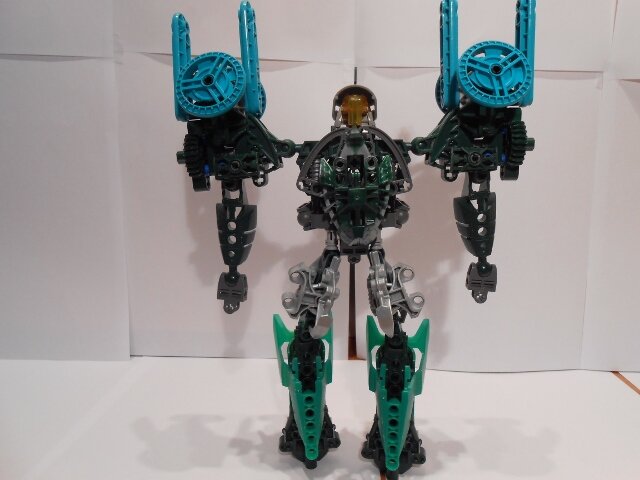 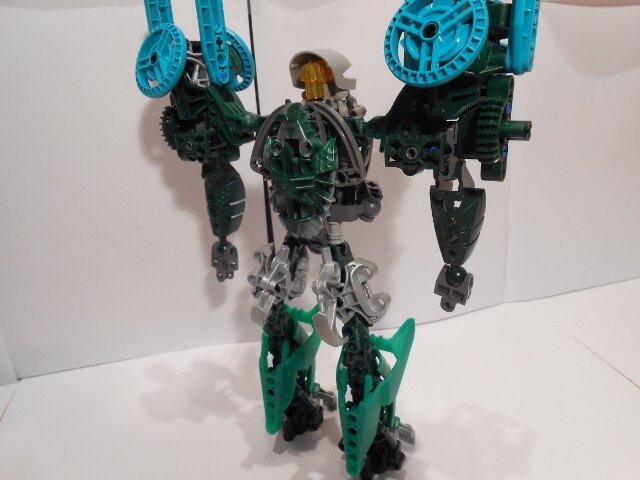 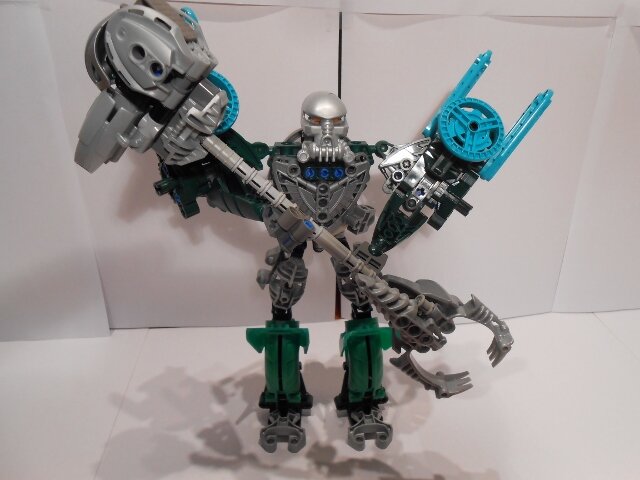 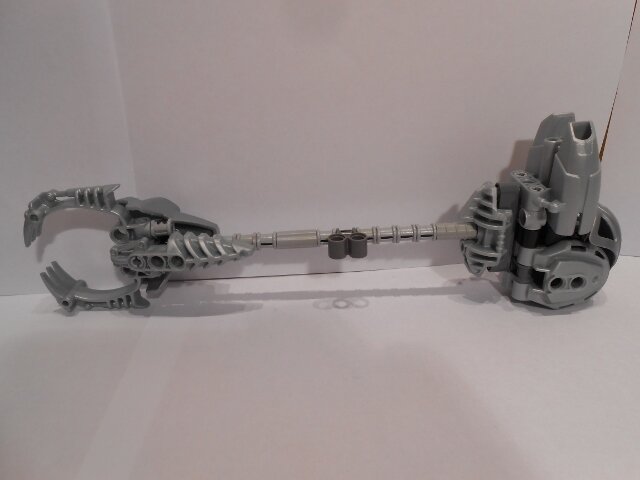 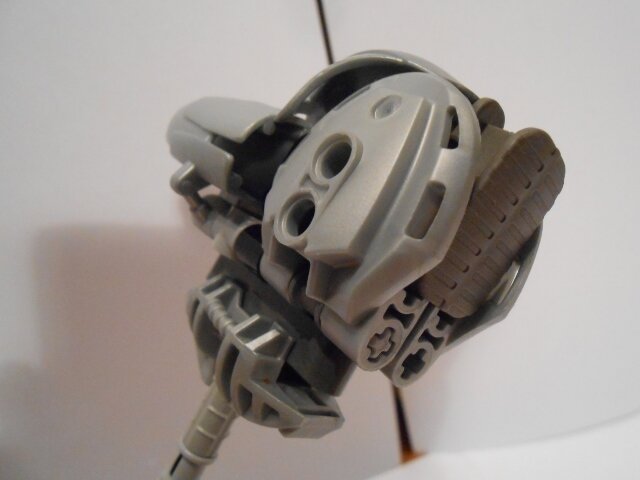 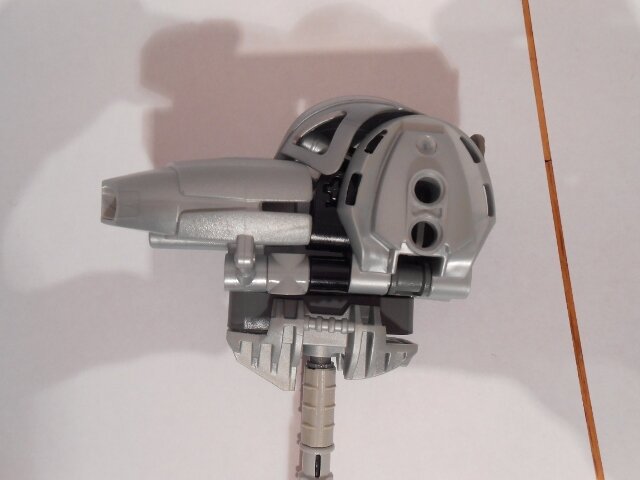 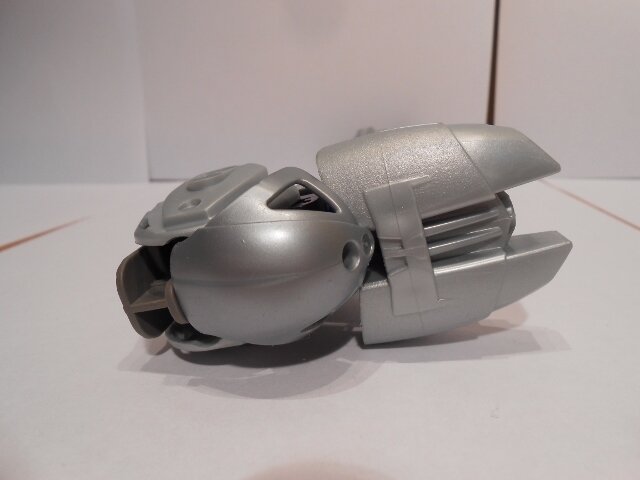 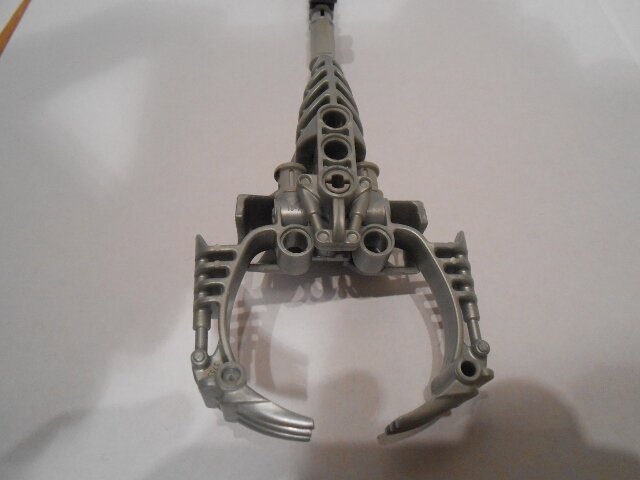 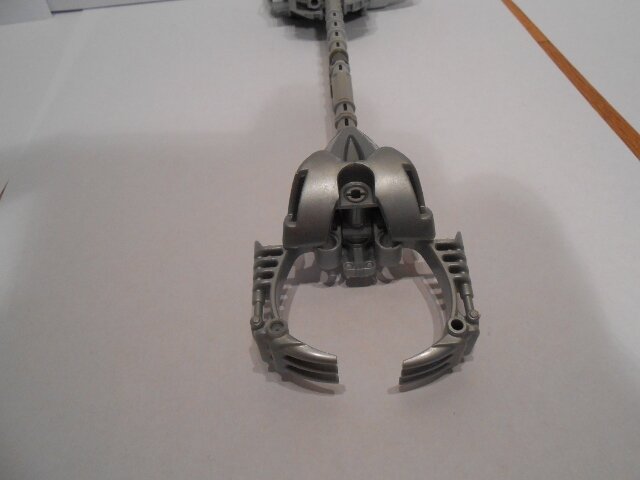 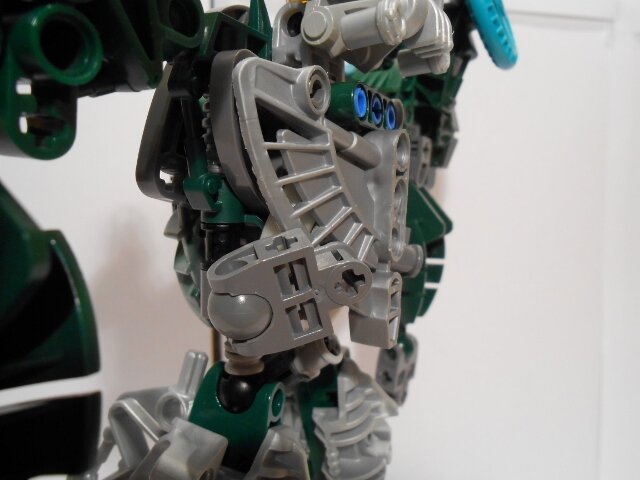 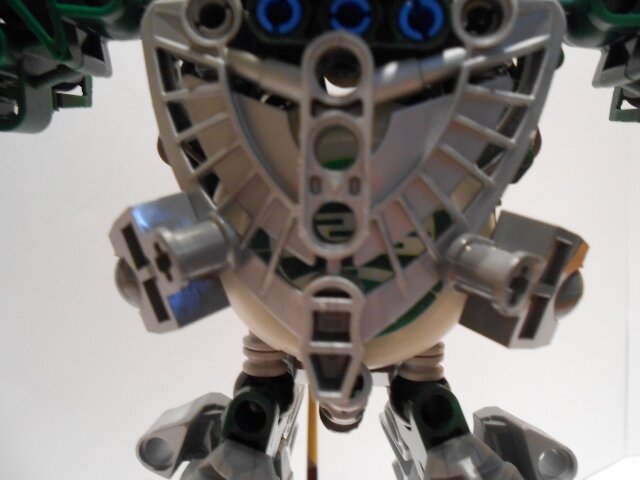 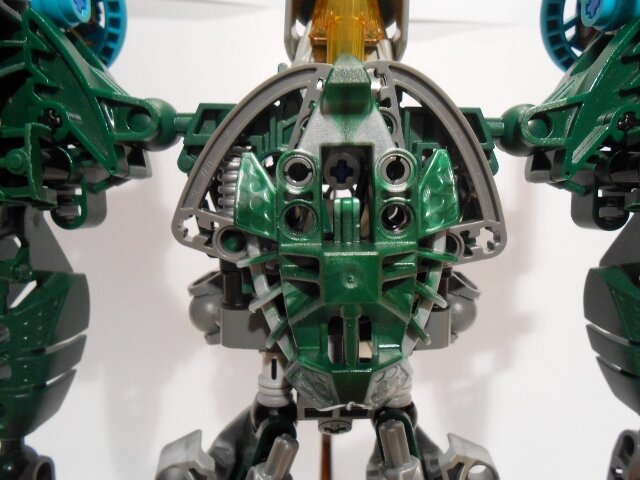 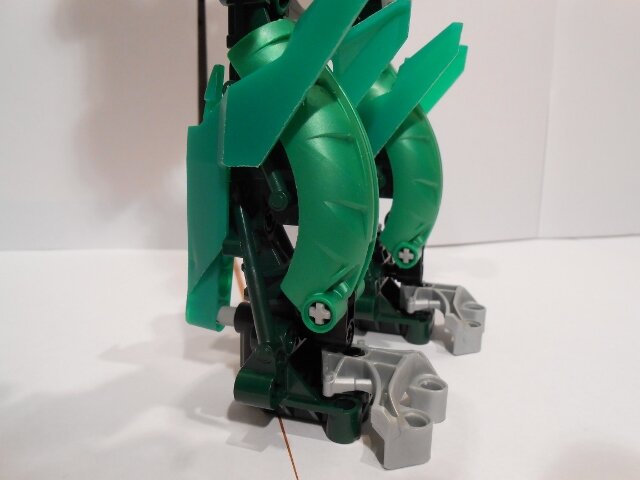 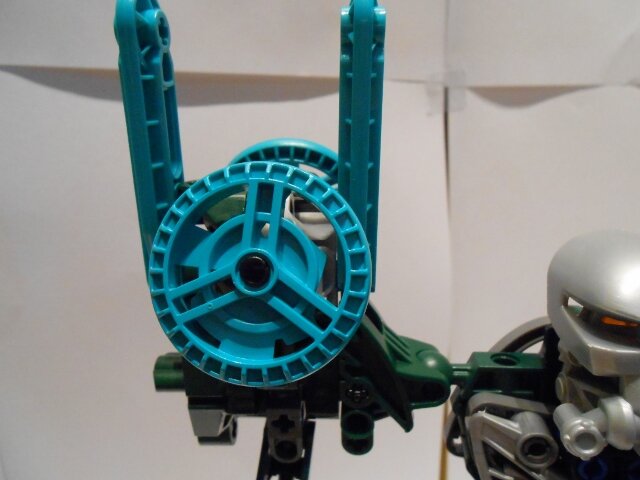 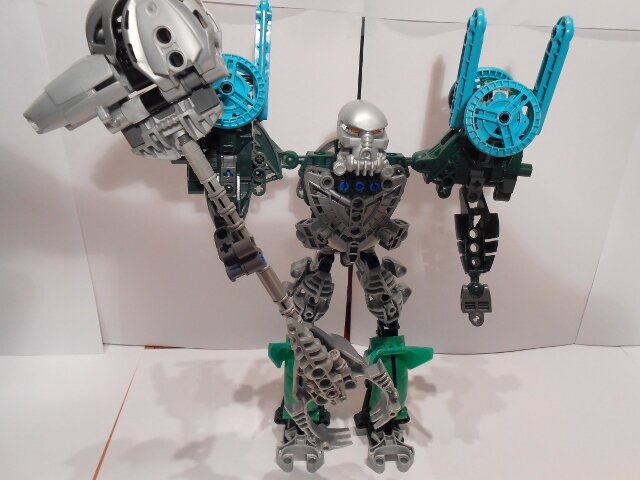 Appearance: Heavily altered to the point where he is no longer recognizable as a Matoran. Generally a humanoid form with green and metallic colors and a Kanoka in the middle of his chest.

Powers and Weapon: “All-Star” still maintains his inaccessible element of Air despite the changes, making him nibble and athletic. With the changes made by the Dark Hunters, he is faster, stronger, and does not require to eat or sleep.

“All-Star” is a master of all Kanoka disk arts; such as his skill in Disk Surfing, able to handle the roughest of seas and chutes. He constantly rides on a large levitation disk, surfing around on the ground. With just a flick of his wrist, “All-Start” can toss Kanoka as if they were fired from a Kanoka Launcher. His throwing arm can toss them much harder, making the disks fly even faster. He even has great command over the disks’ momentum, knowing when to catch a fast moving disk without activating its power with ease. Even with disks tossed at too fast of a momentum to catch, he can touch the bottom of the disk, holding the disk in place while rapidly moving his hand to keep the disk in its original motion until he can slow it down to where it is safe to grab.

He mostly gets his Kanoka from the ones in his chest. As part of his alterations, he has a miniature Kanoka forge built in his chest. It can make any the eight primary disk powers, all of which have the Le-Metru effect of flying further. “All-Star” can rapidly throw and create these disks, but power level is likely to be a 1 at the faster rate. Given the nature of how random Kanoka disk power levels can be, it could be higher in the sped up Kanoka production, but these are rare occurrences.

Aside from Kanoka, “All-Star” uses a weapon similar to a Kolhii Stick (right hand), which he can use to scope up the environment around him and toss it at enemies. Or simply bat and bash with it, given its golf club-esc nature. This stick has a power of its own; when struck against the ground it will cause random hexagonal pillars of differing heights to rise across the battlefield. The only consistent part is that one never forms underneath were “All-Star” was standing at the time he struck the ground.

“All-Star’s” final ability is being able to generate small chutes from his left hand. The chute has a length limit of thirty feet and can move around in any direction, controlled by “All-Star’s” thoughts as to where and what it will do. The chute itself cannot be launched away from “All-Star’s” hand and must stay connected to it. During its use, he is unable to generate any Kanoka and must usually remain standing where he is. Moving location while the chute is active can cause great strain and pain. If he doesn’t used his Kolhii Stick to catch incoming projectiles to send them back, he can generate a chute to catch and then launch them back at enemies. Being struck by the chute will feel more like being hit by a solid weapon or a stone whip. If necessary, he can form an Electro Chute Blade, which appears to be the initial start in how the Dark Hunters gave him this ability. He is only able to electrocute enemies when using the blade form.

Personality: “All-Star” is an honorable fellow and likes to play by the rules. Even if his enemies don’t realize they’re playing a violent version of Akilini, and thus break the rules, “All-Star” won’t hold it against them and continue to follow the rules regardless. Sometimes he even forgets he’s supposed to be killing his targets and goes to make sure they’re alright before restarting the game.

Background: “All-Star” was once a rising Akilini and general sports star in Metru Nui. He was among the best players, and probably the best, until a jealous competitor attacked him. “All-Star” was taken by surprise and hit with a Reconstitute at Random disk, which reorganized him into a crippled and disgusting form. Hearing that the Dark Hunters were great at rebuilding people, he left to employ that service. The Dark Hunters thought it was a very strange request, but it wasn’t every day they got an opportunity to willingly turn someone into a Dark Hunter. Or rather, “All-Star” didn’t know that’s what would happen, he just wanted to be remade into the best sports player that he was. The process messed with his mind, making him think he was always with the Dark Hunters, but also that everything was a game. While he was usually successful with his missions, it was difficult to try and keep the game going.

This looks great! I love the bulky design and creative build.

The real question is, will he get his game on? Jokes aside, interesting moc. Very G1 looking, and I think that’s what you were going for.

Has the World rolled him yet? And is he the sharpest tool in the shed?

Seriously though, looks really cool. As crazy as the shoulders are it certainly gives a distinct look.

His shoulders do contrast seriously with his arms, they look a bit odd, perhaps beef them up to look more consistent?

Thought this was gonna be a Shrek Moc 0/10

Pretty neat build. The arms do stick out a bit too much, and the lower arms are a bit on the simple side. The weapon is really cool and unique in its use of non-weapon pieces.

This looks great! I love the bulky design and creative build.

Thanks, though yes, I do agree that the lower arms are a bit of a problem. Though I was currently low on Technic parts and just figured oh well.

The real question is, will he get his game on? Jokes aside, interesting moc. Very G1 looking, and I think that’s what you were going for.

Well, yes, it’s supposed to fit the G1 aesthetic and style, but I will not use that as an excuse for poor builds.

Seriously though, looks really cool. As crazy as the shoulders are it certainly gives a distinct look.

Thanks. Though I imagine if he stood next to a couple of Transformers, his shoulders would almost look normal.

His shoulders do contrast seriously with his arms, they look a bit odd, perhaps beef them up to look more consistent?

Would need to go custom in order to do it properly (unable to do at the time of build as other projects have eaten my Technic collection), but yes.

Thought this was gonna be a Shrek Moc 0/10

Pretty neat build. The arms do stick out a bit too much, and the lower arms are a bit on the simple side. The weapon is really cool and unique in its use of non-weapon pieces.

I have clearly forgotten the power of Shrek on the internet.

Thanks! The weapon is my favorite part. Perhaps the arms could be a bit closer, but if it isn’t supper wide, how are you to tell that he’s a jock?

Well, yes, it’s supposed to fit the G1 aesthetic and style, but I will not use that as an excuse for poor builds.

Oh, I wasn’t saying it was a poor build. When I said it looked very G1 I meant it as a compliment.