And as I said, back to my Dark Hunter mission. I realized I never gave anyone much of an idea of just how big this mission is, so let me explain briefly. The Dark Hunters are my favorite thing in Gen1, so as a result I ended up writing a lot of Dark Hunter characters. Now that I have a fairly decent collection of parts, it is my mission to finally build all 31 (and counting) characters.

For now though, say hello to “The Mechanic,” weapon and vehicle maintainer of mercenaries. 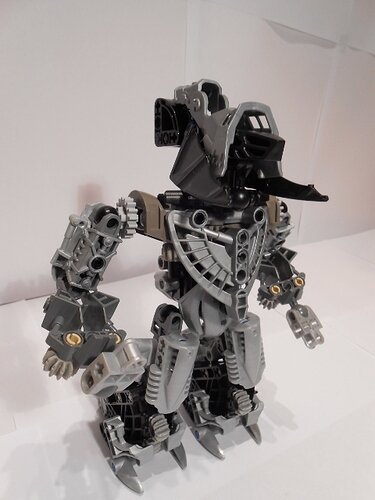 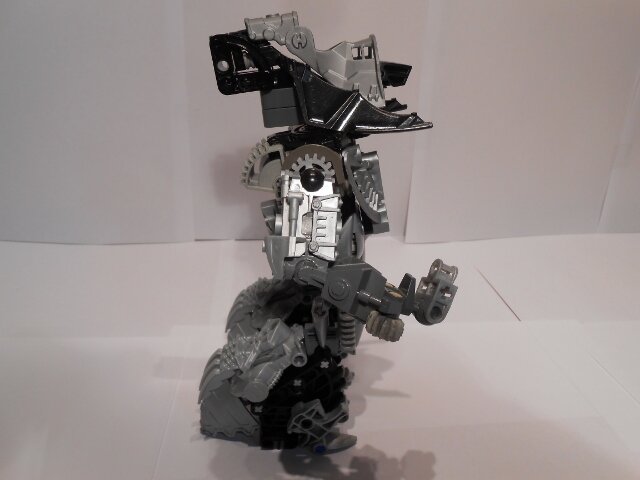 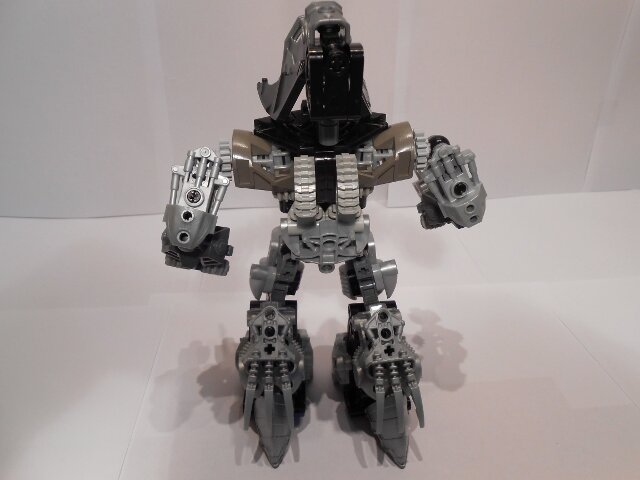 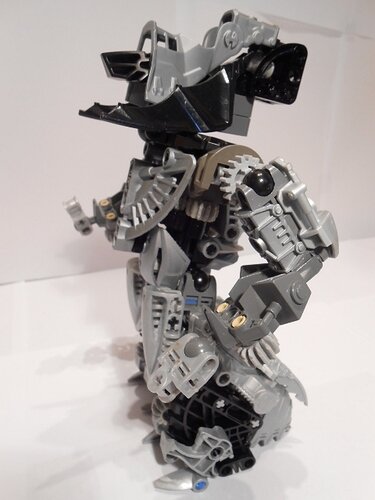 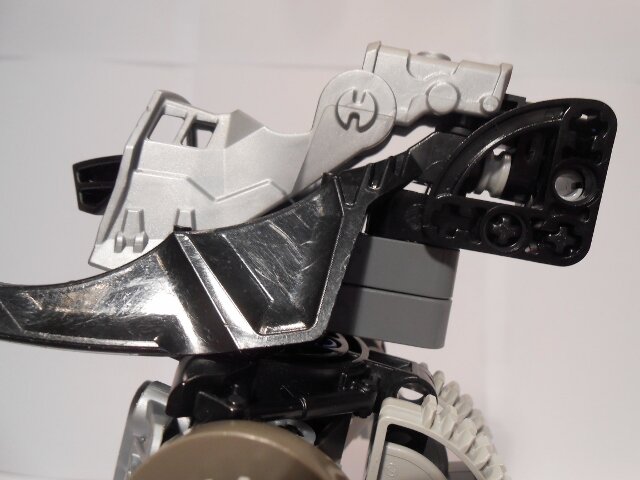 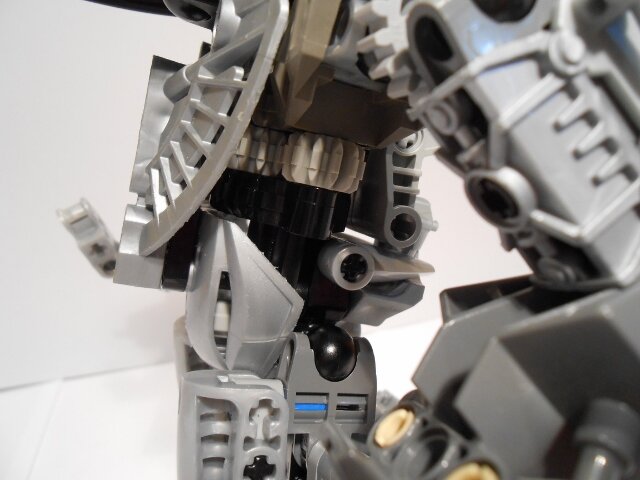 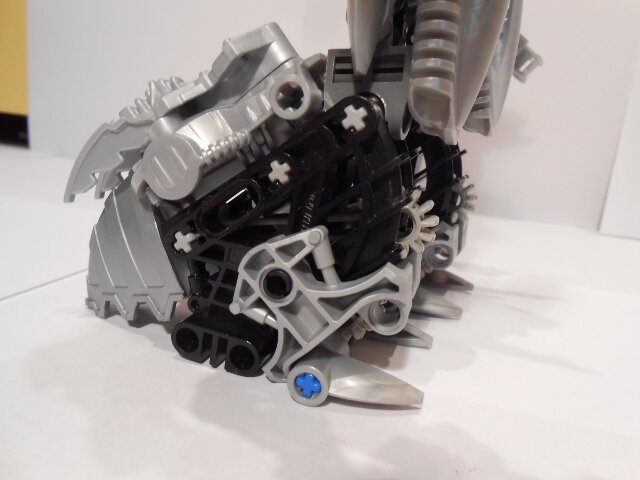 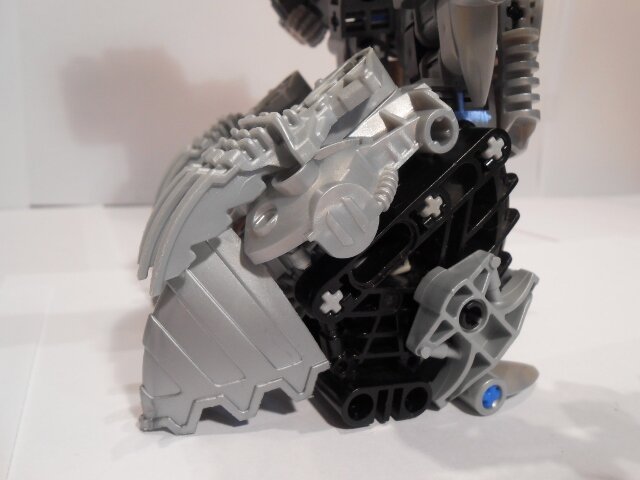 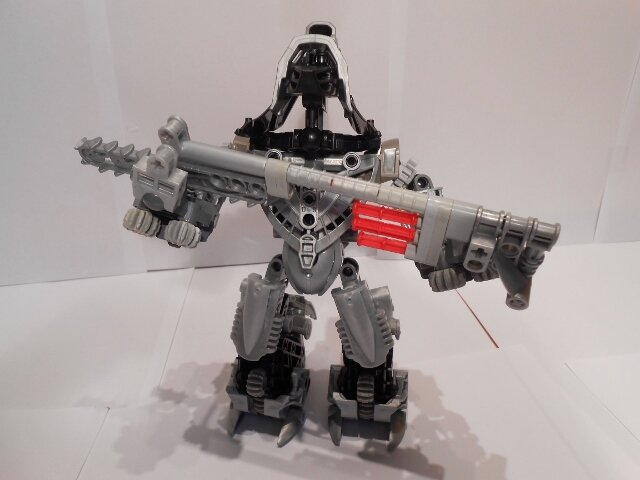 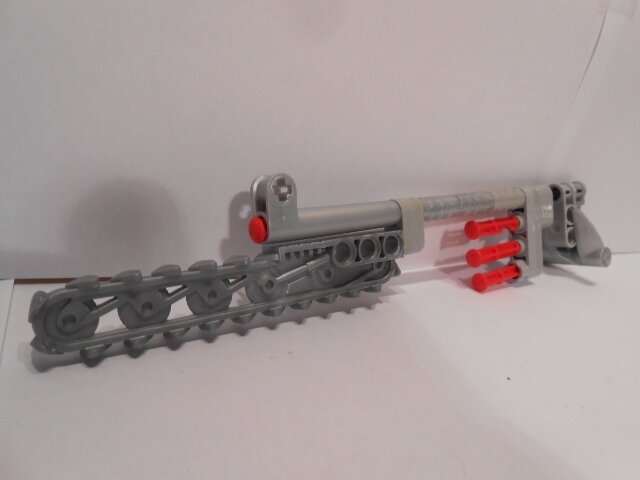 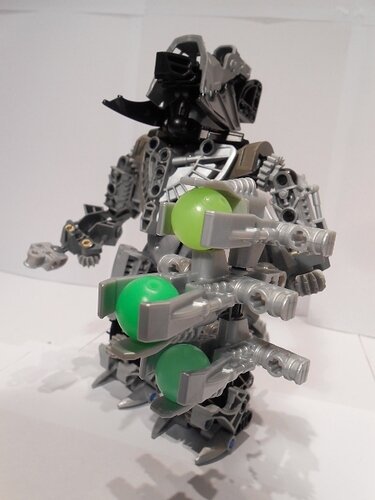 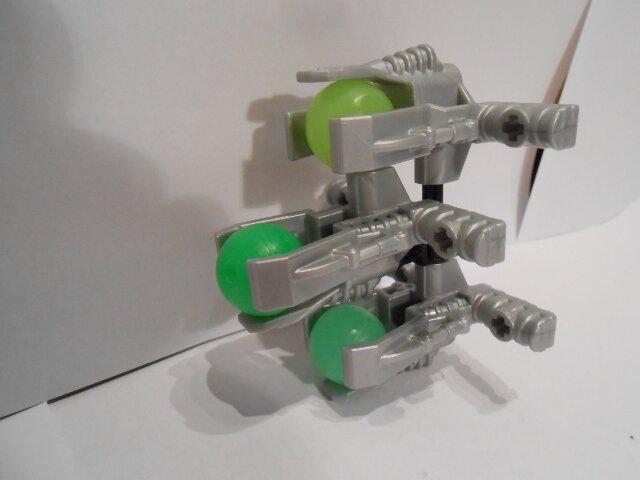 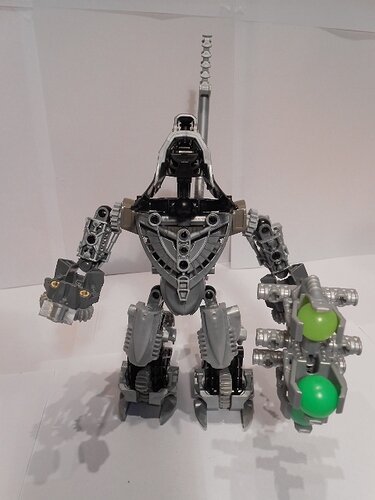 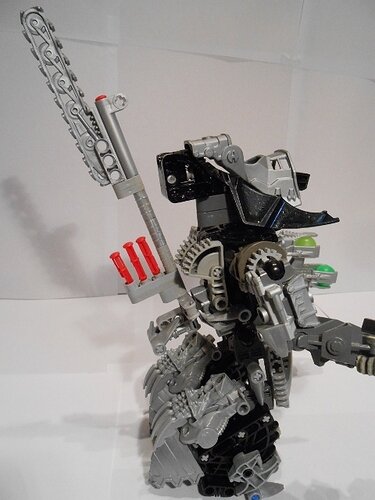 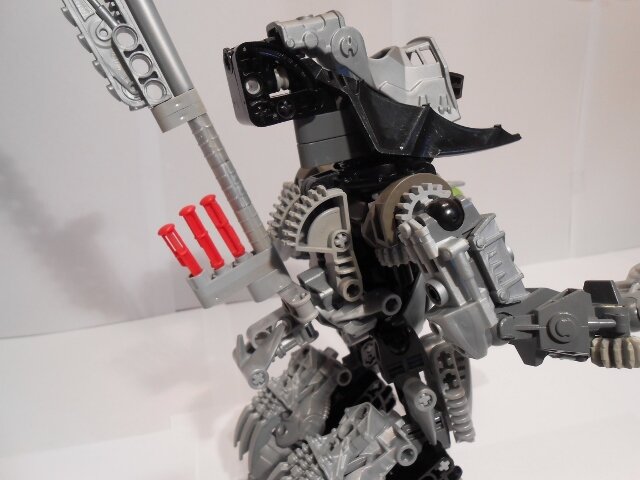 Weapons and Abilities: Being completely mechanical,“The Mechanic” relies on the weapons and built-in equipment to carry him through life. His optics contain night-vision, x-ray vision, magnification vision, and can can produce echolocation and sonar failing that. Due to his work as a mechanic, his frame is built incredibly sturdy, resulting in strength greater than most MU beings, able to move large vehicles around.

As for weapons, he is typically seen carrying a multi-shot Zamor Launcher. These spheres typically contain molten Protodermis, poisonous gases, and Energized Protodermis. Occasionally he is seen wielding a Cordak sniper rifle, with the end of the barrel being made from Shelek Kanoka for silent shots. The rifle can only hold four of the Cordak missiles, one in the barrel and three ready to be pulled in. “The Mechanic” has customized his to include a chainsaw bayonet, with can additional power to discharge electricity while cutting.

Aside from this, he has been programmed with the skill sets of vehicle mechanic, weapon smith, general pilot, assassin, and surgeon.

Personality: Obediently rebellious with a hatred for change. Changing of his tools, Dark Hunter equipment being damaged, and changes to himself. Especially himself, absolutely despises being reprogrammed and physically rebuilt from his current purpose. Those that try these days will find themselves in the spare parts piles. Other than that, “The Mechanic” is cold, calculating, and will get revenge one way or another.

Background: “The Mechanic” was a gift to “The Shadowed One,” given to him many years ago. Who sent him the robot at this point is long forgotten, if it was ever known. Some think perhaps the Turaga of Metru Nui sent it, given the design of the head is similar that of the Vahki. Though he has been altered so many times, who knows if that’s how his head originally looked like anyways.

Regardless, his purpose was vehicle maintenance and repairs, something the Dark Hunters were often in need of given the…practice fights that happen. But it never took long until the other Hunters with more inventive blood decided to alter him for various different purposes. Their mistake came when one of them decided to include assassin functionality, not many changes were made after that.

That is, except for a change by fellow Dark Hunter “Ignominious,” who added medical functionality for assistance in her work. While usually he would not trust other Hunters, it seems he found her argument convincing. Patching up beings was not all that different from vehicles and weapons. That, and there’s nothing more enjoyable than seeing those you hate completely at your mercy on an operating table.

Unbeknownst to the Dark Hunters, “The Mechanic,” and even “The Shadowed One” himself, the robot has a hidden purpose. This so called gift was sent by the Order of Mata Nui and so perhaps one day his real purpose will be revealed. Even to his own surprise.

We do have quite a few squat fellows in Bionicle, not everyone is tall or a titan. Though yes, with how his lower legs-feet are, it does make him look like he’s shuffling around on his knees all the time and it’s hilarious.

I thought he’d be taller, but still cool!

I thought he’d be taller, but still cool!

But then he would be accused of being too tall for a Vahki!

I don’t think dark hunters are open to any real criticism because there are worse designs in the canon.

I don’t think dark hunters are open to any real criticism because there are worse designs in the canon.

I don’t agree with that line of thinking. Just because some designs pale in comparison to the standards we have these days does not excuse a much more recent MOC from looking poorly. One can make it appear as though it would still fit right in without bad or hideous (in the wrong way of course) design.

Always room for improvement and better execution of concepts, even with a more limited part pool.