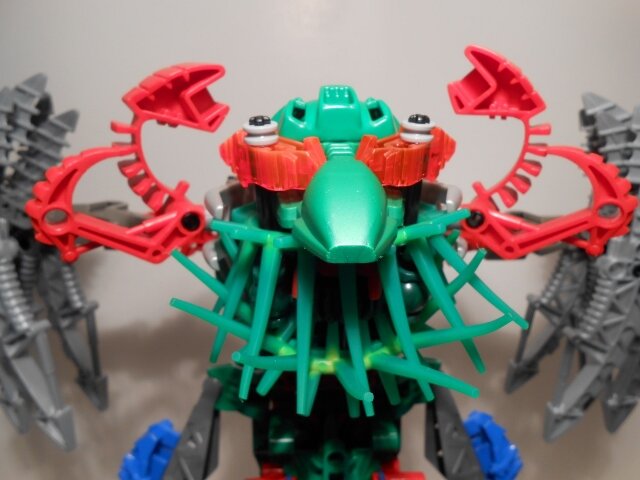 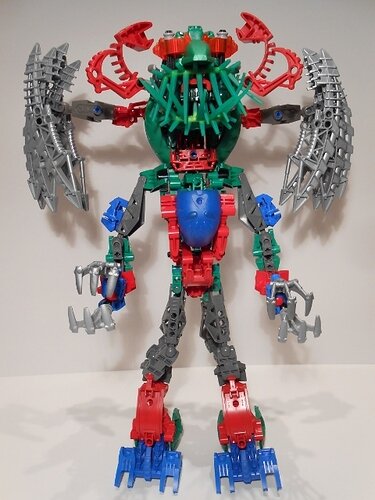 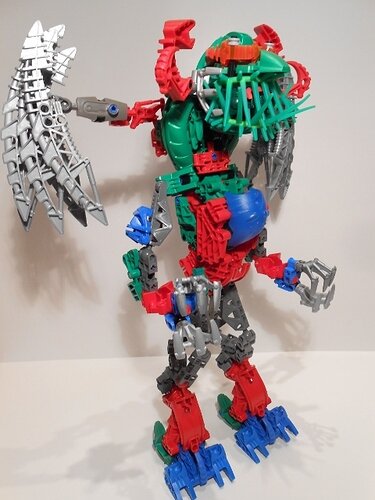 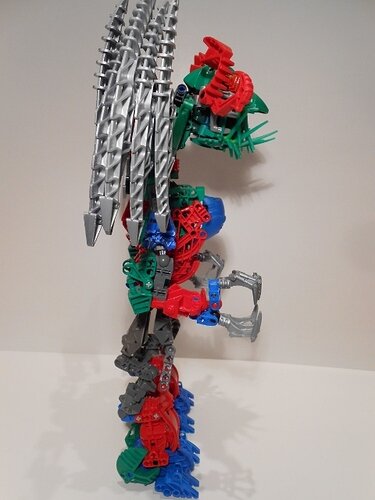 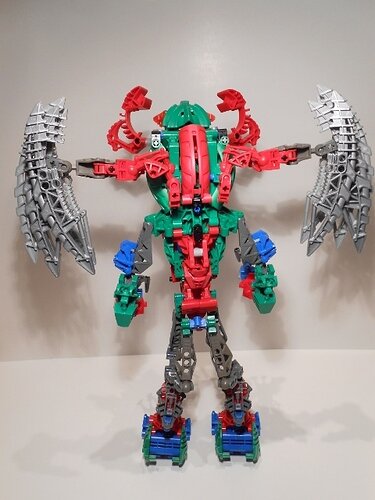 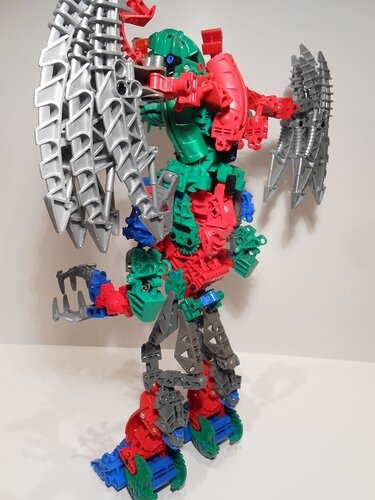 Designer’s Notes: So this fellow, as you’ll see in the profile below, is based on the Rahi known as the Vahki Hunter (albeit mutated). There’s a hyperlink to Biosector01 on the creature below, but here’s two more immediate reference images. 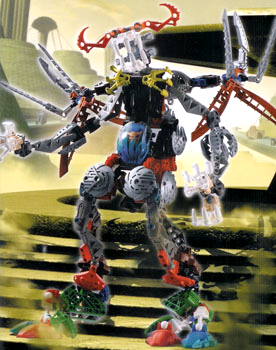 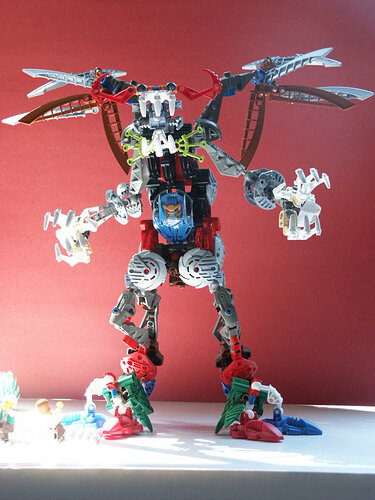 They’re…Well, not great build wise, but it certainly has character, I’ll give it that. Always loved this Rahi more for its story than the model.

As you can see, it has Mata Red, Mata Blue, Mata Green, Mata Brown, white, black, lime green, orange, burnt orange, old grey, and silver. It’s a rainbow of color, that also somehow ends up being mostly grey. For my design, I decided to focus on the brighter colors and try to eliminate as much of the others as possible. Only I didn’t realize how little Mata Green I had to use, with red and blue mostly being feet and Mata torsos. So it ended up as…well, you saw above. Not the greatest compromise; I’m not sure which is less cohesive.

I also thought that the shields near the bottom of the Vahki Hunter sort of looked like a wrestler’s belt. I thought it would be hilarious to try and make one, using a Squid Launcher of the center piece of the belt and the Gravity Shields on the side as additional decor of the belt. Unfortunately, the belt would have been too large to implement for what the torso ended up becoming, so it got left out.

Similarly, I was also going to implement lower arms similar to the Exo-Toa’s extension/punching arm (see profile for why). But due lacking the parts to due so, especially within my chosen color scheme, it had to be left out. I also attempted to have more drill-esc wings with a function that allowed them to spin as such. Though since it would have added another type of color into this already colorful mess, I decided against it and went with these simpler wings.

Ultimately, I think the only part that ended up good is the head. It is my favorite part and I’m surprised it ended up as well as it did. The head is not static, it can move. The movement is very limited, being only able to say “Yes” and never “No,” but better than nothing. Really, this head deserves a much better body than I gave it, but after several torsos, not entirely sure what direction I should have headed.

Powers and Weapon: “Lawbreaker” has a number of abilities and weapons, though his most plain are his horns. His bladed wings not only allow him to fly, but act as a second part of arms, in which the wings can then spin into something akin to a blender. Unless made of weak material or pinned/held in place, being struck by the blender wings will just send targets flying back with just some deep gouges. In the worst cases, depending on where one is hit, they will lose entire limbs or their head. This blender motion can also be used to drill through walls and the ground.

Its forearms have an extension ability similar to other Rahi like the Kane-Ra, able to reach out and grab things from far away. The double-handed claws that it has are also of increased strength, once they clamp down they aren’t coming off unless “Lawbreaker” wants to let go of you. Unless you have the strength of Makuta or cause him enough pain to let go.

“Lawbreaker” is completely immune to Rahi Control, the Stun Staffs, and other emotion manipulating powers. In addition, he has an odd power that allows him to create constructs of his head and hide them in the ground. When something walks over it or nearby, he is altered and able to see what it is and decide if he wants to attack. If he does, he will be teleported over to that location and burst out from the ground. He is only able to place three heads, they must be on the same island and he must be on that island for them to work as well. If he leaves, the heads will vanish.

Another unusual power is his ability to consume Toa Power from Toa he eats and then able to use this power. Such as blasting items with the energy and turning them into Toa Tools or masks of power. Though his primary use is to blast large groups of Matoran in hopes that some of them turn into Toa to eat them and get more Toa Power. Matoran not meant to become Toa are killed by the blast.

Personality: “Lawbreaker” loves Vahki, Toa, guards, and other law/rule enforces. Loves them in the sense that he loves to eat them and will hunt for them. Although he can be quite stealthy, this is usually only to get the drop on someone for fun. To his own detriment, he doesn’t care for being seen or getting caught as it brings in more law enforces to munch on. Sometimes he is a complete idiot, mistaking statues for guards and will try to eat them.

Background: “Lawbreaker” was once a regular Vahki Hunter living in Metru Nui, feasting on the robot cops. One day however, this Vahki Hunter got caught in the middle of a battle between some Dark Hunters and Toa. He was accidentally struck with a couple different mutation powers and weapons. Some of the mutations cancelled each other out, but when the process had finished, the Vahki Hunter was a new creature. He attacked the Toa, killing several before being knockout. Seeing him as a great potential ally, the Dark Hunters nabbed the unconscious hunter in their retreat.

Since being inducted into the Dark Hunters, “Lawbreaker” has been sent on missions ahead of other Dark Hunters to kill guards and other defenders. If there are pesky Toa in the way, he is especially sent to take them out. However, because of his habit to kill anyone that enforces the rules, he has also killed many other Dark Hunters. Despite discipline, “Lawbreaker” hasn’t learned his lessons very well. Should he do it again, they might very well send him to try and destroy the defenses around Zakaz as a suicide mission.

The thing that makes it here is the face.

The build is mediocre and awkward, the colors clash, but that face…

I absolutely love that face!

Those mctoran arms for horns? genius.

Those teeth, the eyes? beautiful.

I love all the different colors!

I kinda wish that blue wasn’t a part of the color scheme. The use of older pieces is good though. Makes it feel more like an official set.

The thing that makes it here is the face.

The build is mediocre and awkward, the colors clash, but that face…

I absolutely love that face!

Those mctoran arms for horns? genius.

Those teeth, the eyes? beautiful.

As I said in my notes, pretty much the only good thing that came out of this was the head.

I love all the different colors!

Thanks. Though I wish I had a lot more green.

I kinda wish that blue wasn’t a part of the color scheme. The use of older pieces is good though. Makes it feel more like an official set.

The original plan was for it to be a lot less blue. Just a blob in the chest and a little on the feet, and perhaps on the arms. Ended up not having enough of green or red to make that work, so much heavier blue it was.

I was thinking this reminded me of the Vahki Hunter before you mentioned it or I saw the picture, so nice work! I do think the legs are lackluster though, and should be longer to fit the body

My eyes! Please give him a proper color scheme!