"Oh look! Another survivor! Aha! I’m surprised this many people made it! . . .

What do you mean what happened? It’s obvious! . .

You seriously don’t know? Well you see, someone went ahead and–
What? That’s not how to start a story? Where you expecting me to go on like some traditionalist Turaga and start with, ‘In the time before time, we the-’?!

Fine then! In the time, after time…"–“Annalist”

“Annalist” is my latest character for a new Bionicle Roleplay. More details about the character below. 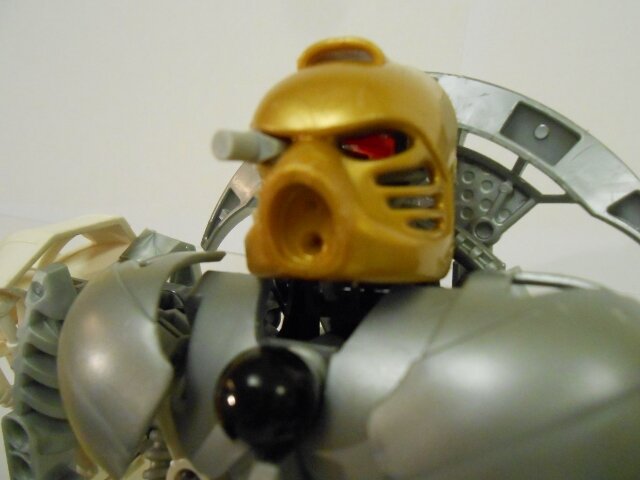 Notes: Yes, I know this first picture is blurry. No matter what I tried, I couldn’t get my camera to focus on his face. Luckily the others turned out a bit better. 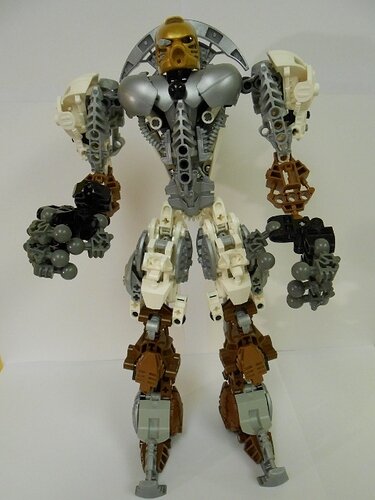 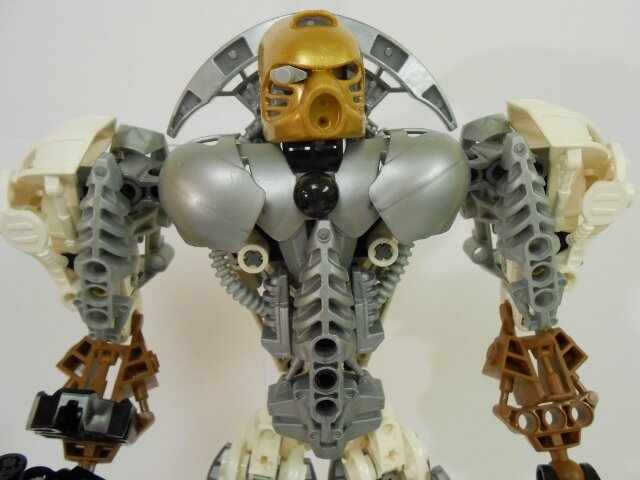 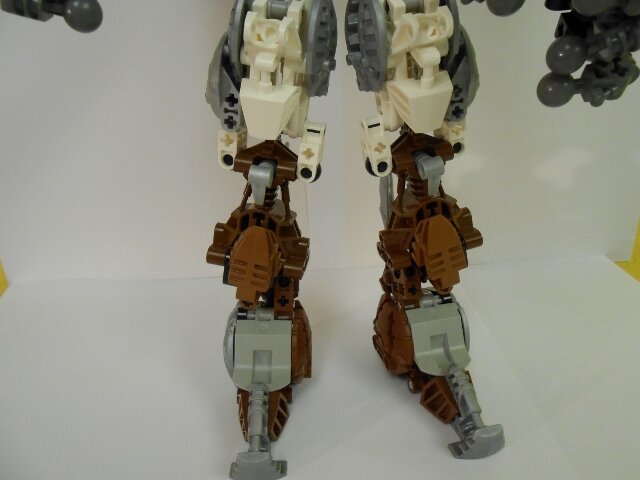 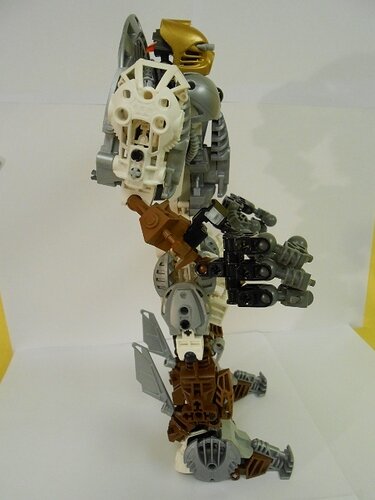 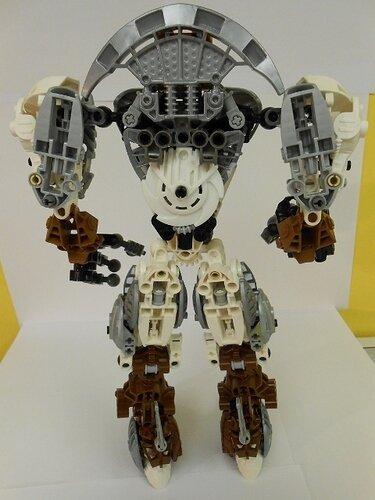 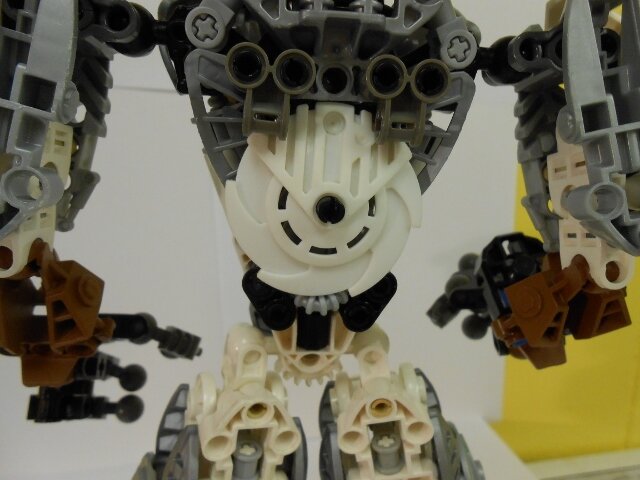 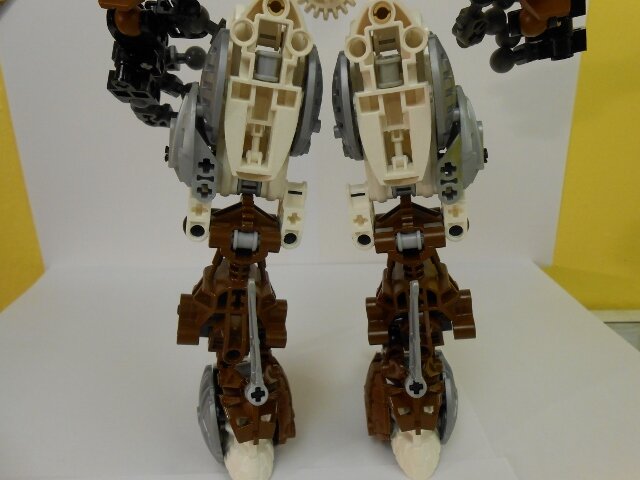 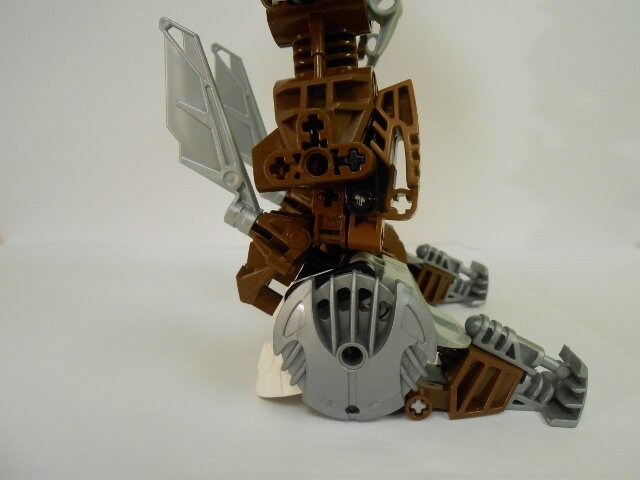 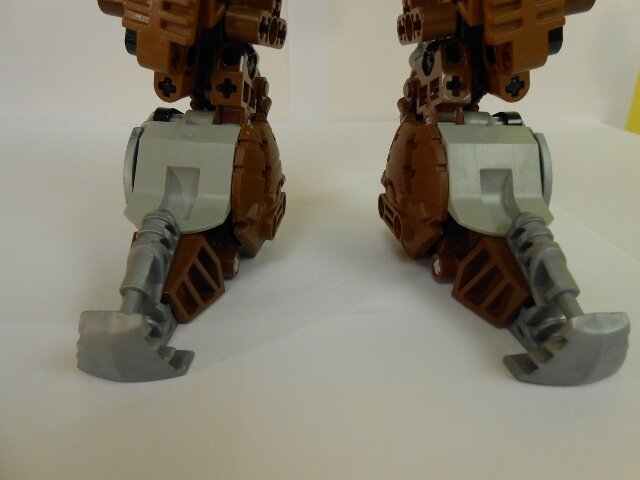 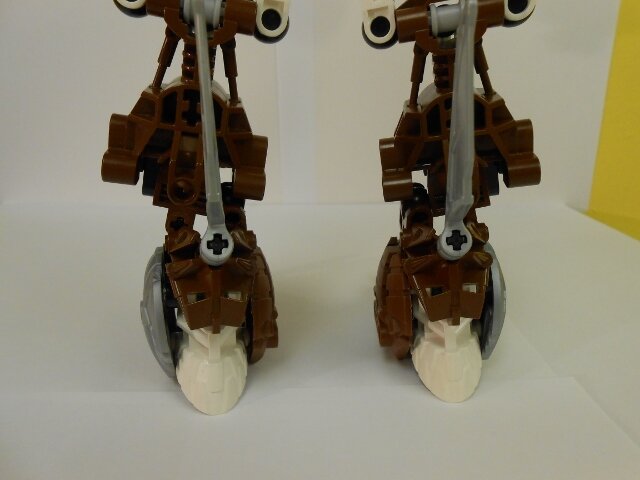 Designer Notes: I chose the Piraka skull’s for part of the feet as I thought their teeth looked like the heels of some tennis shoe designs. The rest sort of just built up from there. It’s easily my favorite part of the MOC, but I could use some suggestions to make it better. 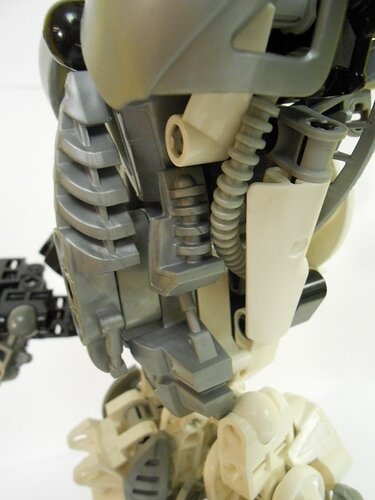 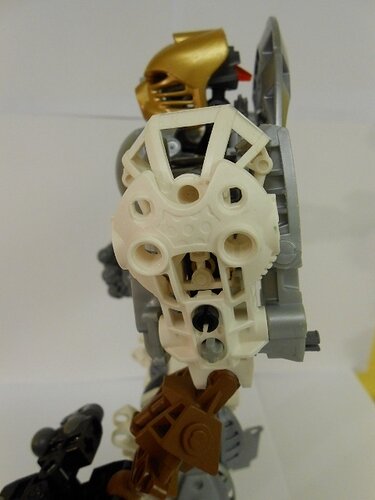 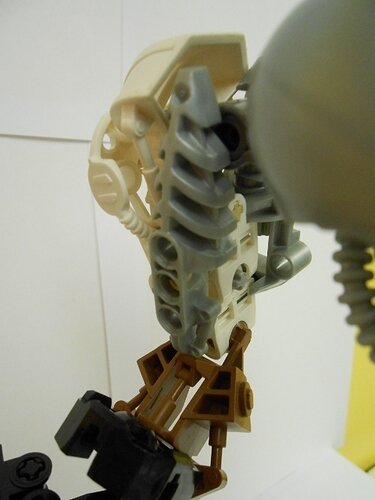 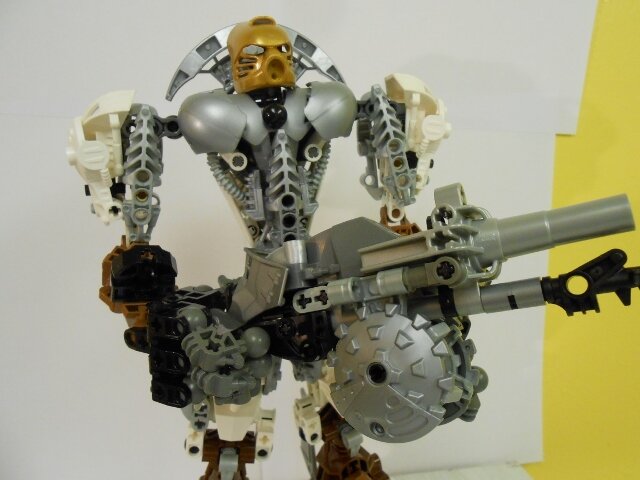 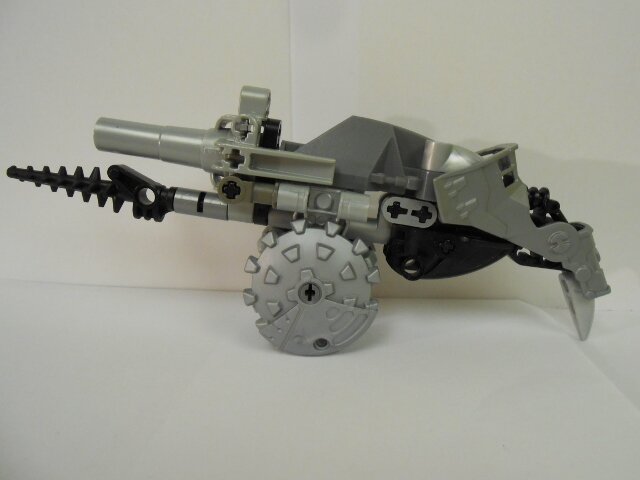 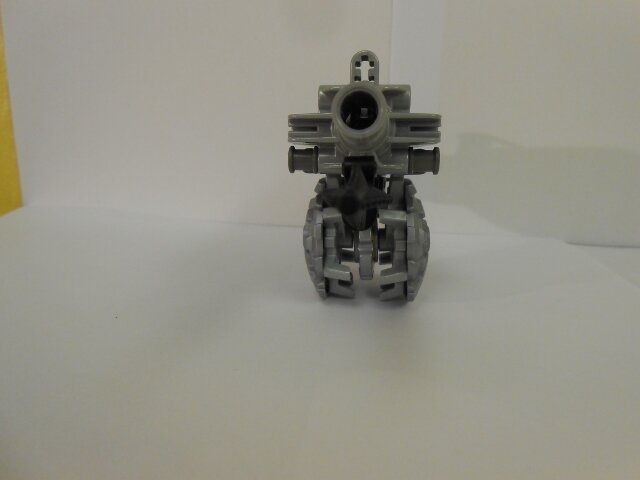 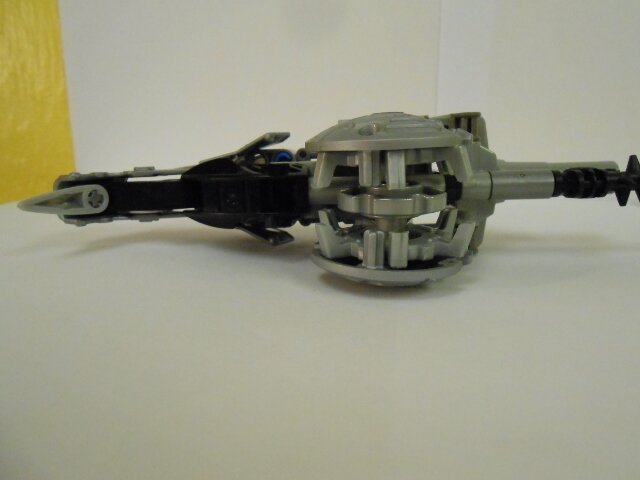 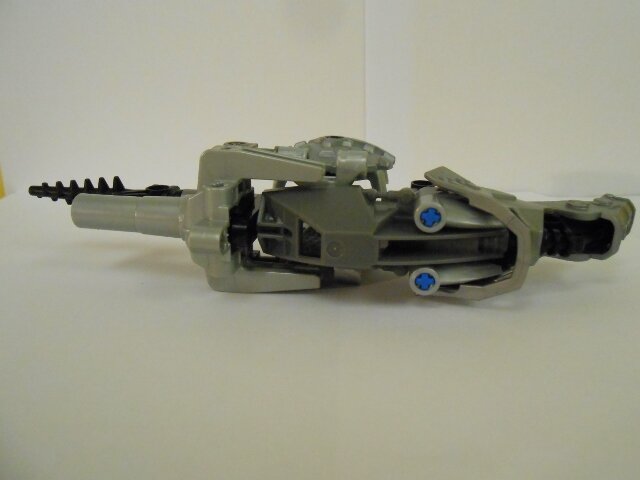 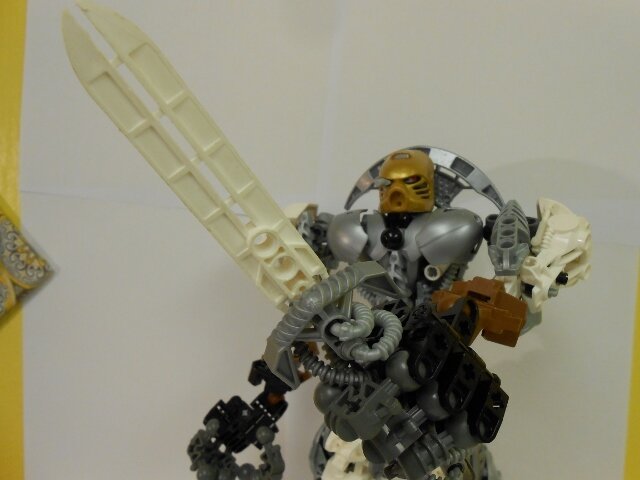 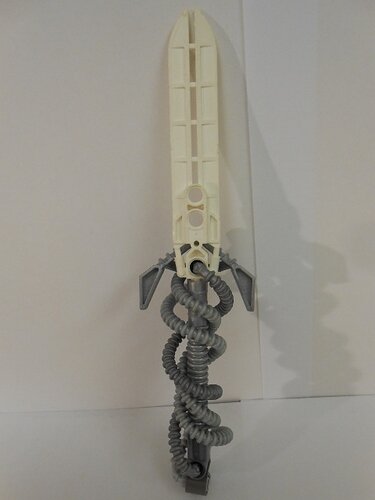 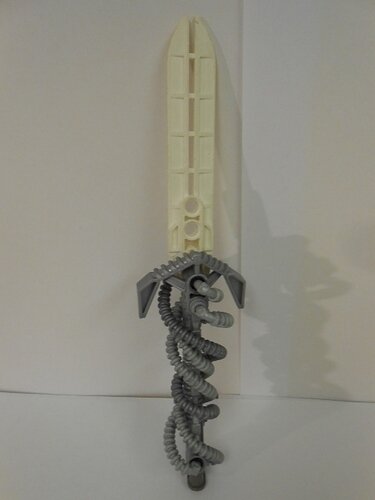 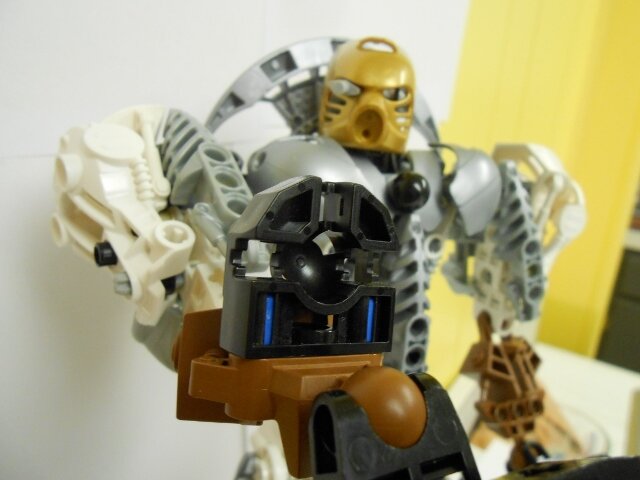 Appearance: “Annalist” is a brutish titan, just a tad taller than Maxillos robots with massive hands and feet. Primarily white, with a brown secondary coloring and covered in armor. Logged in his back is a chunk of the Great Sundial, with the Gnomon from that sundial stuck vertically in his right eye. Around his golden Hau’s right eye, and the Gnomon, is the Matoran symbol for zero.

Powers: Mighty in strength, “Annalist” comes close to the physical power of Makuta and rivals similar titans like Axonn. Though far more so in his legs, able to run incredible speeds to match a Noble Kakama. While running at his top speeds, he can kick open previous tears in time and space, allowing him to reopen dimensional gateways, pocket dimensions, and teleportations. The instances of teleportation being the most dangerous as, unlike gateways, is instantly taken to where the previous thing teleport. He can feel and sense these time and space fluctuations, giving him some indication as to their places.

He has a small affinity for the element of Lightning, resistant to electrical shocks and able to absorb and store this energy. Most useful with his natural ability to discharge his body’s energy as raw energy blasts at foes through his hands, feet, or weapons. “Annalist” also has a high resistance to the effects of Antidermis, taking large amounts absorbing the substance before become weakened and/or enslaved to it.

Aside from this, his only other known natural ability is to create and dissipate stasis fields. This applies to both life force slowing and time based forms of stasis fields. As such, he himself is immune to the effects of stasis, but can only put others in stasis for a short period of time.

Mask: Like many species, “Annalist” can wear and use Kanohi. His current mask is a Golden Kanohi that he claims is called “Rahi.” Perhaps a fitting name as it contains the mask powers of the Faxon, Zatth, Mask of Rahi Control, Mask of Insect Control, and Rau. As with other Golden Kanohi, he can only access one mask power at a time.

Weapons: “Annalist’s” primary weapon is an energy hand cannon. Its blasts are usually powerful enough to vaporize a Toa in a single blast. However, it has a very slow rate of fire and difficult to handle. The cannon will occasionally kick on its original function and change from lethal blasts to just damaging or outright harmless. The weapon also has a drill bayonet attached.

His secondary, though often used in tandem with his primary, is a short sword. Deceptively simple looking, the weapon has Antidermis coursing through it. Being struck by the blade acts much like a Zamor Sphere, transferring some of the Antidermis into the target. Often this just weakens foes, though can lead to mind enslavement if infected enough. Perhaps as an odd side-effect, the blade seems to be semi-sentient and will occasionally produce shadow tendrils to grab opponents and force them onto itself. However, despite his own resistance to Antidermis, it seems “Annalist” is worried about the substance taking him over and has a reserve of Energized Protodermis built in as a safety mechanism. Should he ever feel the need, he can release the EP into the Antidermis section and kill the substance.

Equipment: Other items at “Annalist’s” disposal is a small scanner and recording device attached to his right arm. Similar to the Book of Chronicles, it records video footage of events and happenings around “Annalist.” It also contains a scanning function with a power similar to that of the Mask of Psychometry, showing the histories of scanned items. The information it gives is random, the points in time it reveals unknowable beforehand.

Personality: A tad mad, “Annalist” is obsessive over history and the flow of time. Often times going around trying to rewrite “The Recorder’s” accounts and walls of history to what he believes is the correct flow of events. Despite this, he is takes very meticulous, reliable records and maps of places he visits. Has a bad habit of stealing items he considers to be important parts of history, including people.

Background: It is unknown where Yomtāima comes from, most guess the Southern Islands or perhaps a former member of the Hand of Artakha. Though where one comes from matters little to the Dark Hunters. If you can do what they want, Odina is your home and “The Shadowed One” is your master. Especially if you randomly show up in their fortress.

Found babbling nonsense, Yomtāima’s own power had driven him mad, accidentally traversing several alternate realities and pocket dimensions. And though he finally made it to his home dimension, he ran into one of “Vanisher’s” teleportations to Odina. Panicked, it took some time, but the Dark Hunters eventually brought him down to a more “agreeable” state. While they healed his wounds, they managed to restore most of his mind and taught him how to use his powers properly.

From then on, he would be known as “Annalist,” the Chronicler of the Dark Hunters. If he was not watching and recording the events of other hunters’ missions, he was sent to scout out pocket dimensions. Sometimes he would be sent to try and find an alternate reality to the possible outcomes of events.

Often times “Annalist” was paired up with another Dark Hunter as he was considered to be too much of a wild card to be left alone. While he was still learning to handle his powers, he sent his partner into an old teleportation. This would have been fine if the building had not been built in that place since it was last used. Some poor Matoran found the remains of the hunter coming off the walls. After similar instances, “The Shadowed One” stopped pairing up “Annalist” as his missions proved too dangerous and costly.

The deceased partner was where “Annalist” obtained his hand cannon. The hunter had a quirk of letting “Destiny” decide, with the cannon firing based on whatever power level the chamber landed on. Though “Annalist” altered the weapon so that it would always fire on “death,” his poor craftsmanship would sometimes lead to it changing settings.

When Voporak came around, the servant drove “Annalist” crazy. The constant aging field around Voporak sent “Annalist’s” senses into overdrive when near, giving painful headaches. Though once the legendary Vahi finally came to be, “Annalist” made himself a rival of the Steltian and tried to get the mask first. Sadly for him, between “The Shadowed One” and an annoying Mohtrek user, he always being thrown off the trail.

Then one day, the Vahi was destroyed. “Annalist” has no idea who or what destroyed the mask, only that it is gone. One moment he was inside the Great Sundial, stealing its golden Kanohi, and in the next everything broke and shattered. When he awoke, he found pieces of the sundial logged in his body and a very strange, broken reality with fragments of time strewn about. Whoever did this was going to pay and “Annalist” seeks to restore time.

The rest is amazing but the head is too small. He’s like a reverse-chibi

He’s scary…and I don’t know why.

He’s got something in his eye

I love this moc, it’s bulky but solid, it’s really well constructed and I love the legs and feet. Great use of piraka skulls.

looks cool, but you took some big parts from Axonn’s design

@UnJaguk: While I personally think the head size is fine, I can definitely see where you’re coming from. Makes it pretty hilarious though.

@keiththelegokid: Oh, I’m sure you know why, deep down.

@brickobotface: Of course, the weaponsmith likes the weapons the most.

@Kardax: Thanks! You can send those cookies to * insert address here *.

I love the design of the legs especially. It reminds me of those old 2004-5 era dark hunters. One heck of a nostalgia trip even though there are clearly more modern parts on him as well. Same goes for that unique looking sword of his!

I should say though, it’s spelled “Analyst”

His mask sounds remarkably similar to Gringat’s Kanohi Sirion, which is a combination of the Faxon, Rau and Zatth. Main difference being he has no ability to control other creatures beyond, well, asking them for help.

I love the design of the legs especially. It reminds me of those old 2004-5 era dark hunters. One heck of a nostalgia trip even though there are clearly more modern parts on him as well. Same goes for that unique looking sword of his!

I should say though, it’s spelled “Analyst”

His mask sounds remarkably similar to Gringat’s Kanohi Sirion, which is a combination of the Faxon, Rau and Zatth. Main difference being he has no ability to control other creatures beyond, well, asking them for help.

Thanks! Though that is the proper spelling. I know, at first it would seem like it should be “Analyst,” but here’s some quick dictionary definitions.

As for the mask, I was solely going off of the golden Hau inside the Great Sundial. It had Rahi written above it, so I figured why not and gave it a bunch of Rahi powers.

But the Kanohi Sirion sounds much closer to Aquaman’s powers.