“Only through me can you see ‘The Shadowed One,’ aside from me there is no other way. Unless he comes to you, and if he coming for you, you’ll have wished for me instead.”–“Escort” 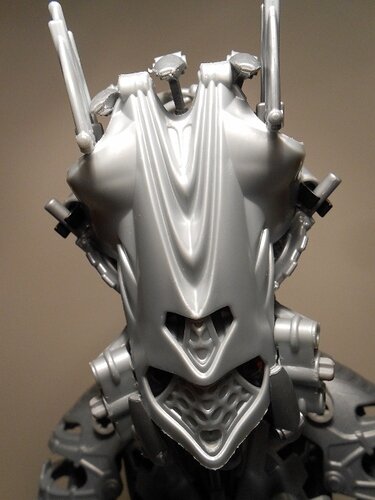 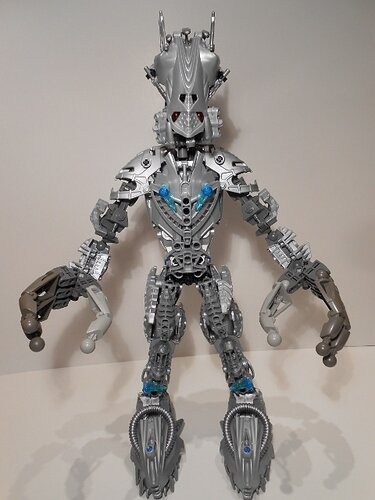 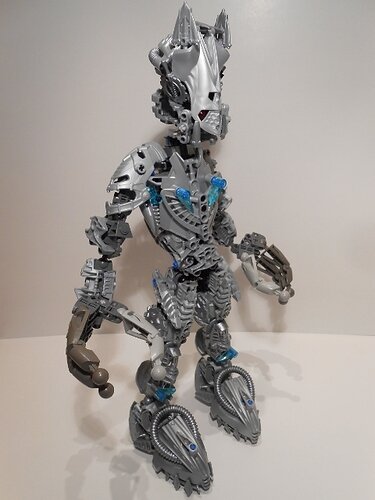 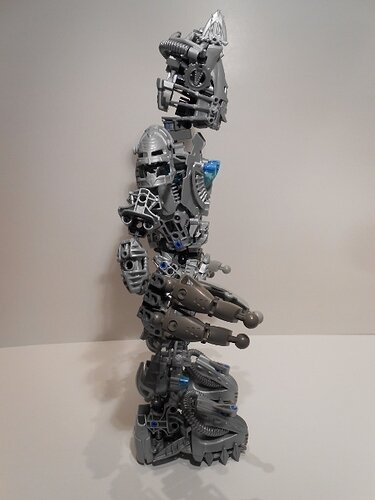 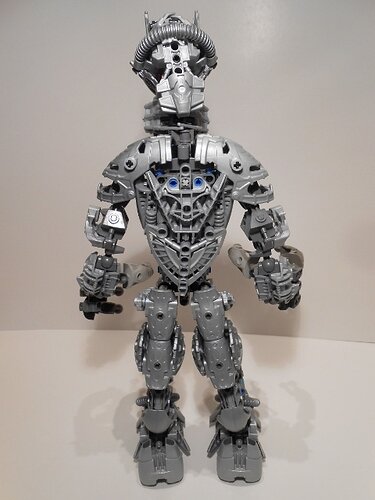 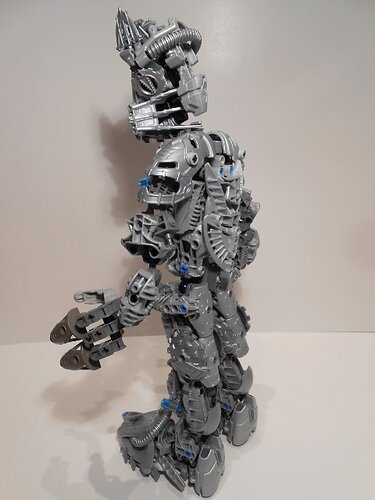 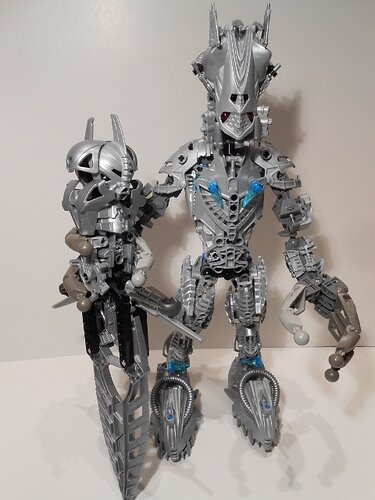 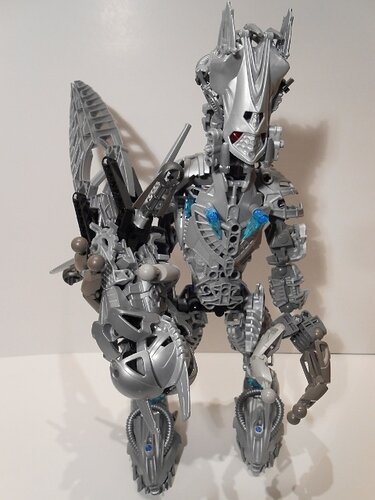 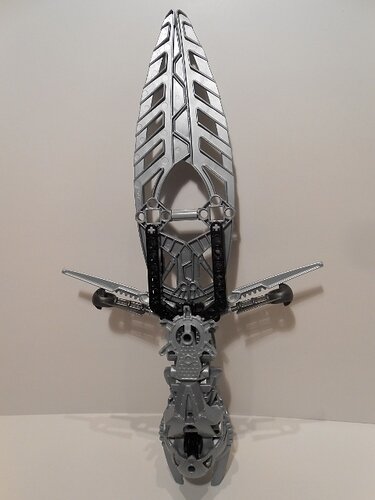 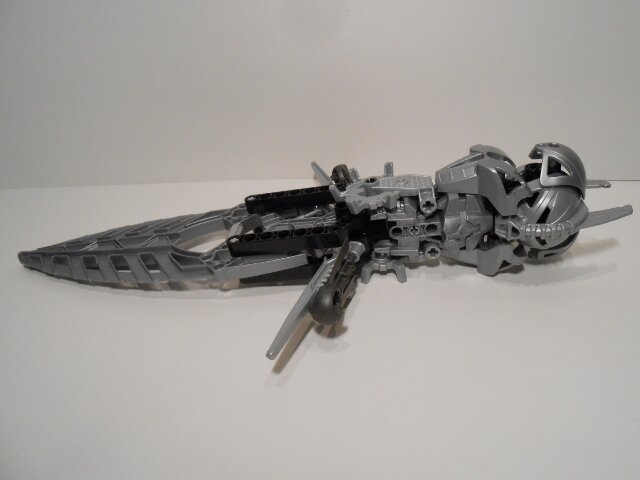 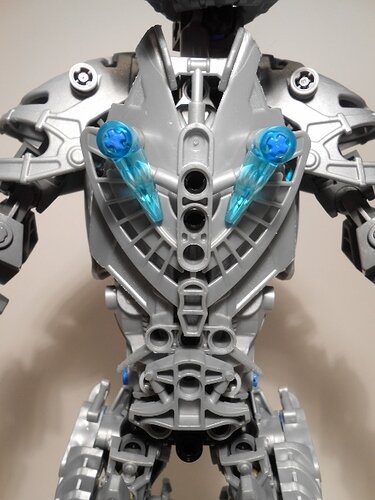 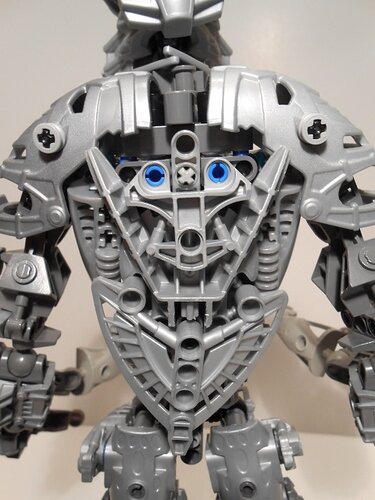 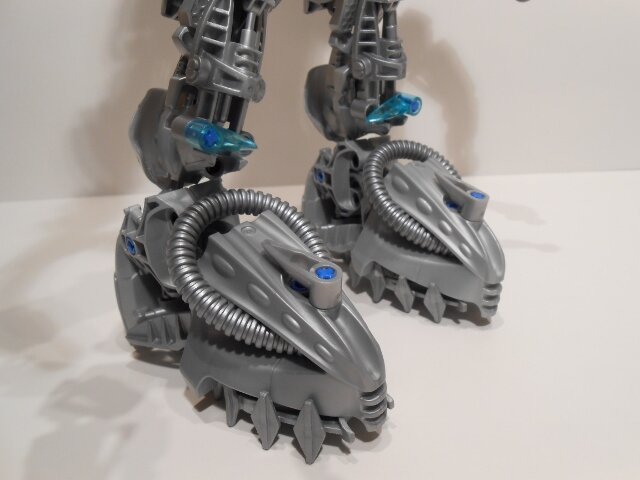 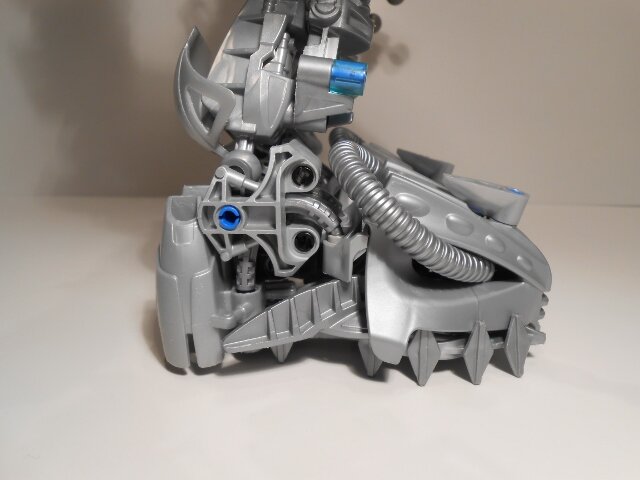 I had a hard time choosing between which headshot to use, so here are the rest of them. Along with a pic to better see all four eyes. 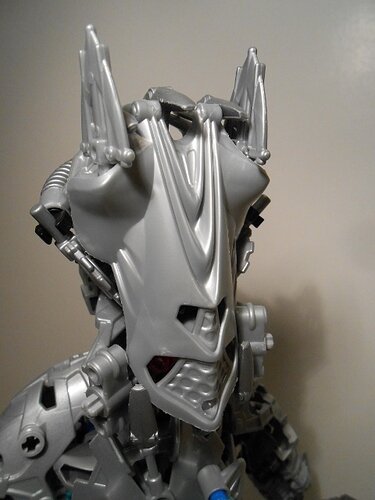 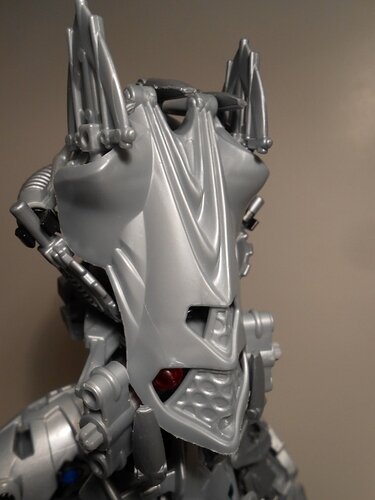 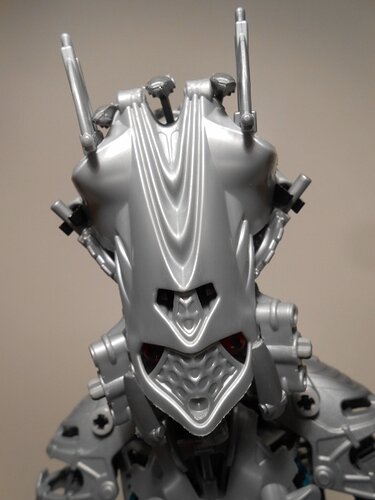 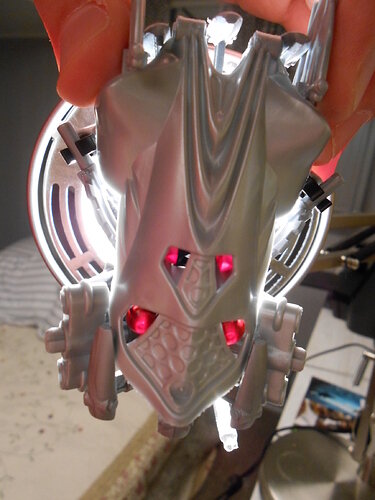 Abilities and Weapons: “Escort” comes from a race of powerful beings, ones able to wrestle and even kill Kanohi Dragons with their bare hands. Though despite his great strength, he is not particular fast and compensates for this with his suit of armor. The armor itself is made of an unknown Protodermic alloy, one far more durable than the natural Protodermic armor, but lesser than Protosteel. His sword, a massive claymore-esc weapon, is also composed of this alloy. When tested against Protosteel, it has been shown capable of damaging it, but its cuts were not as devastating as another Protosteel damaging materials. Though in “Escort’s” hands, the blade can easily cut through teams of Toa in a single blow.

The sword itself is able to heat up and rapidly vibrate to assist in cutting through beings. His armor also has additional properties, with odd crystal or Protodermic glass growing and/or forming around parts of the armor. While this glass shatters easily when struck, the shrapnel hones in on the foe who delivered such a blow and tries to embed themselves into the muscles and organics. To make matters worse, these glass shards have a mutagenic property and will transmutate the being into a glass replica. The transformation process depends on how much glass is embedded, but is generally slow, taking up to a half an hour for full transformation for Toa sized beings. That said, the armor can rapidly create glass daggers with the same mutation power, giving “Escort” a handy supply of them to use.

Outside of this equipment, he and his race are known for their teleportation powers. This is on par with the rival race of theirs, that being of Botar’s species, and as such they can teleport all across the universe. His gaze can cause beings to start feeling despair, make them start to think that fighting him will be their end. There may be other powers he and the rest of his race possesses, but those have yet to be seen.

Though unique to “Escort,” he is a form of undead; a spirit haunting his armor, having refused to die. It is similar in a sense to “Prototype” in that his remaining life force resides in the armor, but unlike “Prototype” he can still feel pain. Not as much as when he was living, but enough to be problematic. As part of this, he altered his armor so that he can rotate his torso all the around. Allowing him to spin rapidly while standing in one place or to simple catch others off guard.

Personality: Normally silent, doesn’t say much. His loyalties are unknown, even “The Shadowed One” isn’t sure if he is for anyone. Though very ruthless and cunning in battle, believing no one is innocent or neutral.

Background: Long before the Dark Hunters, “Escort” and his race were rivals of Botar’s species. They saw the Botar species as inferior to them and that they did not deserve their island, so they went to war. After devastating loses on both sides, with “Escort’s” kind losing far more, a peace treaty was eventually arranged between the two. In short, “Escort’s” kind could never come to their island and the Botars could never come to theirs. To ensure this was kept, a special barrier was created that prevented both races’s powerful teleportation from working; a block as it were.

Though “Escort” in particular was not satisfied and went in search of conquest. Eventually he found his way into the north and into the hands of “The Shadowed One,” becoming a member of the Dark Hunters. For from that day forward, he was to be one of “The Shadowed One’s” many guards, a first line of defense. For any who came to Odina and wished to see the king would first have to get past him, only by escort could they be brought to the king’s chambers. Though occasionally he was used to deliver other hunters to areas that would otherwise too dangerous to travel by means other than teleportation.

At some point while he was on the shores of Odina, a being challenge him and the Dark Hunters. “Escort” thought the fool would die easily, but to his surprise he found his own sword thrust through his back and out the chest. He fell, supposedly dead for days. By the time his organics had either rotted away or were eaten by Rahi, some other hunters thought it would be a grand idea to take his armor. Why let such good equipment go to waste? Though as they started their looting, “Escort” rose again in a rage and slaughtered them all. He had been fighting the power of the Red Star all this time and finally won, forcing himself back into his dead body.

After killing the traitorous hunters, he returned to the fortress and modified his body so that it would function properly without the organics. And instead of being so far from the fortress, “The Shadowed One” now had him at the walls, hoping to replicate how he cheated death. Needing no food, no rest, no sleep, “Escort” would stand there, eyes hidden to fool intruders and audience seekers alike that he was just a decorative suit. If they wished to see “The Shadowed One,” they needed to be escorted. A minor setback like death was not going to stop that mission.

This is really cool. The only thing I can see right off the bat is the fingers…
The old dark grey throws me off, and they’re not really articulated.
I think you could probably find some better finger joints, maybe something like Axonn has combined with these:
https://www.bricklink.com/v2/catalog/catalogitem.page?P=32174&idColor=85#T=C&C=85

Very interesting and complex! I think this is one of your best MOCs!

Not really a fan of the giant fingers, though the rest looks great

This is really cool. The only thing I can see right off the bat is the fingers…
The old dark grey throws me off, and they’re not really articulated.
I think you could probably find some better finger joints, maybe something like Axonn has combined with these:
https://www.bricklink.com/v2/catalog/catalogitem.page?P=32174&idColor=85#T=C&C=85

That was the first thing I tried when I was making the hands. However, that finger combination could not grip the sword. I went through several different kinds before landing on the option presented here, as it held it the best. Ultimately, I probably should have just used CCBS here.

Very interesting and complex! I think this is one of your best MOCs!

Thanks, though he is pretty simple, just layered almost decently.

Not really a fan of the giant fingers, though the rest looks great

Hold the same opinion on the fingers myself, I just didn’t find a good alternative.