The warlord paced, worried. The campaign had gone so well, they managed to push back the others three islands over since the help of the Dark Hunters. But he had been over ambitious and pushed too hard, now he had lost all the land. Treasury was empty and now it was only a matter of–

The warlord almost jumped at the bell’s toll and turns towards some broken piece of machinery.

It rang again, he began to shutter as it would ring out again. He walked over and picked it up, a voice rushed into his face.

“Heeelllloooooo. You are overdue. Life is the only accepted payment now.”

“It’s–it’s just arriving late! I sent it! I swear!” The warlord could hardly utter the words as he tried to spill out every excuse.

Then the voice comes behind him. “Too bad.”

In the next instance, a blade bursts through the warlord’s chest and his head is ripped from its neck. 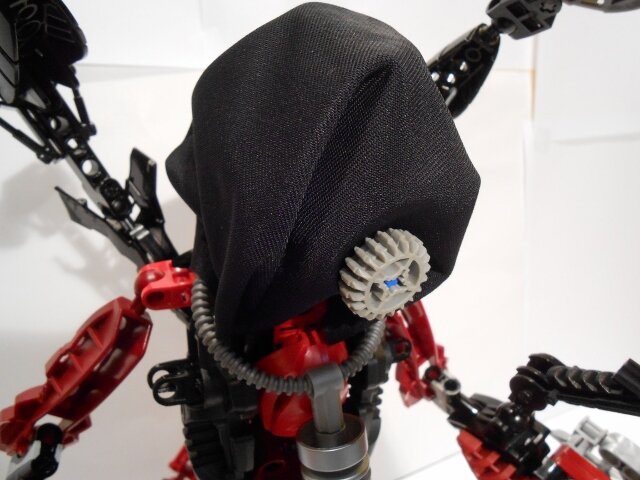 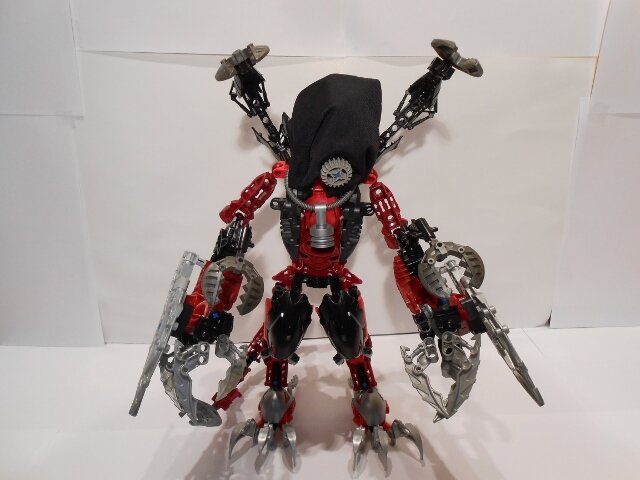 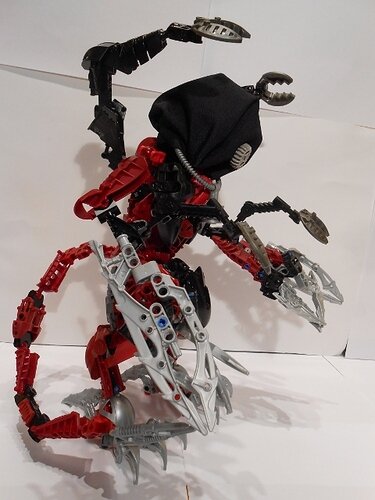 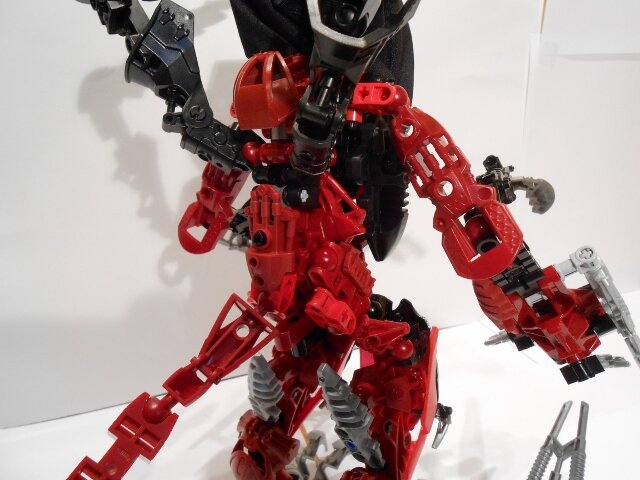 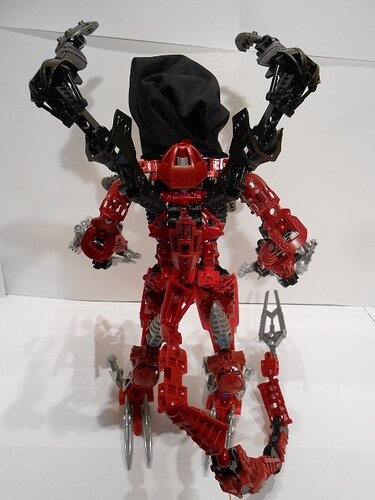 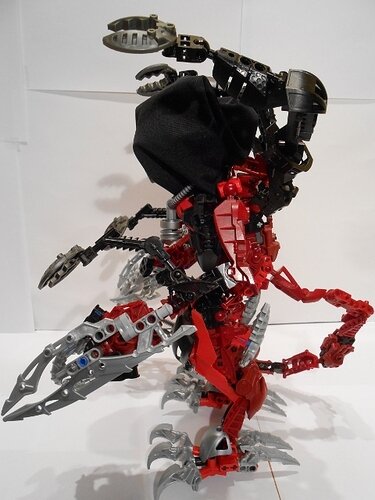 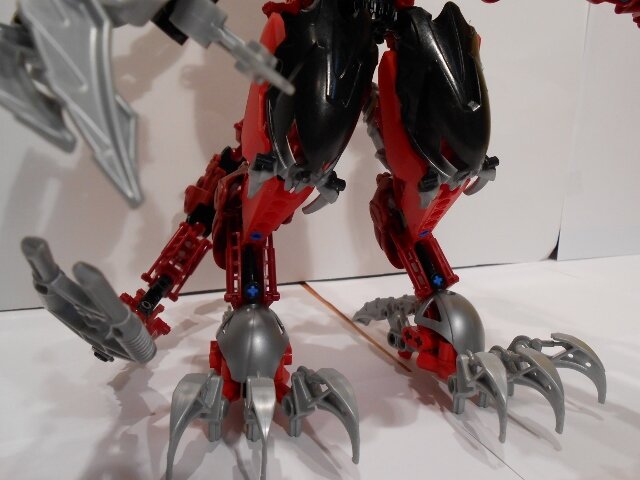 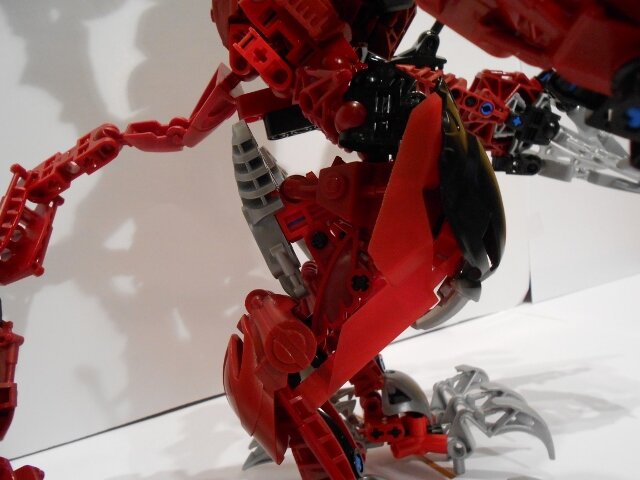 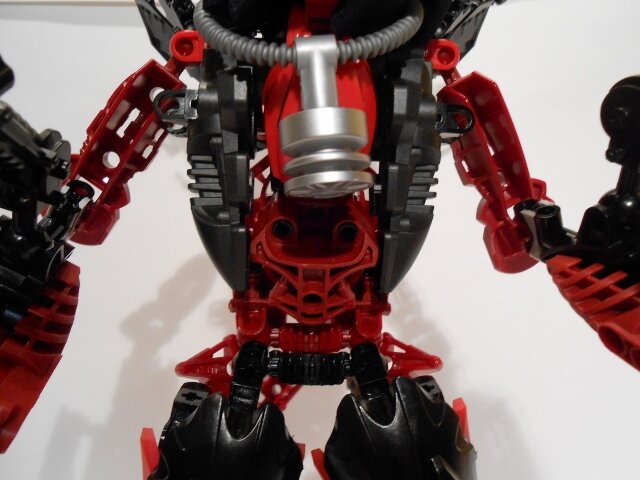 Appearance: Similar to Lurker, but with more black and two stinger tails on his arms as well as the three on his back. There is also some kind of cloth bag covering his head, with a monetary/currency symbol on it. This symbol looks different depending on who’s looking at it. There is also a hand bell hanging around his neck.

Powers and Weapons: “Toll” is naturally quick, strong, and can feel no pain. Shadows, darkness, and bad weather are attracted around and to him, making every area he’s in darker and near impossible to see in low-light conditions. The bad weather almost guarantees that there is some storm wherever he goes and increases the chance of lightning striking the area, most likely himself. “Toll” himself is immune to lightning strikes and can channel the electricity through his weapons or target. His voice emits a Fear power that fills most everyone with overwhelming terror. Can instantly learn the location of those in debt, powerful teleportation on par with Botar, and becomes stronger the more debt someone has. “Toll’s” five bladed stingers have Elasticity powers and can stretch quite a ways, has two normal blades on his arms, and sharp claws. The hand bell can manipulate noise at large distances, making targets hear a ringing noise from random objects near them. When they pick it up, the bell will transmit “Toll’s” voice. It can make sounds seem like they’re coming from different directions and makes a great blunt weapon. “Toll” also carries a small variety of traps with him, such as bear traps and trip wires.

Personality: “Toll” used to be an honest hard working soul that thought banishment wasn’t a good enough method of justice. After the changes made to him by the Dark Hunters, “Toll” has become grim and sadistic. Torturing and terrifying his targets before brutally murdering them. He will call and terrify people for free, but actual services requires payment.

Background: “Toll” was once a nice and peaceful being living on the same primitive island as “Lurker.” After “Lurker” murdered someone innocent and was only banished, “Toll” couldn’t get it out of his head that justice wasn’t properly given out. So, he went looking for “Lurker.” Along the way, however, he got framed for something he didn’t do and was forced into work. From this job he learned how to be an accountant, a skill he would later use to join the Dark Hunters when he learned that’s where “Lurker” had gone. “Toll” was a competent treasurer and accountant for the Dark Hunters for quite some time, but soon the other Dark Hunters got tired of him ordering them around to collect debts. So, they ganged up on the poor fellow and changed him into his current state to go get the debtors himself. They would later regret this when he came for them, as they held out some of the loot from their missions. After this, “Toll” would continue keeping track of the treasury and take down debtors.

Designer’s Notes: Alright, I’ll admit, while design this one, it was controversial among myself. “Toll” is one of several Dark Hunters I recreated for an RP, one that heavily encouraged the use of canon races. Both Dark Hunters and the Order of Mata Nui have plenty of races to play with, so making a new one isn’t really required, one can still have fun with the variety available.

The issue comes in designing the MOC. Because the original model, “Lurker,” is a fan design, it brings up the issue of MOC stealing. Unlike Toa, Makuta, or other races, we’ve seen plenty of various different designs and ways they can look. But “Lurker?” As with many Dark Hunters, we only have one example of the race. So how far should one stray from the design to still be clearly a member of that race and how close is too close to constitute stealing? I’m not sure and it has been driving me crazy while building “Toll.”

So please let me know if you think. Did I change the design enough, should I have changed more, etc.

Aside from that, the head covering is supposed to like, as described earlier, much more like a money bag. Think Thomas Nast’s depiction of William M. Tweed. Not the best attempt, but I’m not sure how to do it better. Definitely could use some suggestions on improvements for that portion.

The hood alone is distinctive enough to distinguish the aesthetic of Toll from Lurker. The original Lurker MOC gives off much more of a brawler vibe whereas this is certainly more sinister.

Very unique take on a Dark Hunter! I love it!

EDIT: This would be a good entry for a Dark Hunters MOC project!

The hood alone is distinctive enough to distinguish the aesthetic of Toll from Lurker. The original Lurker MOC gives off much more of a brawler vibe whereas this is certainly more sinister.

Now that is another debate. For me, yes, different masks and weapons are enough to distinguish the “clone” sets from each other, but in the end they’re still a clone.

Very unique take on a Dark Hunter! I love it!

EDIT: This would be a good entry for a Dark Hunters MOC project!

My only gripes are that the Bell could be played up a little more (looks like a cat color) and the hood held in place by the gear looks… off. Other than that good work. I love seeing G1 style Mocs.

My only gripes are that the Bell could be played up a little more (looks like a cat color) and the hood held in place by the gear looks… off. Other than that good work. I love seeing G1 style Mocs.

Well, the bell was always small in my mind, like most hand bells. Or rather, the most commonly associated hand bells such as ones rung around Christmas donations. They’re tiny little things.

As for the gear, it’s supposed to represent the widget. 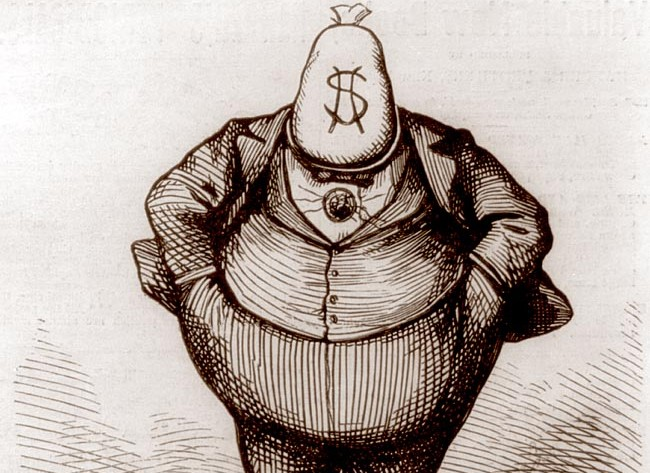 Like I said, the goal was to try and replicate this for the head, but with the Bionicle currency of widgets. Not the best, but I’m not entirely sure how to make it better.

While I like what y’all were going for, it might have been better just to leave out the widget. Or make a Bell with a widget knocker.

It looks good, except for the head, which just looks wonky.

The backstory is cool though. it weminds me of John Donne’s sermon

For whom the bell tolls

It tolls for thee