To be forgotten is one thing, to be actively erased is a whole other ordeal. And this Vortixx Dark Hunter is one who was deleted from time. 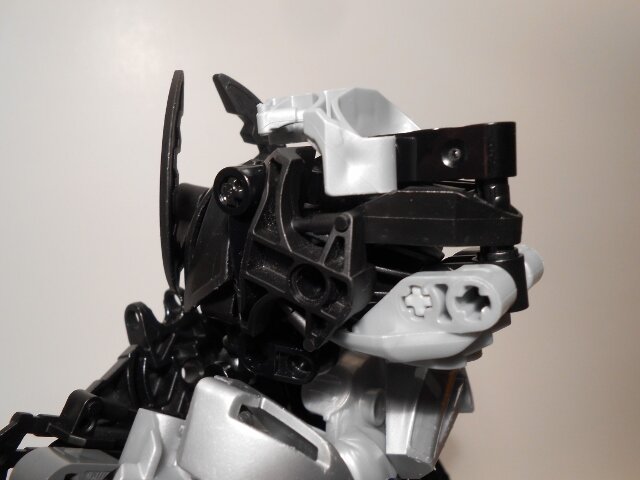 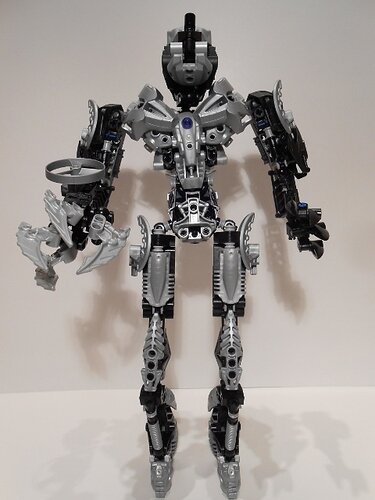 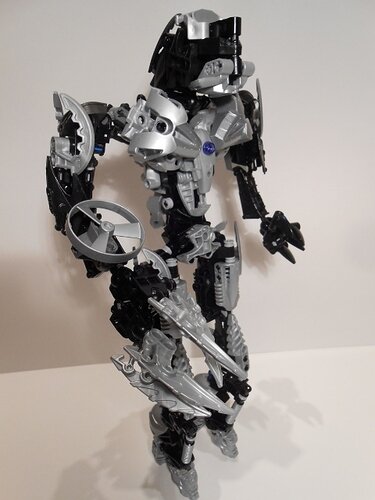 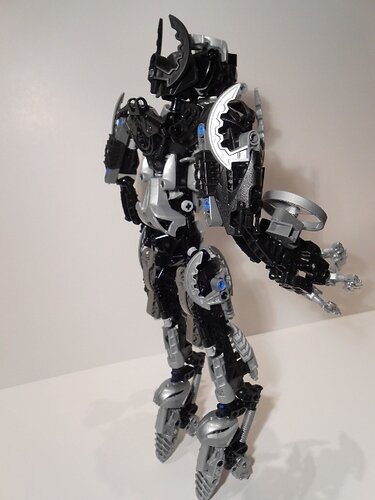 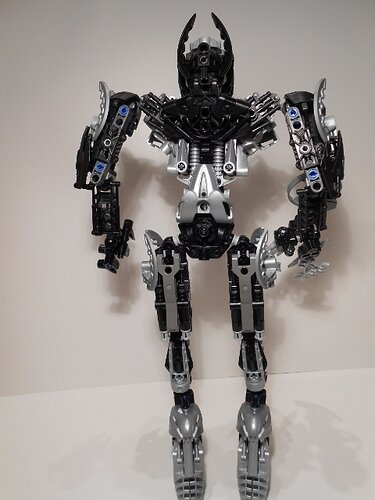 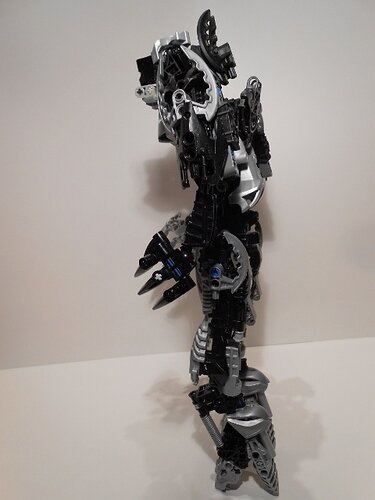 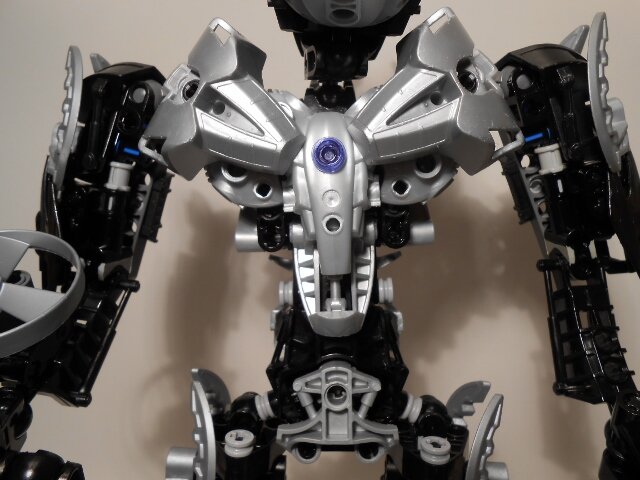 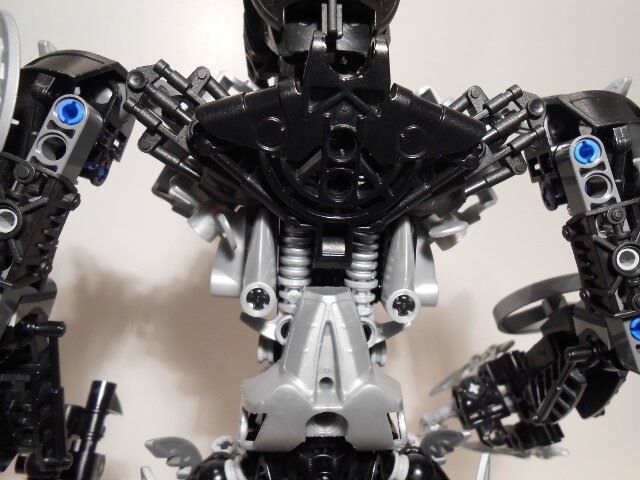 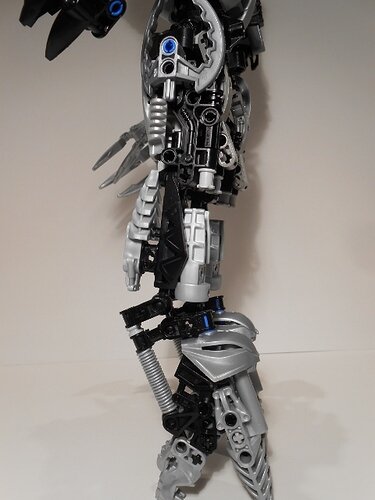 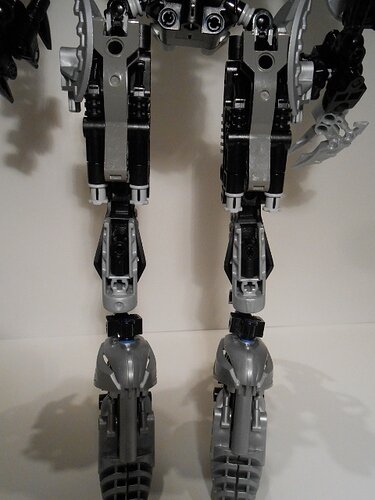 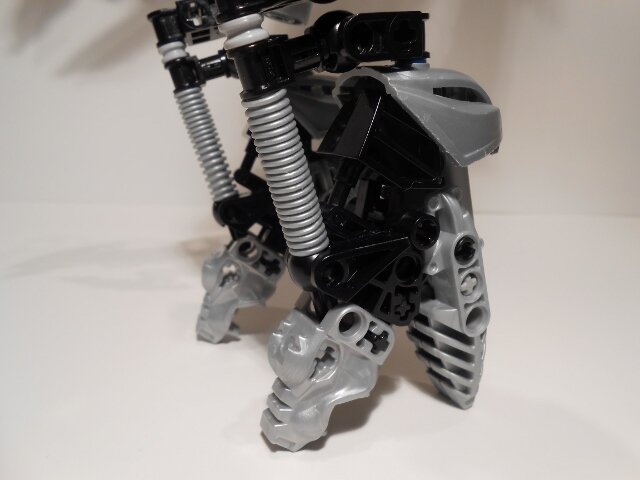 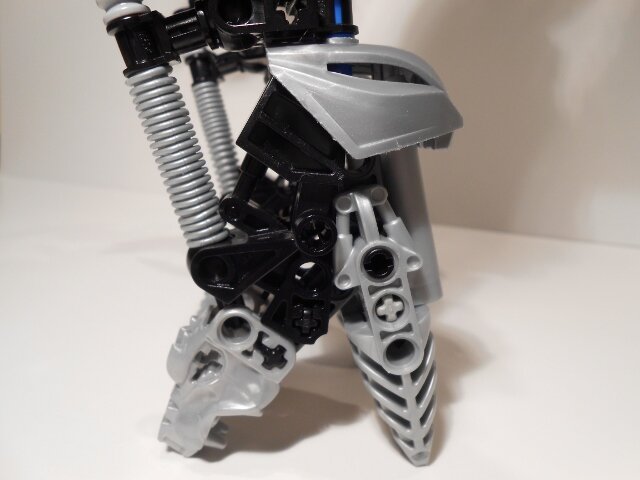 She’s surprisingly stable, so I attempted to have a walking pose. But as can probably be guessed, I am pretty bad at trying to pose MOCs. 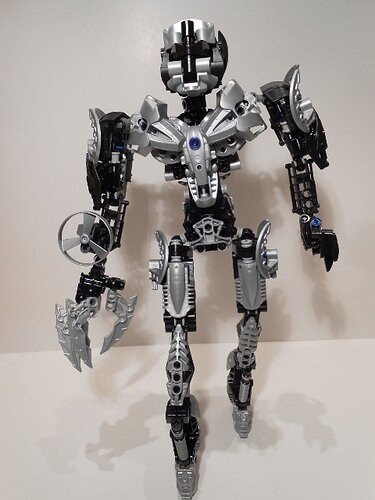 Powers and Weapons: Unusual for a Vortixx, “Ignominious” wears a mask and, although distorted, still able to use its power. While its power is known to her alone, it does operate as such: as long as a being/creature is within sight, she can control one of their powers/abilities and/or natural traits. It does require constant sight, once the being moves out of sight that control also is lost. In addition, she has managed to tap into the Kanohi’s trait to increase her own physical strength, making her much stronger than other Vortixx.

“Ignominious” has a mechanical Rhotuka launcher on her right forearm which fires spinners with an odd power. It is a form of both a time Stasis and Paralysis. It is not fully understood how it works, but has been described this way. The spinners cause the target to become immobile, being physically frozen in time; or at least unable to move themselves as other beings and objects can push them over or move them however they like. They are still full conscious and aware of what’s going on, but unable to react. Most importantly, they can still feel pain, and it seems “Ignominious” relishes in their silent screams as she operates.

Her right hand’s fingers are far longer and sharper than most Vortixx, allowing her to hold large amounts of mini-Zamor Spheres to throw at enemies. She keeps the mini-Zamor Spheres in the utility belt (not depicted) she wears and are usually filled with knock out gas, but it can vary. There are also different tools in the belt as well, such as small knives.

Aside from this, “Ignominious” is also very skilled at rebuilding and repairing beings. Able to help beings recover from the brink of death and, for a price, even make them more powerful. Be it a stronger physical form or giving them new powers. She is also just as skill in torturing, knowing just what areas to press and break.

Personality: “Ignominious” appears less egoistical than other Vortixx, but it’s truly hard to say as she may just be coaxing others for her experiments. At the very least, her ego is not so great as to hinder her from stooping low if it means she’ll achieve her goals. But as ever with a Vortixx, she is treacherous and mad with a hunger for power; going so far as to experiment on herself as need be. Obsessed with discovering how to create and alter powers, few things in this universe will stop her to learn more in how it all works.

Background: The problem with “Ignominious” is that no-one knows anything about her; there just simply is no trace. It is known that she is a Vortixx, perhaps even a high ranking member of that society at one time, but something happened. Something that stripped her of rank, mutilated her face, banished her from the island, and erased all memory of her. The Dark Hunters attempted to send her to Xia on a mission, but it seemed that even the universe itself would not let her go near that island. And when other Vortixx came to the Dark Hunters, “Ignominious” might as well have been invisible, for even in their thoughts they did not acknowledge she existed.

To make matters even more frustrating for the Dark Hunters, “Devastator” of all beings claims to know her! According to his tales, she showed up on the island of Karzahni one day in a boat typically reserved for Matoran needing repair. The island’s tyrant decided not to kill her and instead put her to work. When it was shown that she was far better at repairing Matoran than he, the tyrant tried to kill her, but escaped his grasp. None are sure if the story is true, but he does spend an unusual amount of time with her, raising suspicion that they have some sort of deal.

Regardless of who she was or previous events of her life, she did come to join the Dark Hunters. With her skill set, it was not long until for her to climb the ranks of the organization, becoming of their primary scientists and medics. If a Dark Hunter is injured or needs repairs, chances are she’ll be the one operating on them. Or perhaps “The Shadowed One” wants some to have new abilities, she may also be the one granting them. And if someone is withholding information, she will be called to strip it from them. Aside from these, at some point she altered “The Mechanic” to be one of her medical assistants.

The body and arms ate nice, but the legs are way to skinny compared to the body.

Nice work! She has a well-written backstory, and her design is pretty good as well. My only critiques are her waist is a little too wide, and her legs seem too thin. Other than those, I can’t think of any other critiques.

Legs are too thin… but the rest looks great!

The body and arms ate nice, but the legs are way to skinny compared to the body.

Thanks. Seems thin legs have been my issue as of late. Something that shouldn’t be an issue I would think for the fellow after the one I just posted. But I figured some thinner legs here would have made it looks a bit more feminine.

Nice work! She has a well-written backstory, and her design is pretty good as well. My only critiques are her waist is a little too wide, and her legs seem too thin. Other than those, I can’t think of any other critiques.

Thanks. Though I’m not sure how well her balance would be with a smaller waist. Certainly would be a different look.

Legs are too thin… but the rest looks great!

Thanks. Though at this point, I guess I would have known everyone these days prefers some THICC legs.

Those legs look a bit thin, is it stable?

Those legs look a bit thin, is it stable?

As I state in the middle of pictures, she is surprisingly stable.