“You can’t hide from me. You shall burn for your mistake.”–“Firewall”

The Order of Mata Nui was usually good about rounding up old Hand of Artakha members and special guardians of the Great Beings. These creations were so powerful that, in the wrong hands or mindset, could upset the universe as they knew it. But sometimes they slip up, sometimes these beings are forgotten, went unnoticed, or somehow unknown to them. And when that happens, their enemies gain hold of them. 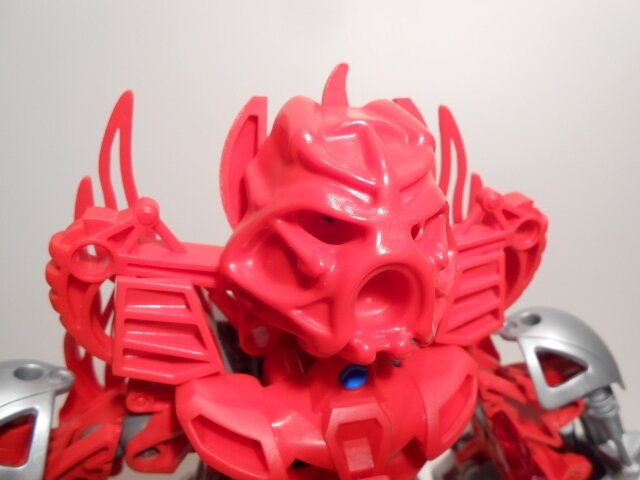 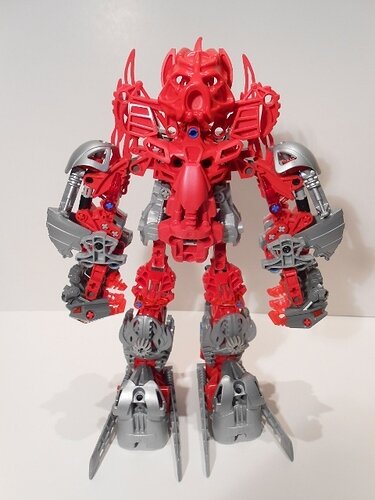 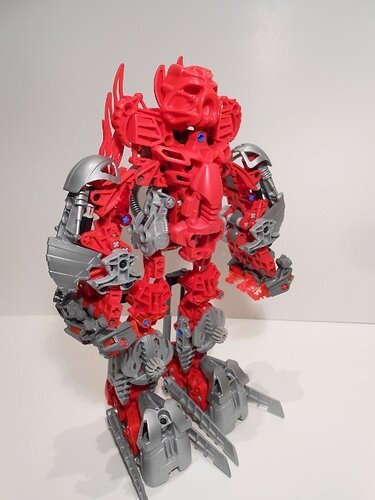 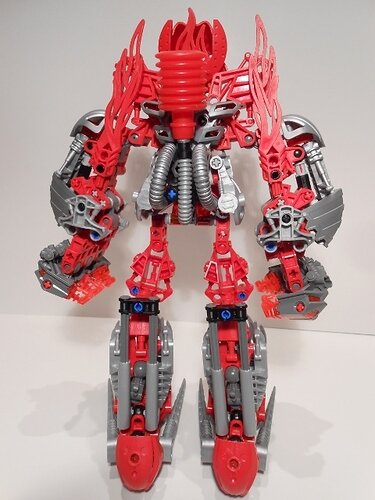 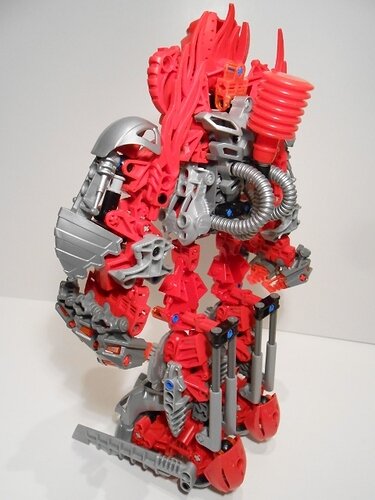 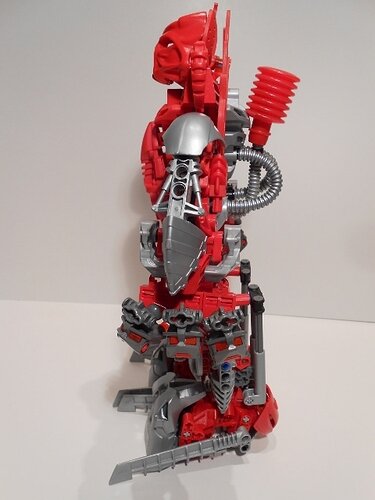 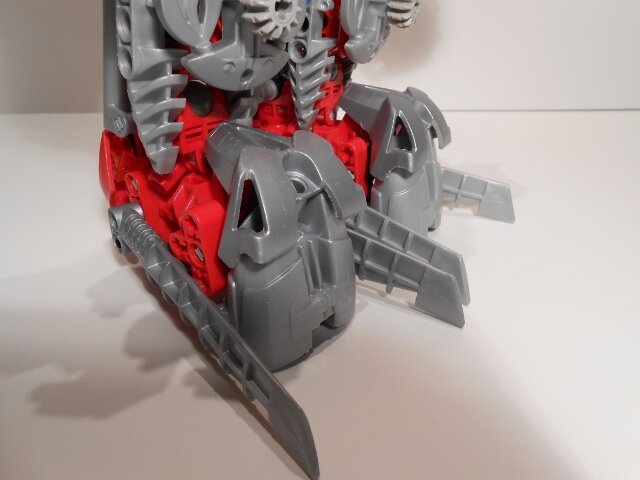 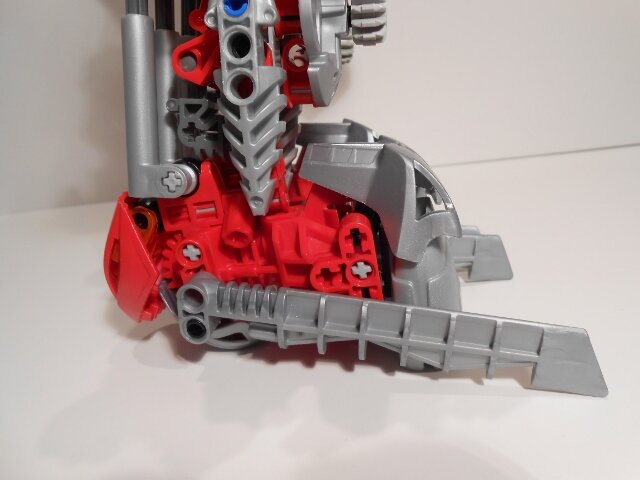 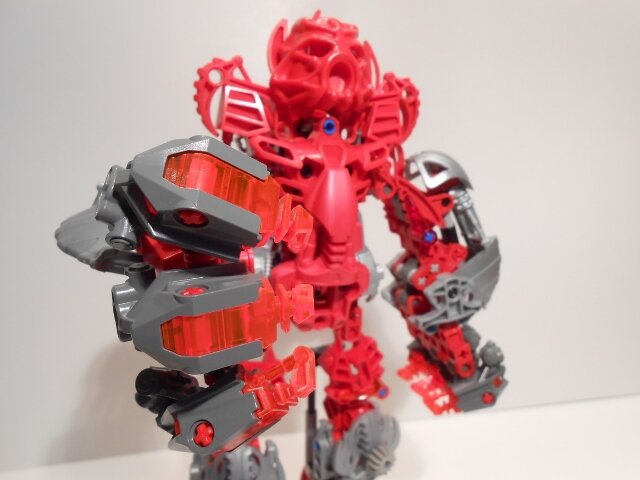 Weapons and Abilities: “Firewall” is known for one thing, that of his namesake, the creation of firewalls. Massive wall constructs composed of fire and plasma, these burning walls produce heat equivalent to the surface temperature of white dwarf stars, incinerating anything within the known Matoran Universe. He can make the wall move, chasing targets being it on land, air, or sea. While he can create and manipulate multiple walls, he typically only uses one at a time.

The creation of these firewalls, while unique to him, is derived from his elemental powers of Fire and Plasma. Though he lacks the ability to create and control either the two elements on their own, he has a great mastery over the combination. Such as with his firewalls, in which he keeps the heat from escaping from the wall itself to prevent everything from instant combustion.The only things that will incarcerate is that which touches or goes through the wall. He uses similar temperature control for other Fire-Plasma attacks, such as Fire-Plasma orbs/miniature stars he occasionally uses.

Despite this control of temperature, “Firewall” himself is incredibly hot, radiating enough heat to melt the natural protodermic armor of any brings near him. Similarly, he is extremely heat resistant, even above the Makuta power, and is strangely immune to lasers as well. However, it appears that he would not survive being struck by his own firewall. Some beings have attempted to lead the wall back to “Firewall” to catch him in it, but he just manipulates it to split and go around him.

Aside from his Fire-Plasma and heat related abilities, he is also able to purge computers and machines of foreign control and viruses. For example, his power allows him to free machinery from the control of a being using the Mask of Biomechanics. Rahi in particular die near instantaneously from his strikes. Though this power is not merely limited to viruses, as he can see, grab, and purge spirits and astral projections as well (Iden-users, Makuta, etc.). Purging spirits does not merely remove them from whatever they’re possessing (if they are in possession of something), but incinerates them entirely. Spirit, mind, and even where their true body is located burned to ash.

Physically, “Firewall” is vastly powerful and durable, somewhere about on par with Axonn’s race. Even without the extreme heat radiating in his claws, he can slash through Toa with a single strike. Although he wears a Kanohi, he is unable to use it. Whether it possess a power, and what the power would be, is unknown. He requires no rest, food, or air to survive.

Personality: His thoughts and feelings are rarely known due to his silence. It would seem he cares little for anything else other than completing his current mission. Though one thing is for certain, he is always calm and at peace, not wavered by whatever challenge lies before him. He’ll just stand there, arms crossed, as his firewall goes to consume all enemies. And if he speaks, it is to spirits others likely can’t see.

Background: In the times before, “Firewall” was created by the Great Beings as one of the Core Processor’s guardians. Should anyone attempt to possess the robot, the guardian would incinerate it. His existence was kept secret to all, except for the soon to be sleeping Glatorian pilots and the replaced Tren Krom. And for years, he remained guarding the Core Processor until the Great Disruption. The damage caused by the disruption came to affect the processor and eventually to “Firewall” himself. In desperate need of repairs, he began making his way out to get aid.

By the time he was able to navigate through all the broken machinery and death traps, it was near the time of the Toa-Dark Hunter War. His body severely deteriorated, mind was all but gone, purely moving forward out of what will remained. His mostly dead body was found just outside Metru Nui, being pulled out into the sea. The Dark Hunters that found him almost scrapped him for potential parts until they realized he was still alive, if only barely. They took him back to Odina, repairing and nursing him back to health. A process that took until the end of the war before he was operational again. His memories and purposes was lost, so with nothing else left to him, he became a member of the Dark Hunters.

Though most unfortunate for “The Shadowed One,” he was sent on a mission under false pretenses for the Makuta. The true mission being the assassination of a fellow Dark Hunter, “Shadow Stealer.” The fiery brute possessed as much a threat to the Makuta as did “Shadow Stealer,” so the death of one, or even both in the conflict, would be beneficial. Neither of the two hunters have been seen since.

Very nice. I like the use of the Metru heads as fingers, though that red pump on the back is kinda odd looking.

Its an… interesting build

Very nice. I like the use of the Metru heads as fingers, though that red pump on the back is kinda odd looking.

Thanks. As for the red pump, maybe it’s just telling you where his weak point is!

Its an… interesting build

Interesting in what way, exactly?

Like every video game villain ever. (Looking at OOT Gannondorf)

His design and proportions are pretty off kilter.

One small criticism, the use of red in his head and upper torso is a bit much. It makes it look like it’s all one part, a bit of color variation (maybe with some metru red) would help a lot. All in all the mic is pretty nice! The tahu nuva mask doesn’t look out of place here, in my experience it usually isn’t great for moccing.