“Disarm” is one of my oldest MOCs, dated back to around late 2010 to somewhere in 2011. Back in those days, I didn’t have many parts for MOCing (because I’m a set collector first), so he wasn’t all that great…As you’ll eventually see for yourselves. I didn’t get around to taking pictures of him until 2014 as that’s when I received a camera. Soon after he was dismantled. After all these years, I thought it was about time to rebuild the old friend into a more respectable form.

That and I’m on a mission to have actual MOCs for all my Dark Hunter characters, so no better time for a revamp. Anyways, without further to do, here is “Disarm.” 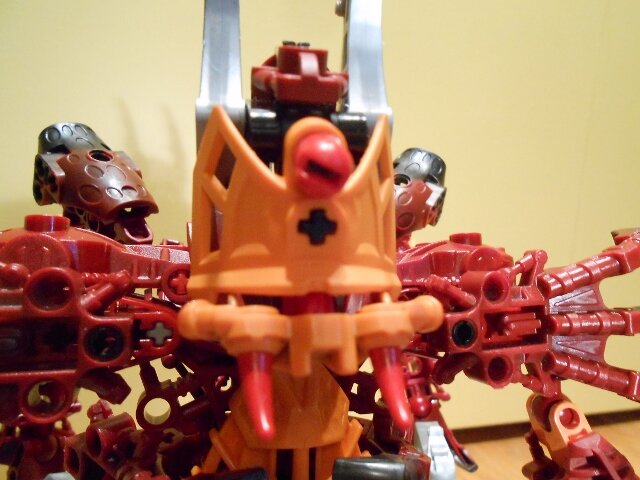 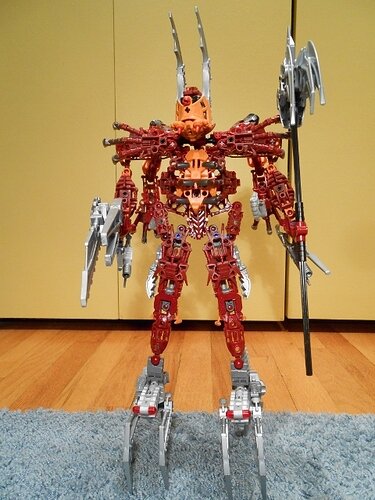 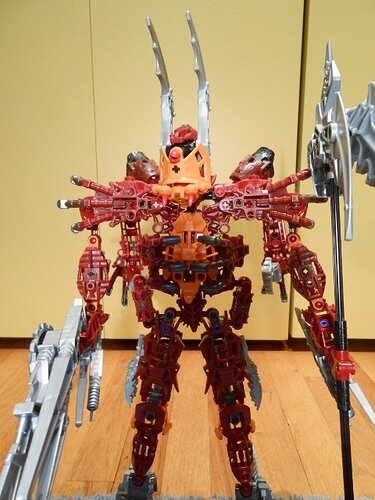 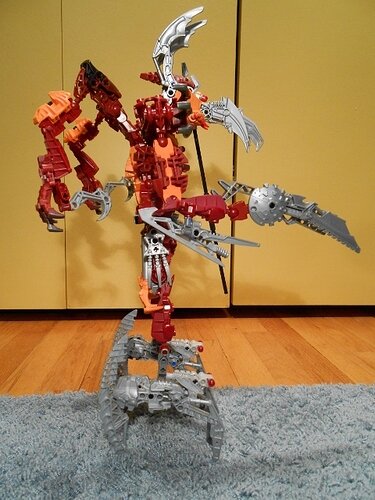 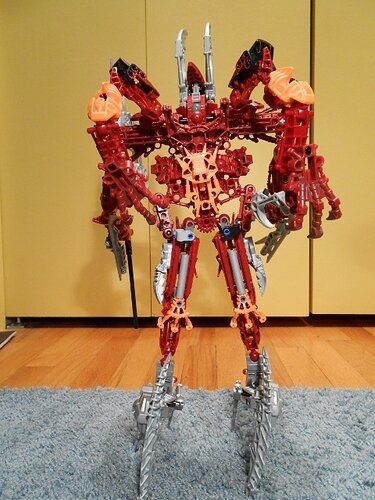 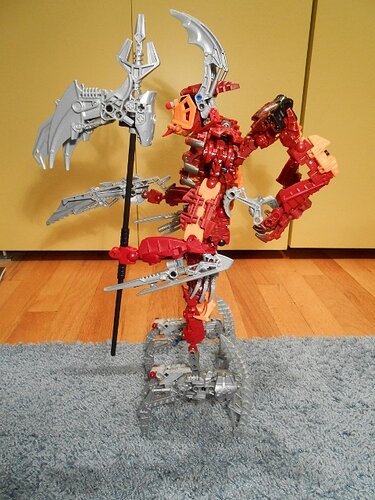 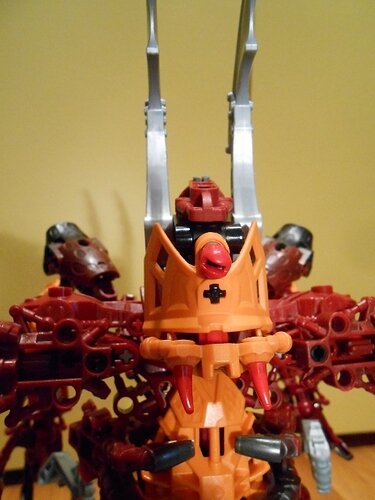 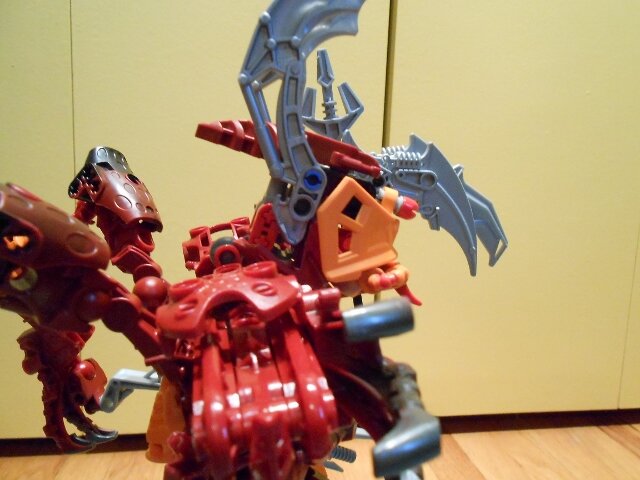 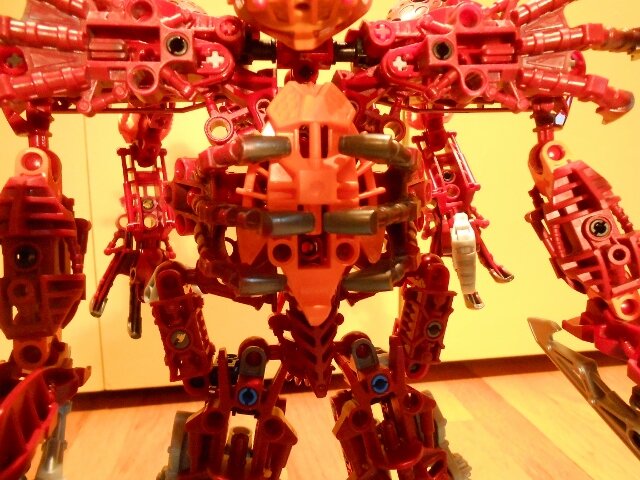 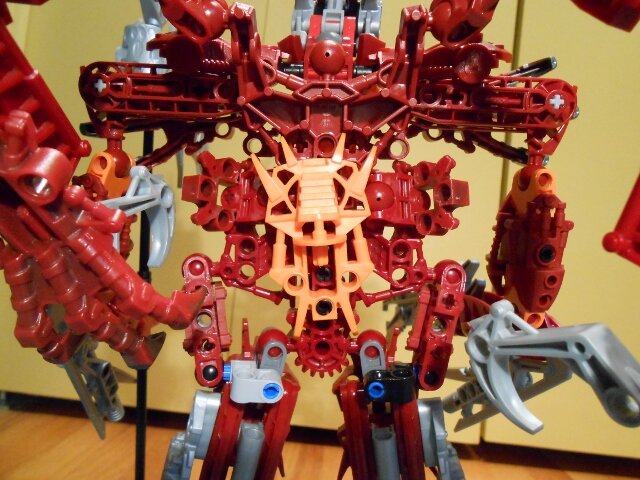 *Note: Yes, I know those pieces are in two different colors. It turned out they were the only two I have in my entire collection. Though I didn’t notice the ball piece coming out there until this photo. Whoops. 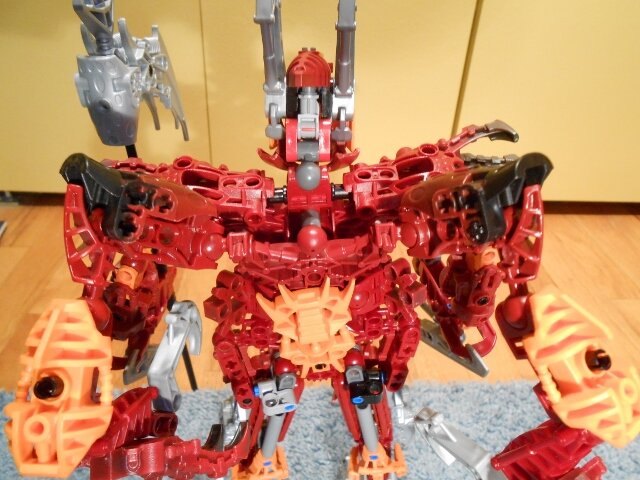 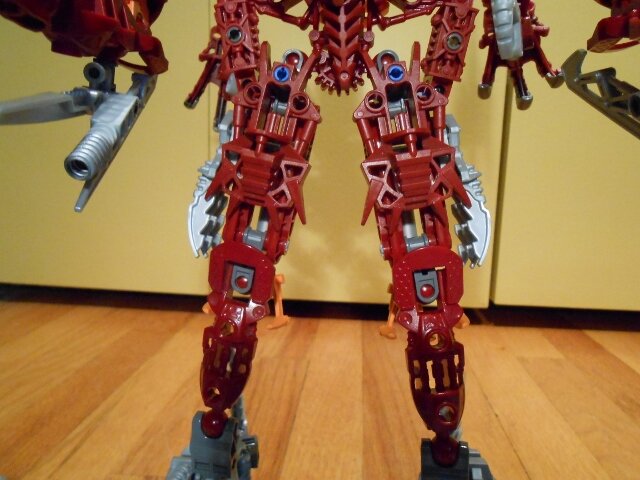 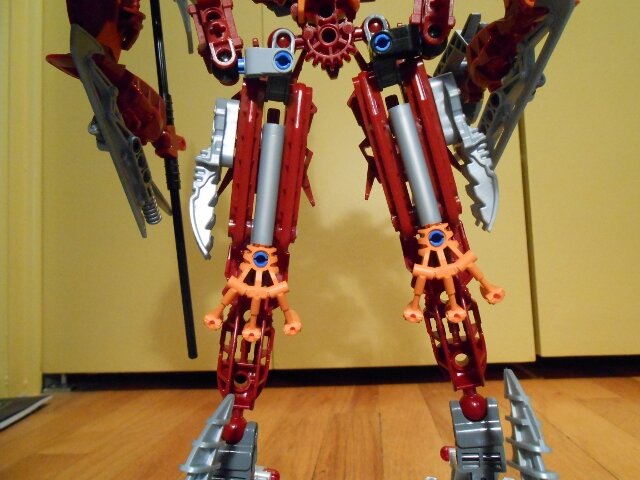 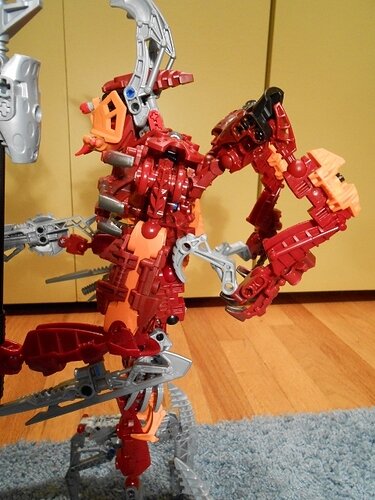 Feet: What are you talking about? He’s totally not wearing Rahi slippers. Totally. 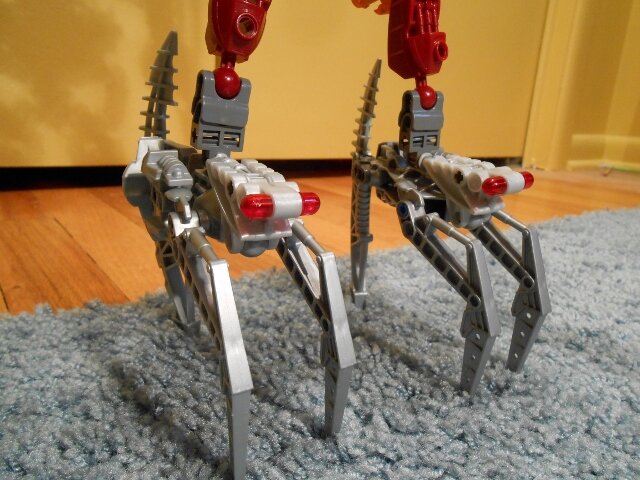 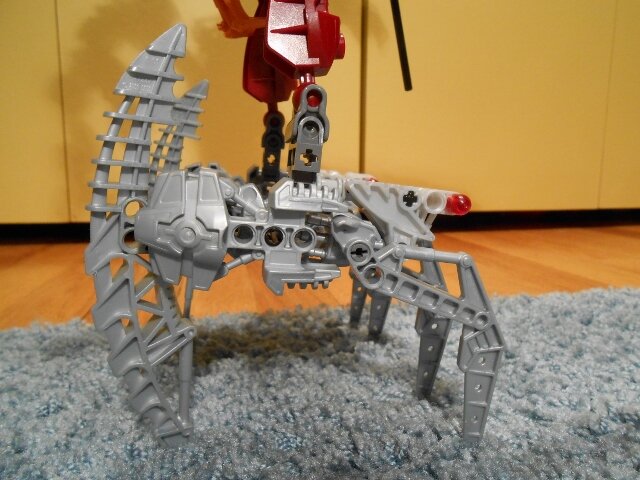 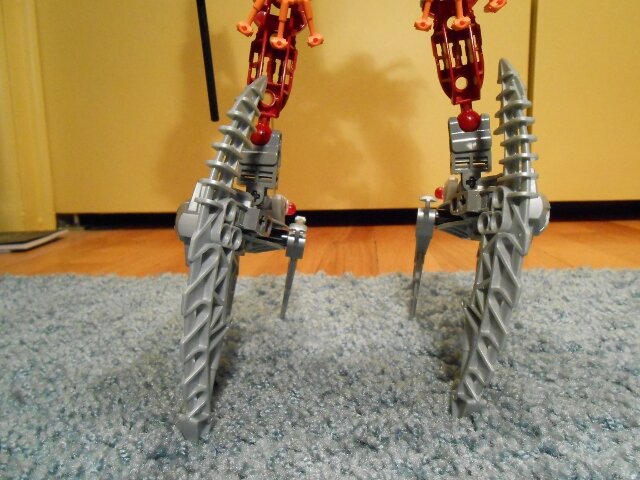 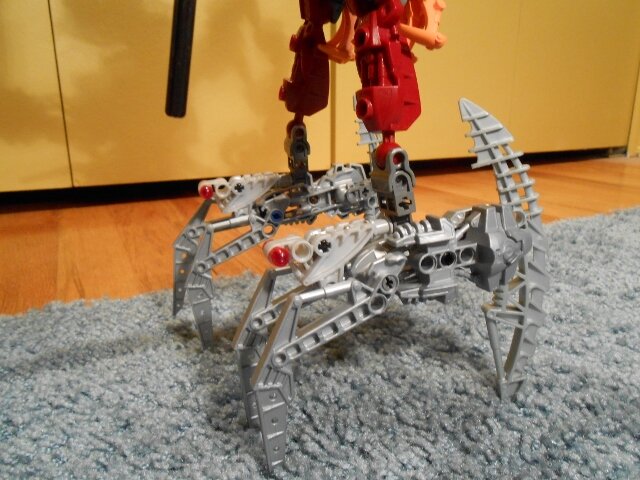 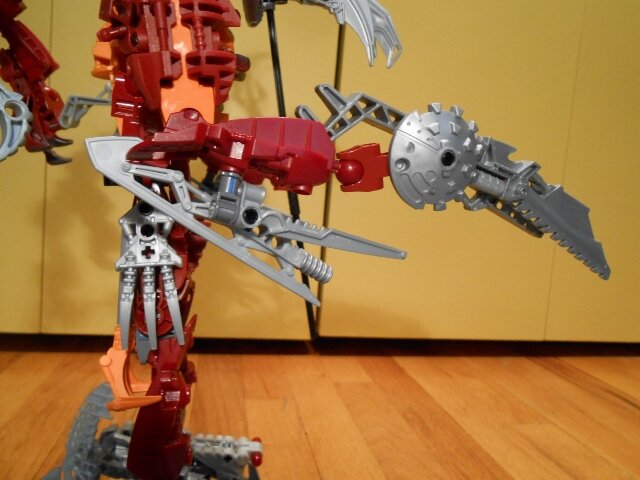 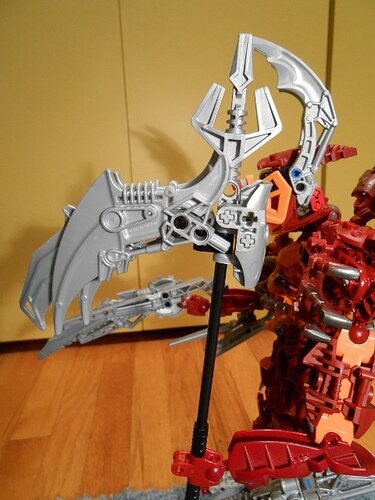 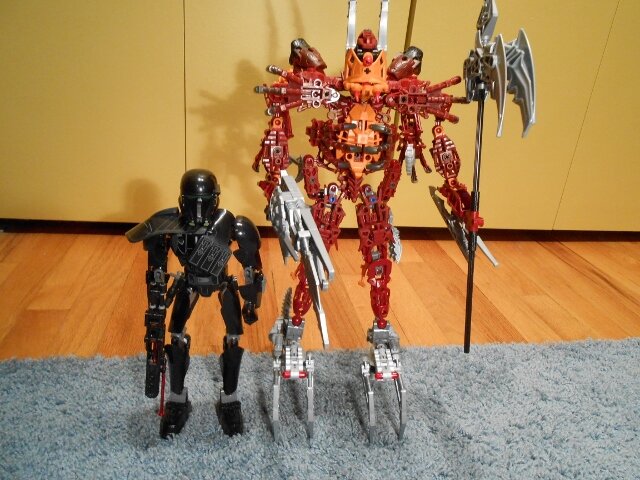 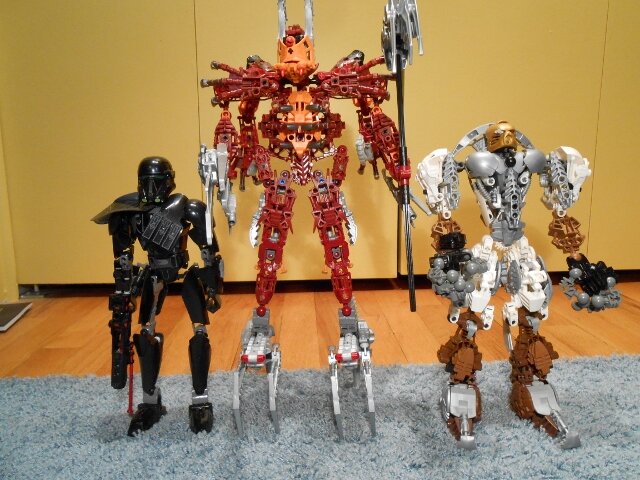 Old Version: Now for the nightmares. 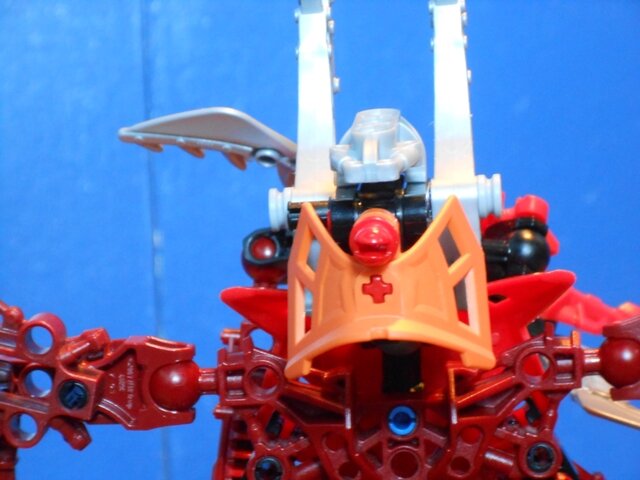 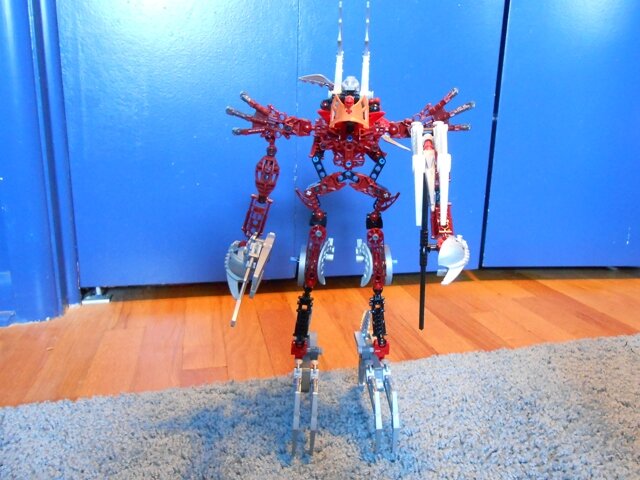 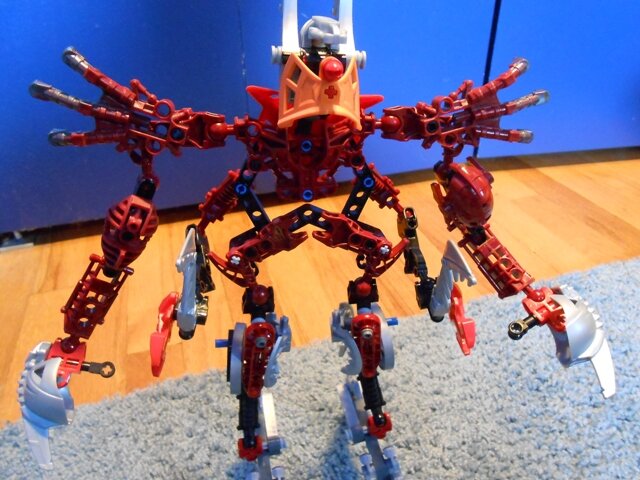 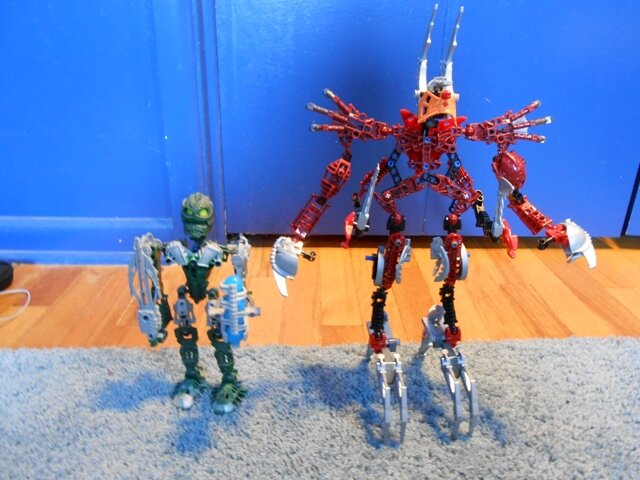 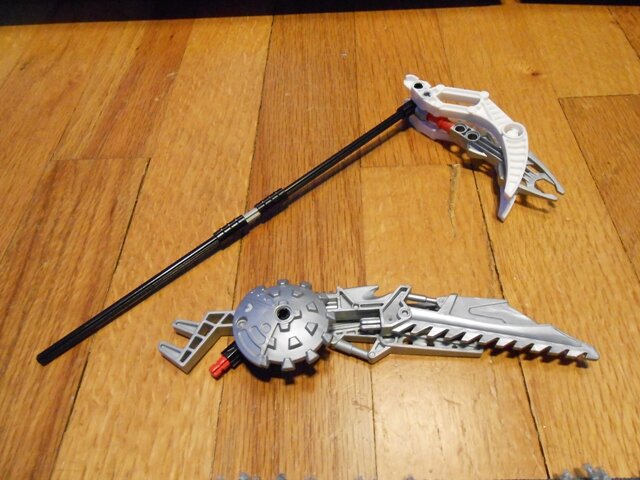 Powers and Weapons: “Disarm” carries a scythe weapon that can rip weapons away from other beings’s grasps or their resting places through a telekinesis-magnetism combination. The weapons drawn to him are then slashes to pieces with his scythe.
His secondary weapon is a strange energy rifle, the beam of grey energy was known to be “sharp” enough to even pierce through Protosteel weaponry. It had a secondary setting that allow it to fire a blue draining energy, storing the stolen power as future ammunition.
Aside from this, his only other weapons are natural claws and some hooked daggers. Psychically several times stronger than a Toa and an excellent climber. His antennas can pick up telepathy communication, allowing him to listen into secret conversations.

Personality: “Disarm” likes to use his reputation as a weapon. Like many Dark Hunters, he has an affinity for collecting trophies from his missions. Though more unique to him, he was known for his love of insects, devouring entire hives of Nui-Rama. Despite his feasting, his has a strong hatred for the Visorak, known to be the only insect he does not enjoy.

Background: “Disarm” was recruited by “The Shadowed One” at some unknown point in time. It is thought that “Disarm” comes from the same island as “Primal” or the island of the Irnseptaods as he can speak their language. Regardless of origin, he became one of “The Shadowed One’s” many guardians, disarming would be assassins and intruders as per his namesake. Though he has been punished for destroying the weapons rather than adding the to the armory.
Aside from this, he became notorious for his feasting on insect Rahi, slowly becoming known as somewhat a cannibal as rumors spread of him eating insect like humanoids. On one particular day, he scared off Nidhiki by saying, "You look so delectable today.” 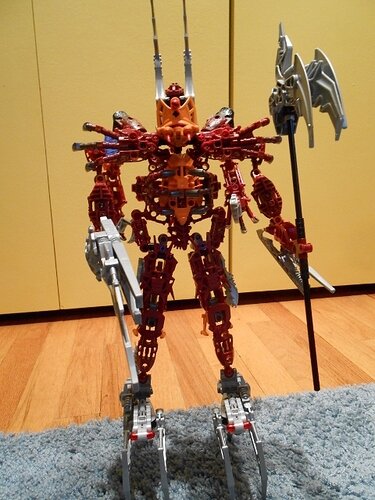 Comments and criticism are welcome. Just when you give criticism, please be as clear as possible so that I understand what you think could be better.

That is waaay better than the old one!

Alright, it has a pretty good color scheme, but a thing I don’t really like is the.usage of Hakann feet: they seem to be everywhere, and they don’t really fit in all those places.

That is waaay better than the old one!

Alright, it has a pretty good color scheme, but a thing I don’t really like is the.usage of Hakann feet: they seem to be everywhere, and they don’t really fit in all those places.

The wonders of having pieces to use, makes it night and day.

While I can sort of see your point, they are more concentrated on the torso. Two make an almost rib cage, the second on the shoulders is similar to the previous design, and the final two on the back arms are more to be shorter claws. So perhaps too many too close.

Definitely an improvement over the original, and the feet are a really cool concept. The torso could do with some improvement though - maybe consider extending a bit & the supports linking the legs and waist look a little awkward. Other than that though, it’s looking great!