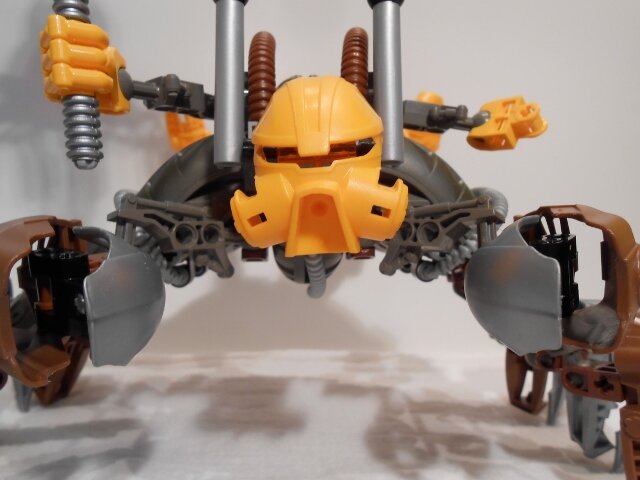 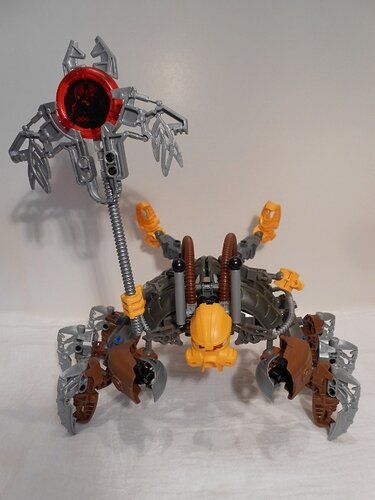 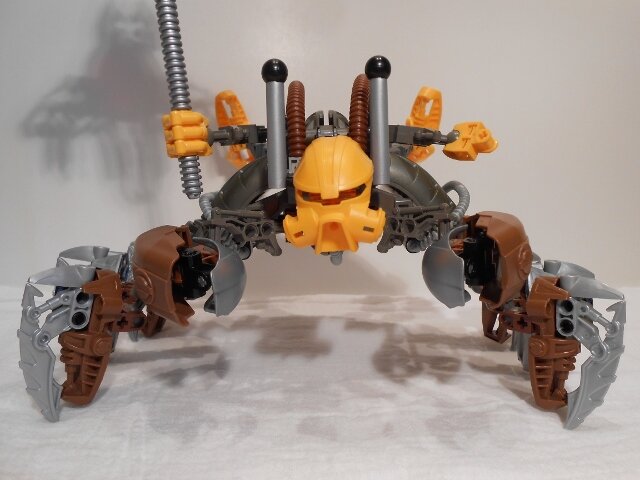 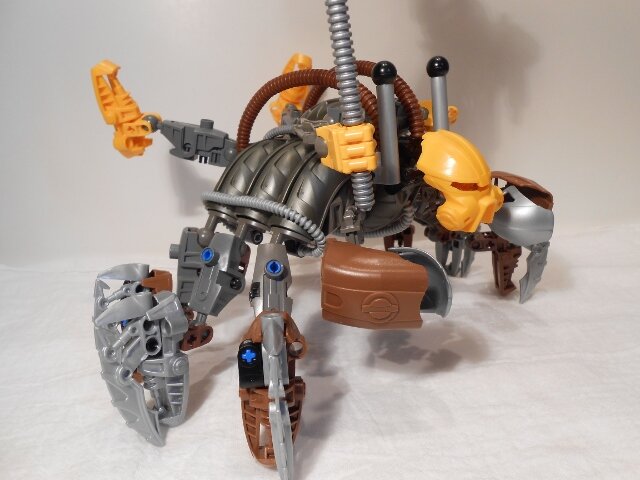 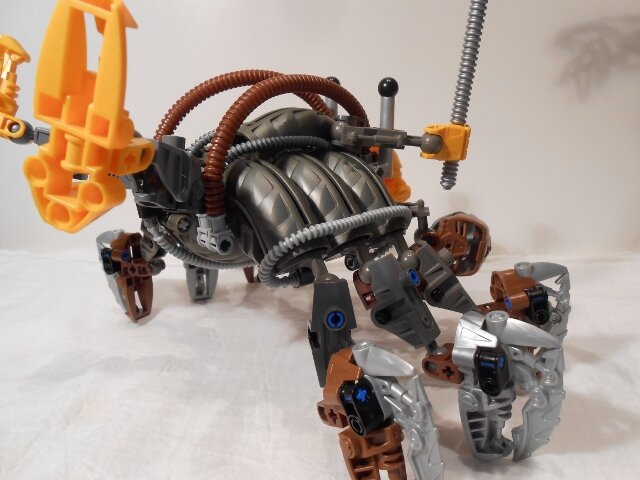 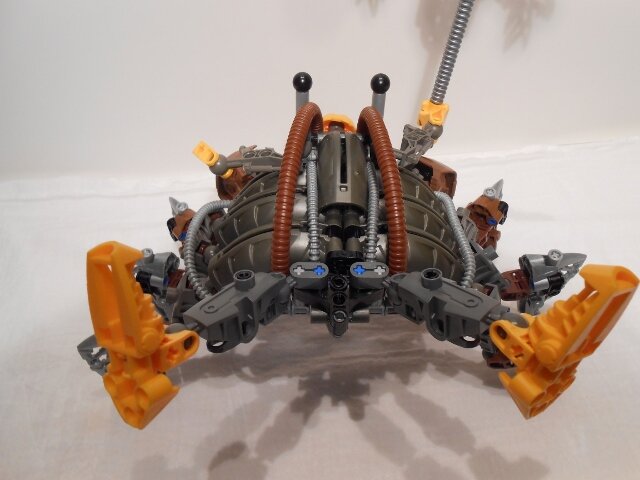 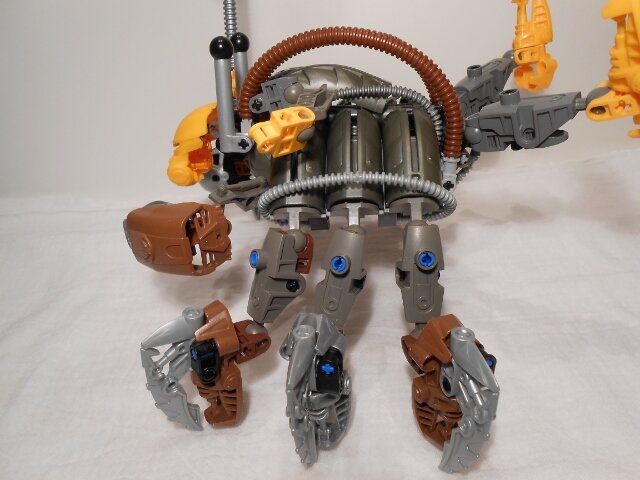 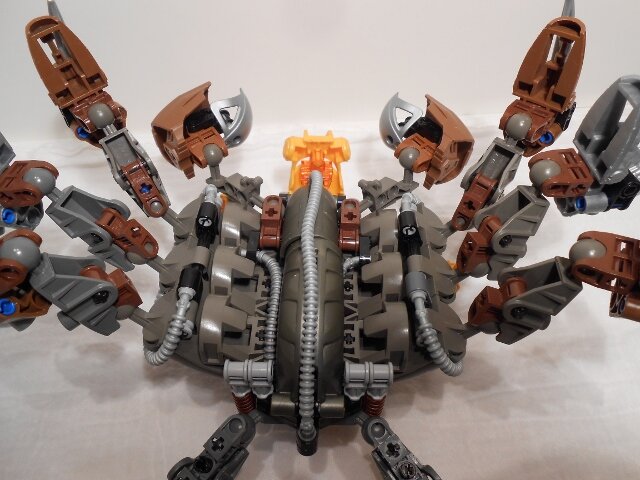 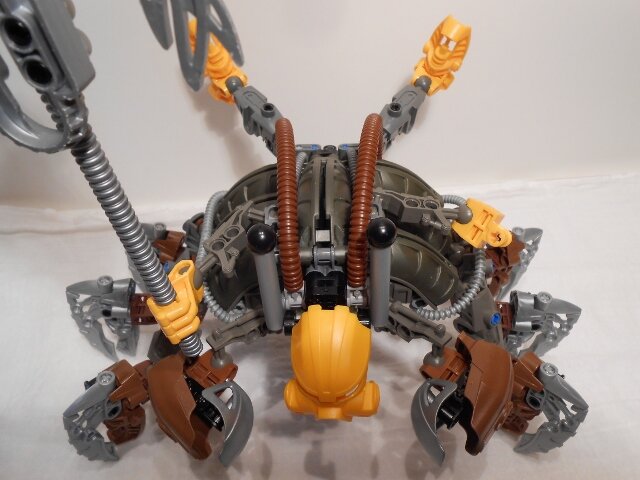 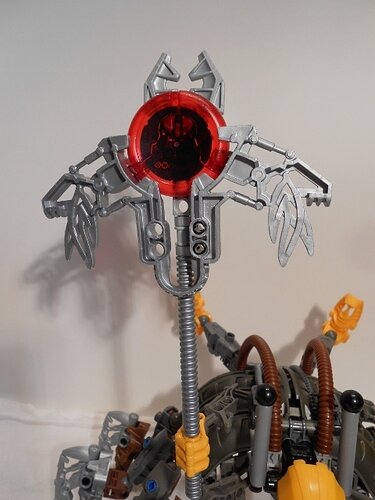 Designer’s Notes: Probably a silly thing to be proud of, given how simple it is, but I really, really love the claws. And they do function! Demonstrated here: 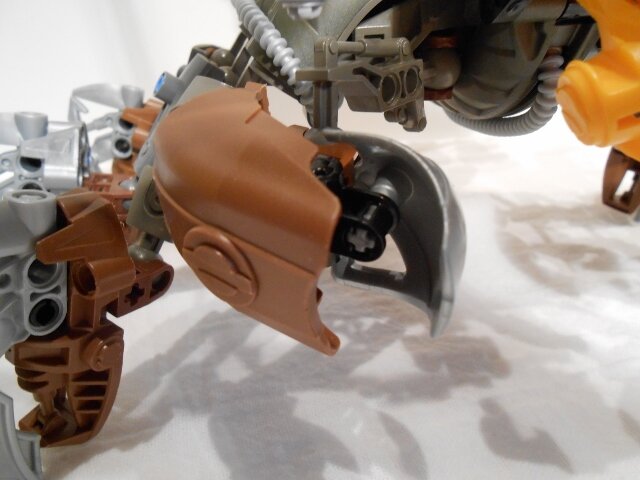 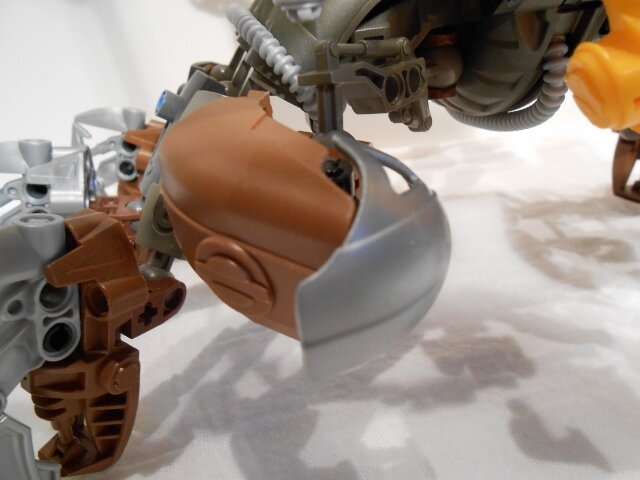 Powers and Weapons: “Herald,” despite his strangeness, is quite an agile and strong being. Able to outrace Rahi like the Taravaka and Muaka, best “Gladiator” in swiftness, and able to dig tunnels though an entire mountain range in mere days. With those shovel claws of his, he can quickly bury foes by tossing tons of dirt or slamming large chunks of earth/stone on them. Though his only true weapon is a double-headed/bladed flame ax; it can cut through boulders and sets things it cuts through on fire. If need be, the weapon can generate Kanoka disks of magma and launch them at enemies.

It is unknown if he is able to use his mask or if the mask is using him. Regardless, it constantly shines blinding light, growing brighter towards where-ever the correct direction (or person) that it seeks. Occasionally, if it considers itself in too much danger, it will release a powerful blast of energy to obliterate threats. It also tends to give “Herald” a throbbing headache whenever he is close to that which is sought.

Aside from these, he is highly resistant to burning and heat, cannot be blinded by bright lights, has night vision, and immune to the Makuta/Kraata powers of Infection and Anger.

Personality: “Herald” is best describe as lost and confused, having no idea where he’s going or why he’s going. At least, when it’s not on his main mission, though still lost even on that. At the same time, he is fully dedicated and Duty-bound to whatever task he is given. Regardless of what stands in his way, it will be moved. Foresight is also something he possesses, or rather, future sight to be more precise. A prophet of what’s the come and constant pilgrim to seek out that future, where ever it will take him.

Background: “Herald” was first discovered by “Seeker,” who mistook his shining mask for the Avohkii. The Dark Hunter had just about killed him in frustration for it, but stopped when he heard his tales of a Seventh Toa. A Toa that would seem be arriving, or, at least, should be arriving soon. And that he must find this Seventh Toa, before it is all too late.

Learning that his shining face is what is guiding him to this so-called Seventh Toa, and perhaps to the Mask of Light itself, “Seeker” let him go and tried to follow. Though it was not long until this odd creature and his mission was reported to “The Shadowed One.” And not wanting to lose a valued hunter, the creature was snatched away from “Seeker,” much to his dismay. After some…negotiations with the being, the Dark Hunters were not entire sure what to make of him.

As far as they could tell, he was not from this universe. “Annalist” was thrown into a loop in discussions with him about history and the timeline; about how none of these things happened yet, or if they would happen, or this event was wrong. Though he did feel space-time energies around the creature, however weak it had sense become. Similarly, while the being said he could not remember his name, only able to remember that he was the herald and on a mission, “Name Rater” almost could not bring himself to give him a codename. Eventually settling on just calling him by what the being thought it was, a herald.

A herald, on a mission for something, from another world. It also appeared that, perhaps at one time, “Herald” was two separate entities. It is not believed that he was fused together, as it appears more like they just eventually melded into each other. The various telepaths of the Dark Hunters can sense the remnants of two separate minds, but only unhelpful fragments could be garnered.

Regardless, what he told “The Shadowed One” was very different from what he told “Seeker.” He claimed of a war between Brotherhood and mercenaries, that two Hunters would die for the birth of the Mask of Time. And that he must be allowed to go out and find it. “The Shadowed One” initially would take such a tale as nonsense, no better than “Annalist’s” occasional blabbering, until when something surprisingly similar happened years later. Perhaps inconsistent and occasionally hard to decipher, it seemed he was able to see the future and tried to find it. Particularly anything involving significant objects of power.

Prior to that discovery however, a “deal” was made with “Herald” and he “joined” their ranks. Constantly prevented or held back from following that light of his, if not by strategic planning and other hunters, then by his own sense of Duty to finish the mission. When his heralding of events turned out to be more or less true, he was allowed to follow the light more in order to bring these items of interest back to the Dark Hunters.

I… I don’t know what to think… I just kinda looks like some demented amalgamation of Pewku and Defilak… But in a good way?

“I got fused into the same body as a fricken Usal Crab what do you think!!”

Very nice. I really like how you made those pincers!

Now this is undeniably a mess.

I believe that was the idea.

I… I don’t know what to think… I just kinda looks like some demented amalgamation of Pewku and Defilak… But in a good way?

Demented? Well, sure, he’s supposed to look a bit disturbing; one would be if you melded together with a crab monster. But I personally think the execution ended up making him very silly. Almost something like the Bionicle Apple silly.

So I’m surprised by this reaction.

“I got fused into the same body as a fricken Usal Crab what do you think!!”

Very nice. I really like how you made those pincers!

Now this is undeniably a mess.

A mess in what way? As in the build looks messy?

surprised by this reaction

I don’t mean truly demented. I may be using the word wrong. I just meant it looks like something a crazy mad scientist might make in his lab.

EDIT: yeah, I was using the word wrong. it means to have dementia.