Dark Hunters don’t use carrier pigeons, for such creatures would never survive their missions. No, they use monstrous bats to carry their word and woes, fierce and dangerous creatures. But who is it that takes care of these beasts? Manage to injure or capture one and you’ll wish you never asked. 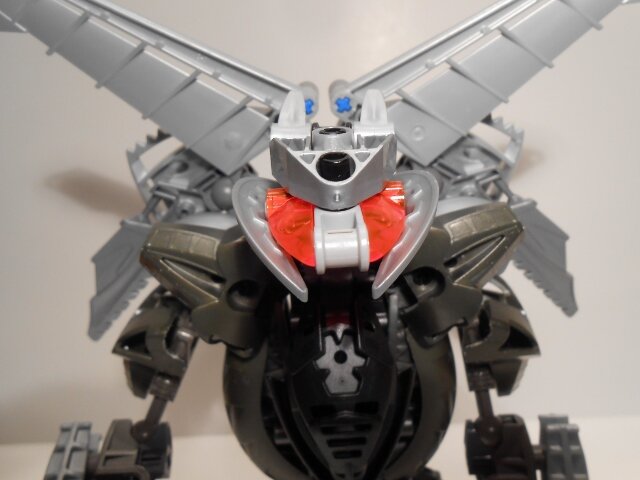 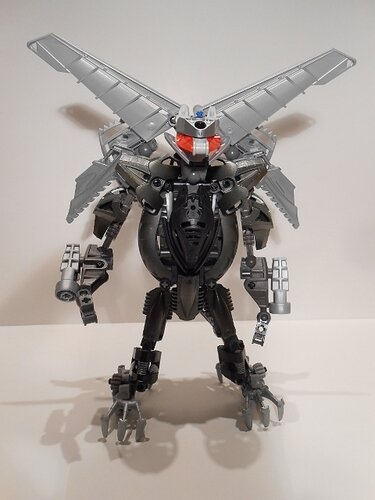 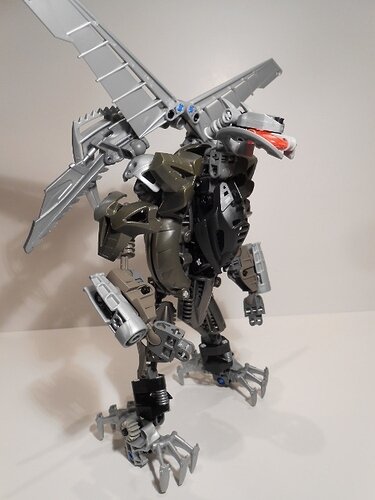 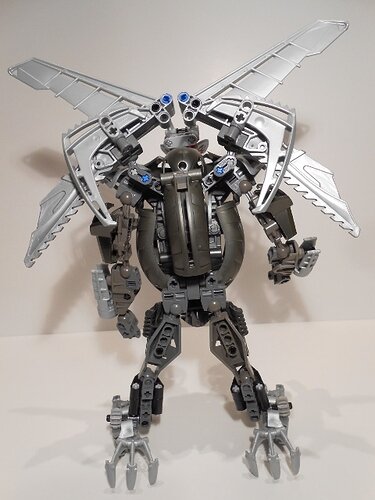 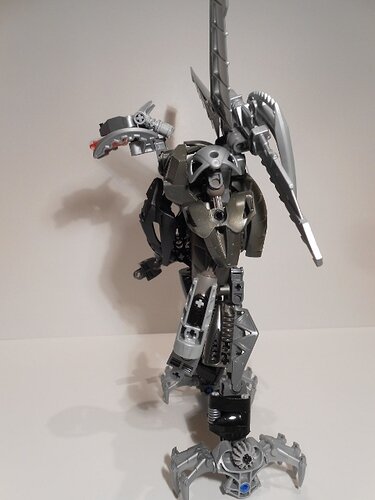 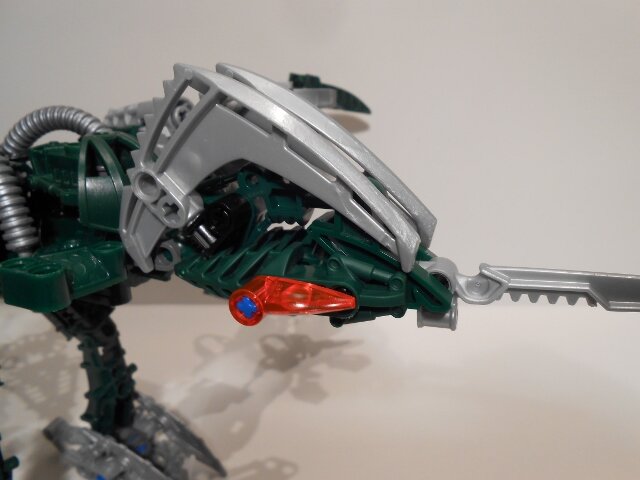 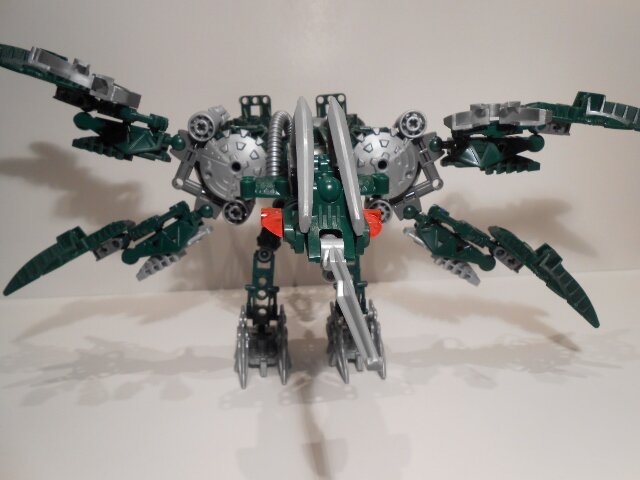 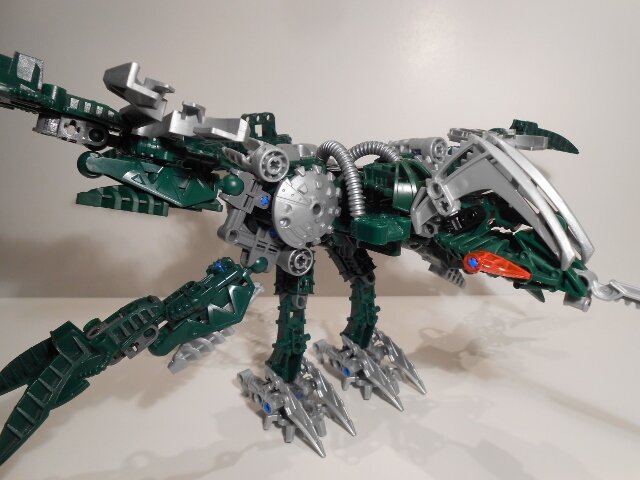 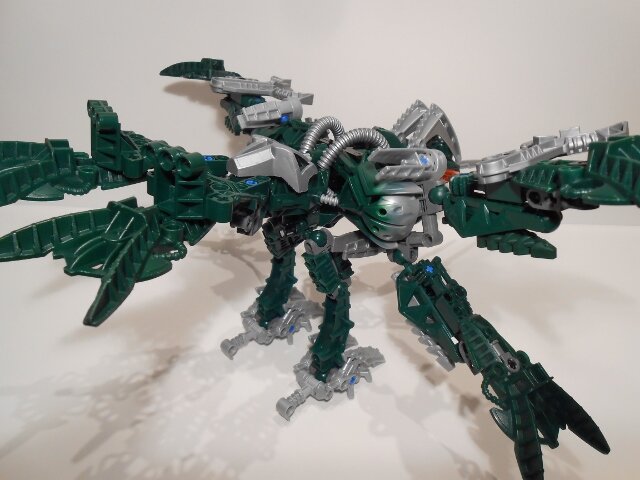 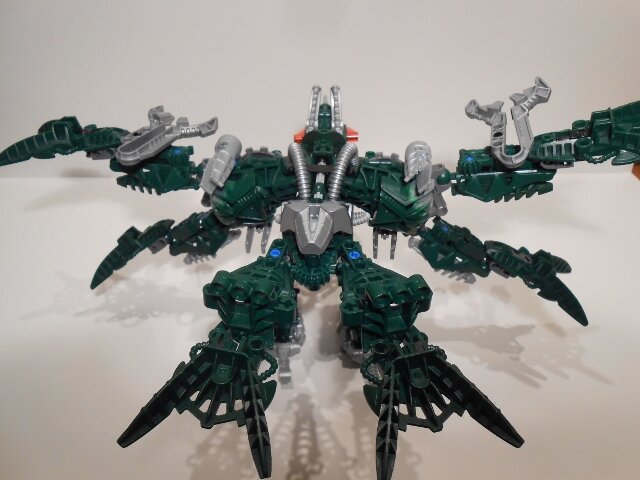 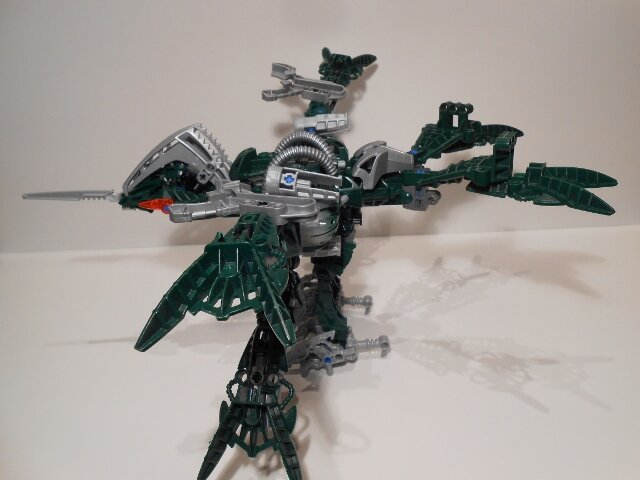 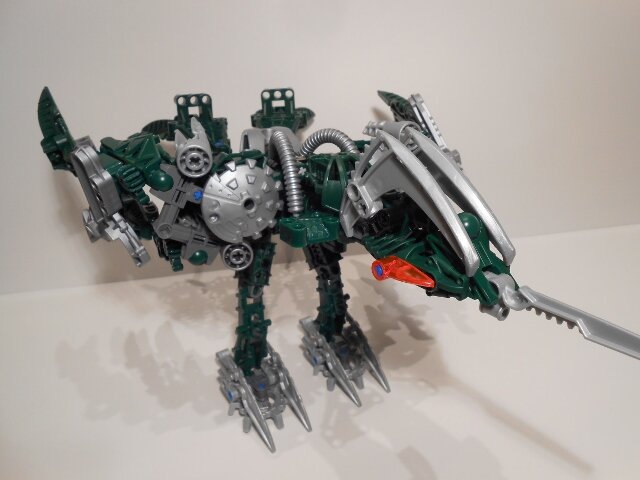 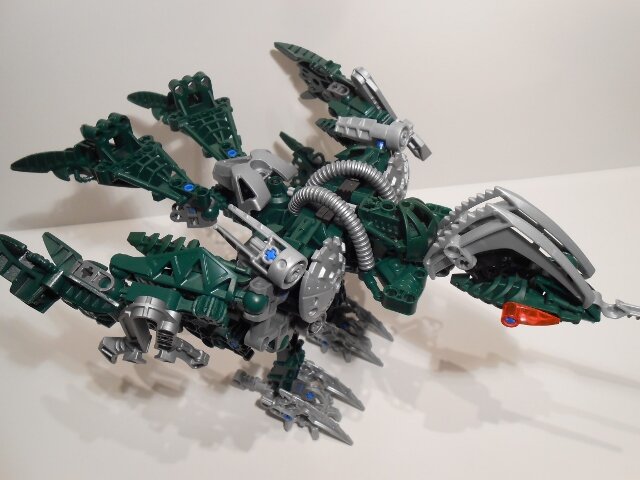 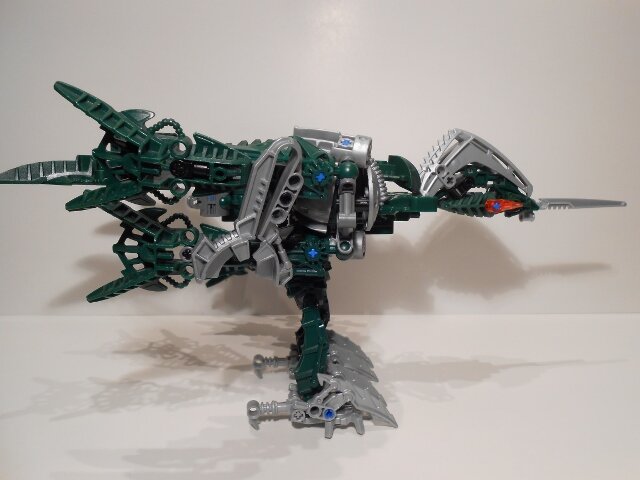 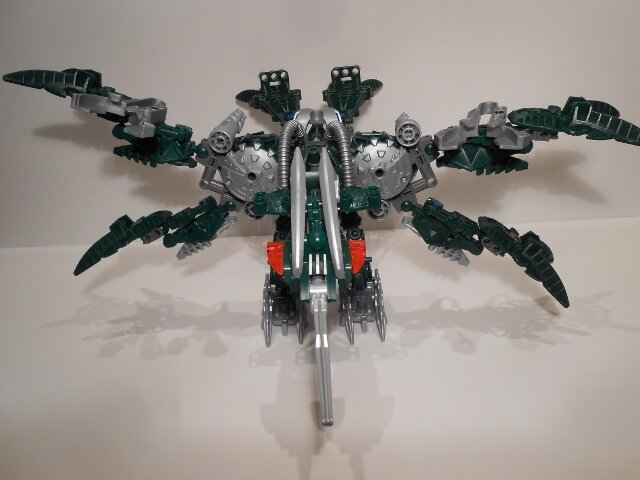 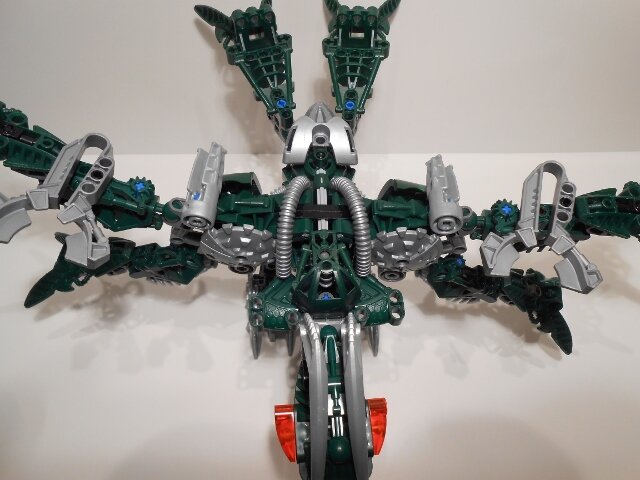 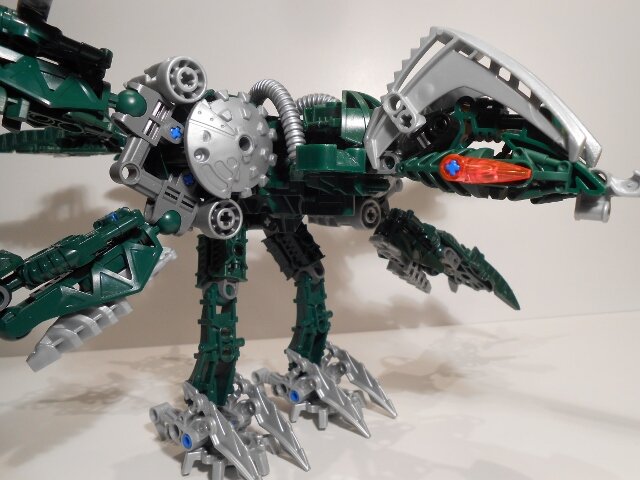 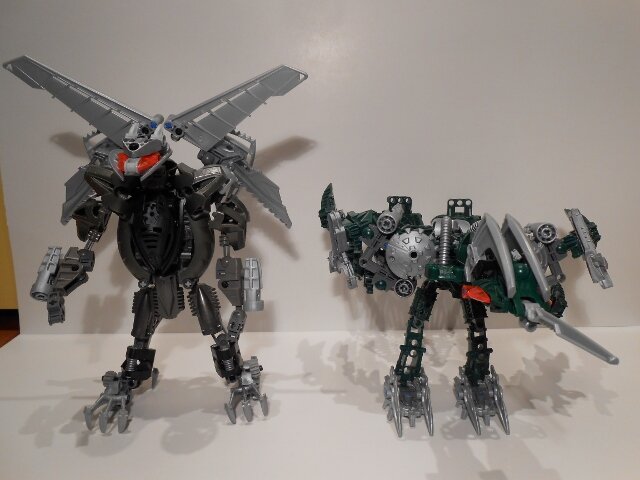 Powers and Weapon: “Birdkeeper” has a psionic ability to control bird Rahi, as well as most other types of winged or flying Rahi, but it is most effective with bird-like Rahi. Though he is unable to command small flying insects, only larger ones like the Nui-Rama. This psionic ability also allows him to instantly train these creatures, making them obedient to his commands without the need of activating the power every time. Especially useful for when he is away on missions and someone else has to attend to the bat-winged Rahi.

His only weapons are a pair of gauntlets that can create regenerating crystals. For noncombat purposes, “Birdkeeper” will use this to create nests for his pet Rahi. In combat, he uses it to create a large nest shaped arena to trap targets in and allow his Rahi to attack. If struck with a strong enough blow, such as from a Pakari, the crystals will shatter to the point where they cannot regenerate. Otherwise they tend to just repair the damage that was done to them. The crystals are unable to form on beings and instead will feel more like a cold blast of energy.

Rahi: “Birdkeeper” has six Rahi that he takes with him on every mission as they are his favorite of all his pets. They are a Phase Dragon, Klakk, Lohrak, Lava Hawk, Mata Nui Fishing Bird, and a Taku-esc Rahi. The Rahi are what you would expect, just more aggressive. That is, except for the Lohrak and Taku, who are slightly different from their normal counterparts.

For the Lohrak, it’s just bigger than normal, but the Taku can turn into a large, monstrous combination of its related kin. It is large and strong like the Gukko, having a similar body and four wing like it, but the wings are larger and thicker, much more similar to the Kahu’s wings. Its beak can be a long, straight stabbing weapon or bend into the shape of Kewa’s curved beak for hooking attacks and has the crushing jaw strength of the Kahu. It has legs like the Kahu and the sharp talons to grab and dig into enemies, as well as an automatically reloading, rapid fired disk launcher installed in its back. The disks are powerless, but it can fire them at targets.

Of the six, “Birdkeeper” tends to ride the Phase Dragon as it is fast and easy to dismount.

Personality: Often humming and singing bird songs, “Birdkeeper” appears to be generally in good spirits. Though speaking with him tends to cause frustration as he speaks in clicks and clacks like the birds. He seems to enjoy causing such frustrations and is likely why he rarely speaks in Matoran. He is very fond of all flying Rahi, but loves bird Rahi the most. Should you harm, or even dare kill, one of his beloved pets, he will surely end you.

Background: It is unknown when or why “Birdkeeper” joined the Dark Hunters, only that he did at some point in time. Due to his love of bird and flying Rahi, as well as his abilities to train them, he was placed in charge of the bat-winged Rahi the Dark Hunters used to send messages. It was his duty to make sure the creatures went where they were supposed to and that the messages were delivered on time. Should they fail to return or get intercepted, “Birdkeeper” will go out with his posse of Rahi to eliminate those responsible. As “Birdkeeper” never reads the messages, only sends them out as told, he has unknowingly also been sending messages for the Order of Mata Nui.

I have nothing to say. this is the best one of these I’ve seen. Your right, thin legs are not an issue here. Good job!

I love that bird, the technic and flight boosters look really cool, the claws are an interesting design.

This looks great! I can’t think of any critiques, so that’s a good thing

I have nothing to say. this is the best one of these I’ve seen. Your right, thin legs are not an issue here. Good job!

I love that bird, the technic and flight boosters look really cool, the claws are an interesting design.

This looks great! I can’t think of any critiques, so that’s a good thing

I don’t trust that tongue there sir! Put it back.

Nice head builds for both of them!